Your parents may have sat you down as a teenager and taught you about the birds and the bees. They may have simply left you to the Internet and your hopefully informative health teacher to learn about being sexually active. Regardless of how you were brought up, Planned Parenthood has always been a place for guidance if you ever needed it. But what does it mean to need Planned Parenthood?

Photo: Protestors are seen here outside of the building site for a new Planned Parenthood in Portland, Oregon.

Photo: Protestors are seen here outside of the building site for a new Planned Parenthood in Portland, Oregon.

Many Americans see Planned Parenthood merely as an agency that provides abortions and emergency contraceptives, but that is far from all it has to offer. Planned Parenthood is a resource for those who need critical services and may not have another option. While they do offer abortions, birth control and emergency contraceptives, Planned Parenthood also provides free education and information about body image, general healthcare for men and women, relationships, sex and sexuality, sexual orientation and sexually transmitted diseases (STD). This information is vital in today's media-dominated culture.

According to Planned Parenthood's website, for more than 90 years it has "worked to improve women's health and safety, prevent unintended pregnancies, and advance the right and ability of individuals and families to make informed and responsible choices." Yet Planned Parenthood clinics around the nation, including those in Maryland, are forced to hide behind barbed wire and hidden addresses while people stand outside protesting something they don't fully understand.

The recent controversy created by the Susan G. Komen for the Cure Foundation has undermined the Planned Parenthood's efforts to help millions across America, in more ways than just providing abortions. Oscar-nominated actress and long-time supporter of Planned Parenthood Maggie Gyllenhaal said it perfectly: "Attacks on Planned Parenthood are attacks on women's health."

The Komen for the Cure Foundation revealed earlier this year that its partnership with Planned Parenthood, a partnership that many supporters of both organizations were completely unaware of, was on the fritz. The foundation released a statement that it would pull all funding to Planned Parenthood due to new guidelines that prevented it from supporting any organization under investigation. This was a valid excuse, but it was later proven to be a complete cover-up when another release revealed that funding was being cut due to Planned Parenthood's inability to spend Komen's money on breast-cancer-related treatments.

Komen, obviously confused, later reversed the decision in the light of the controversy that it brought. 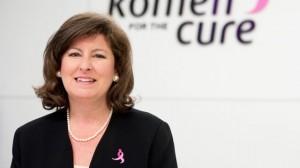 Photo: Karen Handel, former Secretary of State in Georgia and now former Komen executive, is being criticized for leading the once respectable organization into political turmoil.

Photo: Karen Handel, former Secretary of State in Georgia and now former Komen executive, is being criticized for leading the once respectable organization into political turmoil.

An insider linked to Komen recently told the Huffington Post about the real reasons breaking ties with Planned Parenthood. The source told the Post that Karen Handel, "Komen's staunchly anti-abortion vice president for public policy, was the main force behind the decision to defund Planned Parenthood and the attempt to make that decision look nonpolitical."

People responded to Handel's actions by showing their support for Planned Parenthood. Donations poured into Planned Parenthood's Federation of America's Breast Health Fund; the organization has received over $3 million in donations thus far. Americans' support gives hope to anyone who cares about reproductive rights. Additionally, the organization ensured donors, via email, that every dollar received will go towards breast exams, diagnostic services, breast health outreach and education.

As a result of a plethora of complaints and a heated letter sent by former Komen board member Eve Ellis saying that Komen needed to "clean house,” Handel resigned on Tuesday, as reported by the Los Angeles Times. This recent update gives Komen a fresh start towards rebuilding the foundation's reputation.

Handel was by no means the first to undermine Planned Parenthood's funding. Texas governor and presidential candidate Rick Perry sliced through funding that would have provided low-income women with cervical cancer screenings, birth control and STD prevention and treatment. New Jersey Governor Chris Christie took $7.5 million out of New Jersey's budget that was intended to make centers available to women for birth control and pap smears. Regardless of the politicians trying to defy the odds for women in need of these services, and no matter what any anti-choice organization head - who is supposed help those in need - does, Planned Parenthood will always survive.

In a letter from a Planned Parenthood supporter, the writer states, "You can try to make it impossible to get birth control. But you know what you can't do? You can't win. You can't break us. Planned Parenthood isn't just a family of organizations. It's a movement. It's women and men of all ages who believe that health care – including reproductive health care – is a basic human right."

Take that Susan G. Komen, Rick Perry and Chris Christie. Take that to anyone who dares to tell someone what he or she can or cannot do with their body. Planned Parenthood is alive and millions stronger. It's your job to learn about the organization's mission and what you can do to support it.