Analysis of Identity and Equity in STEM: A look into the STEM field

This new class highlights the connection between STEM and social issues

When sixth period begins, students in the new Analysis of Identity and Equity in STEM class aren't taking out calculators or protractors like they would for any other STEM course. Instead, the students gather around for a discussion on the relationship between standardized testing, race, and inequity.

A new but much-needed course, Analysis of Identity and Equity in STEM is unlike any other STEM elective at Blair. Co-taught by Elizabeth Duval and Rahman Culver, who himself is an alumnus of the Blair Magnet program, this course focuses on the social and systemic issues in the STEM field rather than the field itself.

This discussion-based class offers its students a place to voice out their own thoughts and experiences in the STEM field. So far this semester, discussions have focused on how a person's race, gender, sexuality, and socioeconomic status can influence their experience in STEM. 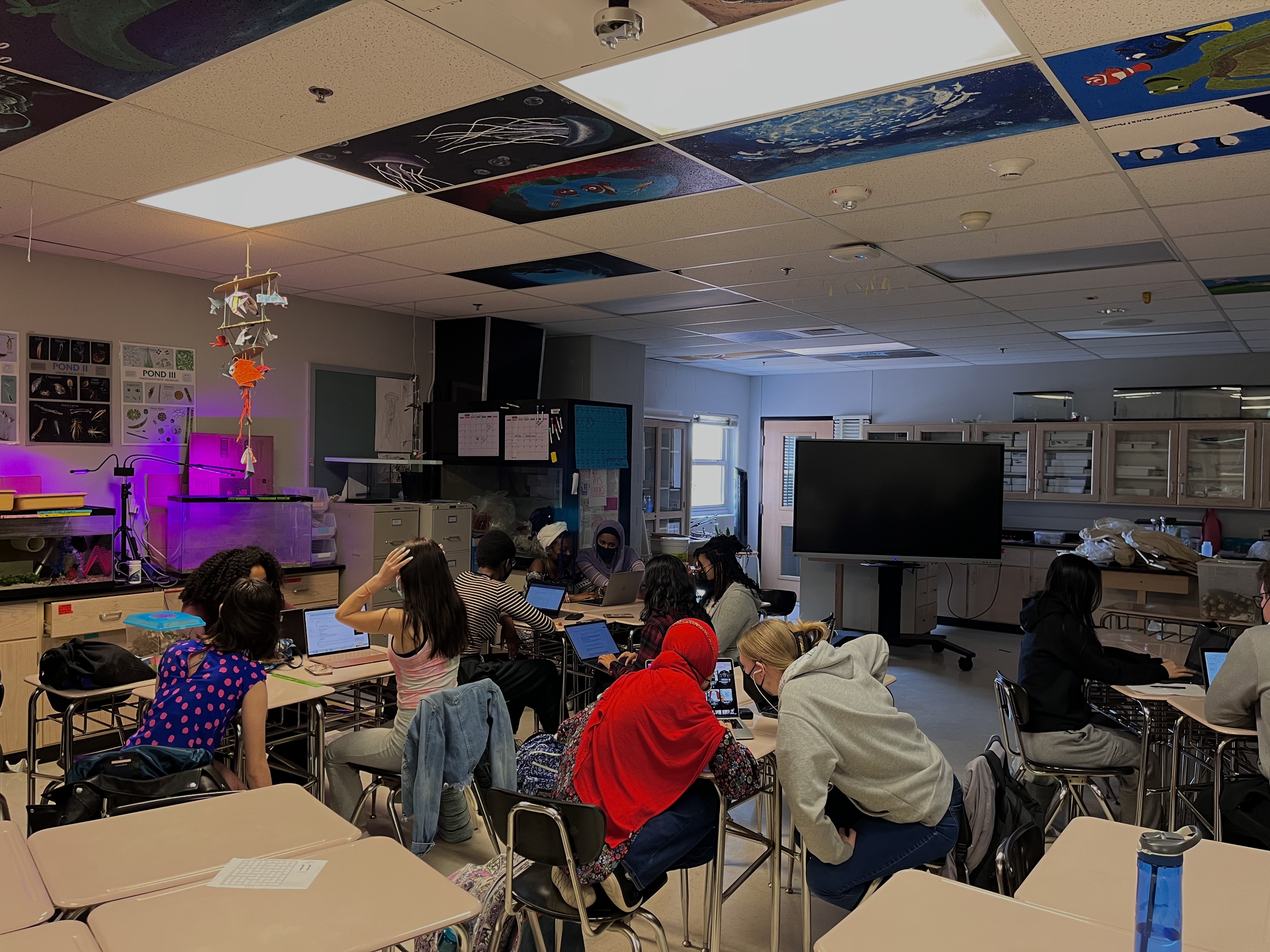 Analysis of Equity and Identity in STEM

Photo: The class is discussion-based and focuses on issues in the STEM field.

Photo: The class is discussion-based and focuses on issues in the STEM field. Photo courtesy of Ethan Zajic.

STEM subjects, such as physics or math, can often be seen as "objective" and unaffected by social issues, especially when compared to the humanities. Social issues have been considered more closely tied to humanities because "humanities" are usually more associated with things that have to do with humans. However, STEM does not exist in a vacuum and is just as affected by biases and social issues as much as any other field.

For example, one of the most glaring issues in the medical field is the fact that Black women are three times more likely to die from a pregnancy-related cause than white women. This is due to a variety of reasons, from implicit bias to unequal amounts of access to higher quality healthcare. Fixing this disparity for Black women requires these social issues to be brought into awareness and discussed in the medical field.

Many of the problems in the STEM field manifest themselves at Blair too, including in Blair's STEM magnet program. Due to the lack of diversity in the program, students underrepresented in both the program and in the STEM field– for example, Black students –must confront issues such as imposter syndrome and casual racism.

Senior Raniya Delil, a student in the class, is a Black student in the magnet program, and has dealt with her share of microaggressions in her classes. For example, in one of her computer science classes, Delil has been in group projects when her partners would ignore her input.

As described by senior Lydia Melkamu, another student in the class, the fact that students' voices go unlistened to when they speak out is just as much of an issue as the microaggressions themselves. "A problem with the magnet program is that there is a trend where there are issues and students bring them up to administration but there’s sometimes not enough or nothing done at all," Melkamu explains.

Beyond its goal to tackle pressing issues in the STEM field, this course at its core provides students that are underrepresented in STEM a safe place to share their own experiences. “A lot of students feel like they’ve been starved for space to talk about some of their experiences here at Blair so we’re thankful that this class is providing that,” Culver says.

Although magnet-specific issues are discussed due to the nature of the program and of the course, this class is not a magnet elective and encompasses all parts of the STEM field. However, the origin of this course is strongly tied to the magnet.

The idea for this class first sparked in the summer of 2020, right after George Floyd's murder and when Culver began talking with another Blair magnet alumnus about the events happening around the nation. This was also when another Blair alumnus published an article about the anti-Blackness in the magnet program. This article first gave Culver and the other alumni the idea to create this course. "So we were just talking about [what we could do] to be responsive in this moment, and that’s when the idea came in,” Culver explains.

After discussing the original idea for this course, Culver also reached out to many other Blair magnet alumni to write a proposal for a grant to support its curriculum development. This was when Duval first heard about this course and became involved in its development. “I remember hearing rumbling murmurs that this class was going to exist and I [sent] Ostrander an email, and I was like ‘I’m in, I want in, what can I do?’” Duval says.

Culver, Duval, and other Blair alumni spent the summer of 2021 developing the curriculum to ensure that the course would cover as many social topics and issues in the STEM field as possible. "Although race clearly is a major issue, so are things like gender, sexuality, all sorts of things. We wanted to make sure we could encompass as much as we could," Duval says.

The current curriculum consists of five units: identity and intersectionality, history of inequity, systemic barriers, education and STEM, and disrupting inequity and fostering change. However, both Duval and Culver emphasize that the curriculum remains flexible and open to change due to the continuously developing current events that pop up in the news.

For junior Amina Mokhtarzada, one of the great things about the current class structure is how much the discussion topics vary. The importance of having ranging subjects lies in making sure that each student can relate to the topics in some way. "Based on the week, there's different things people can resonate with," Mokhtarzada says.

In addition to creating a more welcoming environment, the diversity in the class also helps all of its students broaden their perspectives through learning about other people's experiences in STEM. "I think this is one of the only classes where I've been like 'Wow, everyone's here,' and I think that it's cool because when we have discussions, someone will say, 'Hey this is what I've gone through,' and it could be something completely new— something that you've never heard before," Mokhtarzada says.

Although this course might not be what first comes to mind when people think of a STEM course, it is just as important as classes like math or chemistry. Social issues are usually associated with the humanities field, but the STEM field does not exist in a vacuum– recognizing that it is just as affected by inclusivity and diversity as any other field is vital, and this class helps students with exactly that.