There are more ways than one to skin a cat

Underneath Anatomy and Physiology teacher John Haigh's glistening scalpel lies a dead creature, one eye ajar, tongue sticking out and front legs stretched next to its face. Haigh's students squirm, smile and giggle nervously as he begins demonstrating the day's lesson: identifying various muscles in a dissected cat.

For almost the entire third quarter, students in Anatomy and Physiology classes will gain invaluable hands-on experience by painstakingly analyzing the insides of cats. During fourth period on Feb. 11, Haigh's students continue their dissections with varying degrees of enthusiasm, attempting to ignore the nauseating smell of preservative and diving headfirst into the intriguing world of feline analysis. 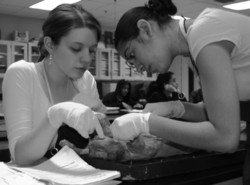 As Haigh demonstrates, senior Alyssa Marzullo and her group members don aprons, gloves and protective goggles. They remove their cat from a tightly secured bag and place it on their workbench. Nearby is a case of tools - assorted sharp, curved and oddly shaped devices straight out of a torture scene in a Bond movie. Before Marzullo has a chance to use the dissection gear, she shudders in disgust. "I already got cat stuff on my hands!" she says.

In the back corner, seniors Melissa Michel and Lane Alvarez are diligently removing tissue from their cat's lower torso to expose its muscles. Michel reluctantly cuts with scissors while Alvarez holds the cat in place. "I try to look at its body - I try not to look at its face," Michel says, snipping a flap of skin.

Alvarez deals with what he calls the "trauma" of cutting open a dead cat by cracking jokes. "This cat looks like my aunt's cat, and that one died. Maybe it's the same cat," he says with a wry smile. While Michel is taking a break, Alvarez toys with the cat's tongue. "It feels cool," he says.

Anatomy and Physiology teacher Leslie Van sees cat dissection humor like Alvarez's all the time - one of her groups named their cat Simba (after the Lion King character). Another student held his cat's front legs and performed an impromptu waltz as Chamber Choir singers serenaded a classmate on Valentine's Day.

Some students, like Michel and Alvarez's group mate, senior Meena Singh, prefer to stand back and observe the procedure. Although she cringes at the sight of the cat's exposed innards, she acknowledges the educational value of the dissection. "We're trying to find out something about cats," she says. "I know more than before about anatomy."

Van says that while some students have initial fears of dissecting cats, most become more engaged in dissection as the activity continues.

Occasionally, Haigh and Van have students who reject cat dissection on moral grounds; Haigh even had a student withdraw from his class last year when she learned the dissection was in the curriculum.

Junior Mollie Segal, who owns five cats, refused to even consider taking anatomy classes because of her opposition to dissection. "I find it sadistic because it's disrespecting the dead," says Segal.

According to the American Anti-Vivisection Society, approximately 100,000 cats are dissected in classrooms across the country each year. Van attributes the popularity of cats over other commonly dissected animals to their conveniently small size, low price tag (about $50 each) and similar anatomy to humans. "Size-wise, price-wise and anatomically, cats make the most sense," says Van.

Jamie Aitchison, a spokeswoman for the National Anti-Vivisection Society (not to be confused with the American Anti-Vivisection Society), believes that animal dissection is wrong on not just moral grounds but social grounds as well. "Dissection desensitizes compassion towards animals. They're not here to be our playthings; they're here to spend their time on earth just like us humans," she says.

On the other hand, Dan James, vice president of business development at Carolina Biological Supply Company, which provides Blair with cats, says that efforts to stop dissection would not mean more cats are saved. "We get the cats from animal shelters in Mexico, already dead or the ones that they are going to put to sleep," says James. "It's not like any fewer animals are going to be killed if we stopped providing cats."

Unfortunately for animal rights advocates, Haigh and Van agree that cat dissections will continue in Anatomy and Physiology classes for the foreseeable future.

Singh, now seemingly over her qualms, endorses the dissections. "In the end, the reason we take this class is to learn about the body," she remarks. "What better way is there than to look inside?"

Kiran Bhat. Kiran Bhat is a senior who loves the Washington Redskins, 24, Coldplay, Kanye West, Damien Rice, Outkast and Common (Sense). He aspires to be the next Sanjay Gupta. He will miraculously grow a Guptaesque telegenic face and sculpted body by the age of 30. In … More »