And a happy new year

With 2007 coming to an end, it'll soon be time to pull out the champagne and sparkling cider to toast the start of 2008. Resolutions will be made, and the impossible goals of weight loss and the elusive four-point-oh will be tossed around. But as the big ball drops in New York City to the tune of "Auld Lang Syne," countries around the world will have already celebrated their New Year with their own longstanding cultural traditions.

An essential time in the eastern world

Possibly the most widespread New Year's celebration, other than the internationally celebrated Jan. 1, belongs to the Chinese, whose traditions have spread to neighboring countries and have great significance in the oriental world. Asian nations base their New Year on the lunar calendar, which is different from the 12 month Gregorian calendar that has become the international standard. The first full moon in the lunar New Year, which falls at the end of January or the beginning of February, marks the first day of festivities – the entire celebration lasts 15 days.

In the Orient, the lunar New Year is a time for the family to be together. Family members gather on the first day of the New Year to pray for their ancestors, creating a small alter inside their homes and offering them symbolic food. "We invite them to come back," says Thanh Tu Nguyen, a Blair ESOL teacher who celebrates the Vietnamese New Year. It is important that the ancestral spirits celebrate the New Year with the living family members.

Many who celebrate the lunar New Year are Buddhists. They generally go to a temple or shrine to pray for their wealth, prosperity and ancestors. According to an online guide to Japan, several million people visit the Meiji Shrine in Tokyo during their New Year, which no longer follows the lunar calendar and occurs from Jan. 1 to Jan. 3.

There are many variations to these traditions all over the Asian world. But as the customs spread from Eastern Asia to the United States, the meaning is sometimes lost on the next generation. In China, adults give children red envelopes filled with money to represent prosperity in the coming year. Like others of his generation, sophomore Devin Zhang knows little about the cultural significance of the New Year – only that he receives money. "I didn't really think about what really happens during the New Year," Zhang says.

Like the East Asians, Jews follow a different calendar when celebrating their New Year - Rosh Hashanah. The holiday takes place on the first and second days of Tishri, a four-week period between September and October. Yom Kippur, or the Day of Atonement, also occurs in Tishri, and together Rosh Hashanah and Yom Kippur are considered the most important holidays of the year, according to Holidays on the Net.

Rosh Hashanah, literally meaning "head of the year" in Hebrew, is a time for reflection. Those who celebrate look into their faults in the past year and plan changes for the next year, according to Judaism 101.

Hannah Simon, president of the Jewish Culture Club at Blair, celebrates the New Year by attending special religious services - one at sunset before Rosh Hashanah and one on Rosh Hashanah. During these religious services, Jews sing passages from religious scripts, using a special rhythm called a trope. "At my temple, students are chosen to chant the portion from the Hebrew bible," she says. "I have chanted for the past three years."

During Rosh Hashanah, Jews celebrate and have parties, especially relishing their meals. They eat challah, bread specially cut into a round shape to symbolize the "head of the year." The food prepared is generally sweet, representing the hope for a pleasant year. "The challah has raisins in it for sweetness," Simon says. "Additionally, Jews eat apples dipped in honey to again symbolize a sweet New Year." 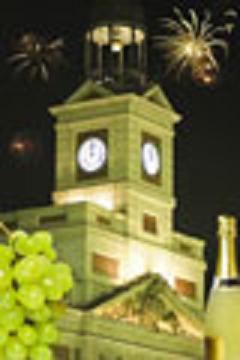 Photo: The Puerta del Sol clock, used to officially count down to the New Year in Spain. Photo courtesy of Unlisted Images, Inc.

Photo: The Puerta del Sol clock, used to officially count down to the New Year in Spain. Photo courtesy of Unlisted Images, Inc.

Food is important in Spanish tradition as well. The Spanish, who celebrate their New Year with the Gregorian world on Jan. 1, see the night as a social event. Their tradition of eating one grape per second for the last 12 seconds of the year is an accomplishment that not only wows onlookers, but also entitles bragging rights among friends.

On Dec. 31, Puerta del Sol is to Madrid as Times Square is to New York City. The Spanish bring bags of 12 grapes to the square, where the infamous clock tower will officially set the grape-eating pace by ringing 12 times to end the year. "[The tradition is] the beginning of a whole night party," says Spanish teacher Maria Cuadrado-Corrales, who usually flies to Spain during winter break to celebrate with family and friends.

The tradition began in 1909 when farmers had extra grapes from an excellent harvest and wanted to encourage purchase of the fruits. Cuadrado says that she has been chomping down on grapes since she was a girl growing up in Spain. "I've been doing it ever since I can remember," Cuadrado says.

According to Cuadrado, the grapes must be popped in rhythmically, since there is no time to chew. She suggests following a bite and swallow combination. "If you break the rhythm, you spit it all out," she says.

Aside from the grapes, the event is all formal. Those who go out to party wear a suit or dress. "It's probably the most important social party of the year, like prom in the United States," Cuadrado says.

And whether the New Year entails grape-eating or glass-clinking, everyone feels the significance of a new beginning as they celebrate with family and friends. Cheers!