And the award goes to...

Here at Blair, we have some pretty spectacular students. They win a lot of stuff. SCO presents to you a list of recent awards and their respective recipients, to be updated as often as people win stuff—so start entering those competitions now!

Junior Edward Fineran was the Maryland winner in the 2014 National Peace Essay Contest. There was one winner apiece from 46 states, Washington, D.C. and the categories for American territories and Americans living abroad. He earned a $1,000 academic scholarship.

Senior Adrianne Kehne was named to the All-Met Rowing Team by the Washington Post.

Junior Jingjing (Annie) Xu won third place in the 2014 MMEA Young Composers Project competition for her piece "Arkadia," written for the piano, flute and voice. Annie will be honored at the MMEA Fall In-Service Conference on October 17, 2014. 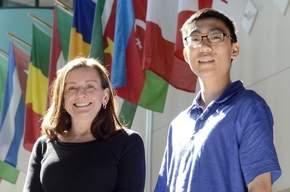 Junior Kiyoon (Brian) Ko won first place in the 2014 NAfME Electronic Music Composition Contest. His composition "Underwater Aria" will be featured on the NAfME website as the winner in the Grades 9-12 category.

Senior Neil Davey was named the winner of the 2014 Maryland BioGENEius Challenge, the premier competition for high school students that recognizes outstanding research in biotechnology. As this year's winner, Davey will be granted insider access to the 2014 BIO International Convention, the industry's trade conference. He will also continue on to the National BioGENEius Challenge.

Senior Nathan Schilling was one of 24 winners of Northrop Grumman Corporation's 12th Annual Engineering Scholars Program. He will receive a scholarship of $10,000 distributed throughout four years.