English teacher Keith Anderson was presented with the Gazette's annual "My Favorite Teacher" award during a ceremony honoring him and the other winners held on Monday evening at the Rockville Hilton. Anderson was nominated for the award by a former AP Language student, senior Warren Zhang. 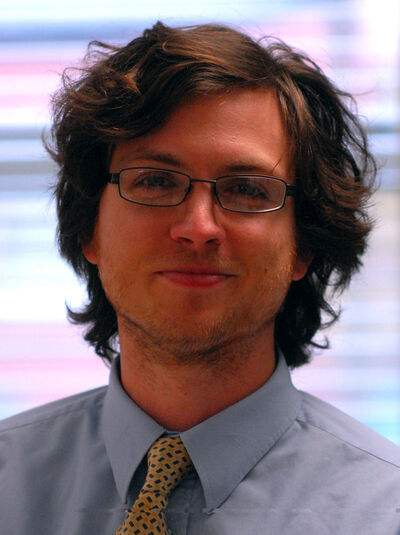 Anderson was astonished by his win and appreciated the fact the students took the time to vote for him. "I was incredibly surprised and flattered," he said. "The fact that people went out of their way to vote was really very neat."

The ceremony was also a surprise to Anderson, who expected it to be much smaller. "The ceremony was awesome. It was the first time I had ever been personally honored with an award. I was not expecting it," he said.

Anderson, who began teaching five years ago, says that his students are his favorite part of being a teacher and feels that he is able to better relate to his students because of his enthusiasm for teaching. "I think my students can sense that I'm excited to teach," he said. He feels that he can relate to his AP and Honors students' willingness to learn. "If you're excited, it resonates with them."

He also feels a great responsibility in teaching his non-AP and Honors students who may feel less enthusiastic about school. "It's easy to celebrate the kids who make the school look good," he said, but noted that it is important to provide support and attention to students who are not enrolled in high-level courses. "You have to show them that you care about them," he said.

Zhang expressed in his nomination essay how Anderson's unique teaching style and dedication to his students made him an outstanding teacher. "His energetic demeanor, challenging assignments, insightful edits and lively class discussions make his...by far the best English class I have ever taken," Zhang said in the essay.