Some Blair students see military service in their future

Within the last month, hundreds have been killed or wounded in terrorist attacks around the world. The issues within the Islamic State of Iraq and Syria have only gotten more tense, and despite President Obama's claims that the war on terror is over, very little has changed. Many might think that such violent global unrest would deter Blair students from joining the military - and yet, the opposite is true.

Blair junior Thomas Norris waves away these concerns with one brief statement. "If anything it's made me more dedicated to my decision to serve because I want to keep my friends and family safe," Norris explains. Others students share this conviction. "The constant state of unrest in the Middle East has actually made me want to join more," freshman Willis Moran says. 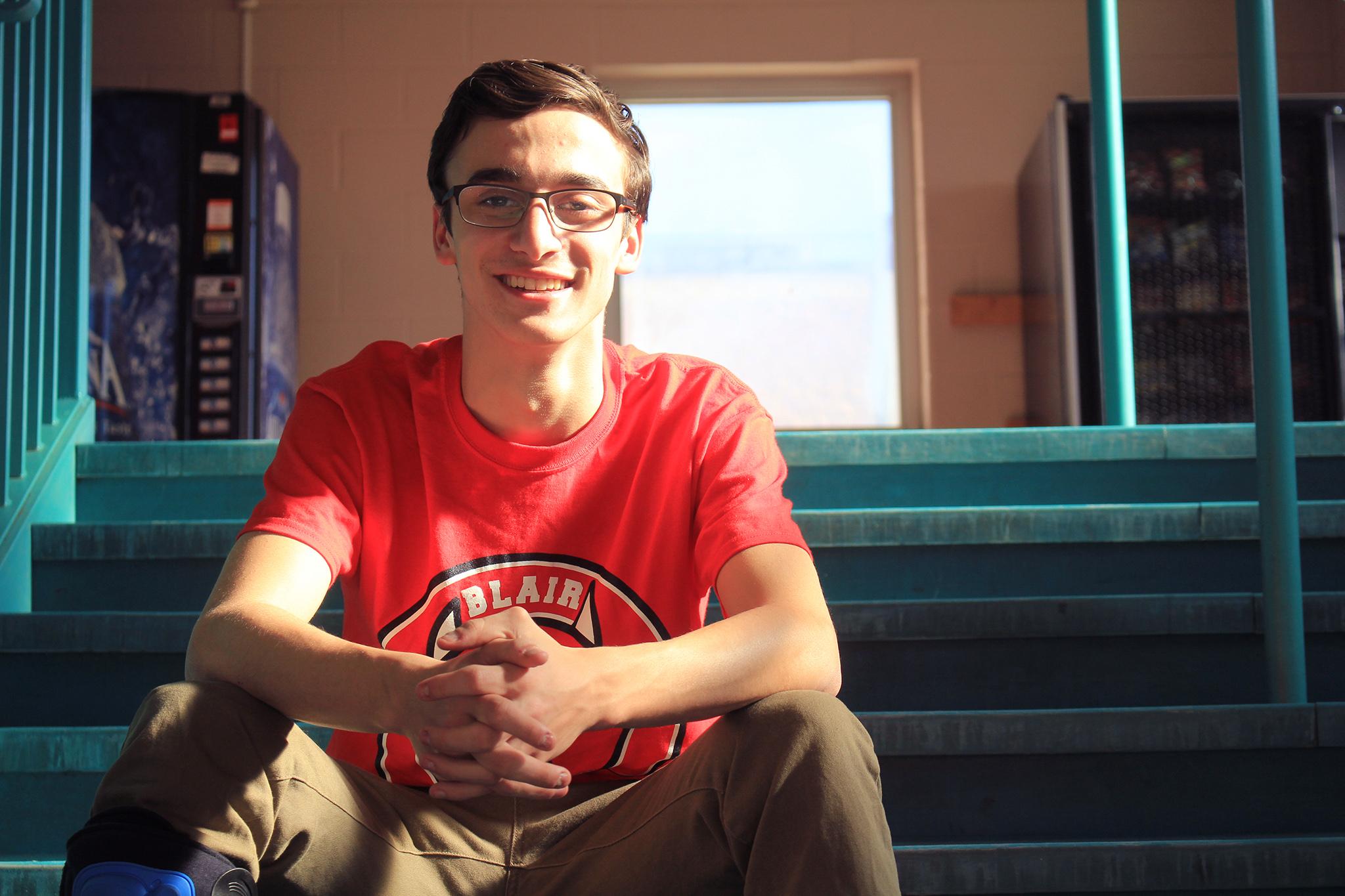 But could someone at Blair help stop the people that mean to do harm? And what convinces Blazers to risk their own lives in the defense of others? These dedicated students explain what drives them.

Reasons behind the decision

Norris sits back in a metal desk, arms crossed and legs spread apart, cool as a cucumber. "I definitely believe that I am indebted to this country," he states carefully, leaning forward and growing a bit more serious. "America has fed me, housed me, educated me, and given me more opportunities in life than I could ever ask for. For me, serving in the military seems like the best way to show my thanks."

According to a 2011 Pew survey 90% of people who join the armed forces do so out of a sense of duty to their country. But for some, the reason is much more personal.

"I don't feel like the college environment is one that suits me. The military is a place where I feel like I would fit in well," junior Ezra Grimes says, trying to put into words what he has been thinking about for most of his life. "It seems like a way I can help people in a much more tangible fashion than any other area I'm interested in."

"This one's hard," starts junior Dominic Massimino when asked why he is considering enlisting. "One of the main reasons is the prospect of a free college education. I would also be really proud to serve my country." Massimino's financial reasoning is shared by 77% of post-9/11 military veterans.

Many different aspects of a student's young life can contribute to their success as a soldier. "It may sound strange, but I think that running cross country and track have given me some qualities that would make me a good soldier," Massimino says. He is a captain on Blair's varsity cross country team, thanks in large part to his strong, lanky build, devoted training and perseverance. "Mental toughness is one of those traits. Flo Groberg, the most recent medal of honor winner, was a cross country runner at Walter Johnson, which I think is interesting," Massimino says.

This mental toughness is part of what drives sophomore Deanna Williams as well. "I really want to defend the country that has given me so many opportunities," she says. But more important than this toughness is her devotion to those around her. "I can see a lot of things wrong with the way the country has handled the situation with terrorism, and I'd like to help fix things," Williams adds. Norris knew without hesitation which quality would most help him to be a successful member of the armed services. "The dedication I have to this country and my desire to help other people is what would most qualify me for the job," he says.

"My mom has always been pretty opposed to the possibility of me enlisting, and my dad has been too, but less so. They're just really worried about my safety," Massimino says with a friendly smile. For him, it's a good thing that his parents love him enough to voice their concerns.

Oftentimes, family experience with the military can change overall impressions. According to Norris, his mother's military connections make her less concerned with the possibility. "My mom's really okay with it, probably because she has brothers who were in the military. My dad is too, but he likes to remind me of the obligations that come with service," he says. Junior Nate Chapelle has had a similar experience. "My dad has always been involved with the military, so he'd be really supportive if I decided to enlist," Chapelle adds.

For many parents, the biggest concern is that their children will opt for military service over a college education. "My parents really want for me to go to college first, and they'd be totally opposed to my joining right out of high school," Grimes explains. While parents can be opposed to or excited for their child's decision to enlist, a middle ground can often be reached if it's clear that the interested party is dedicated to their choice. 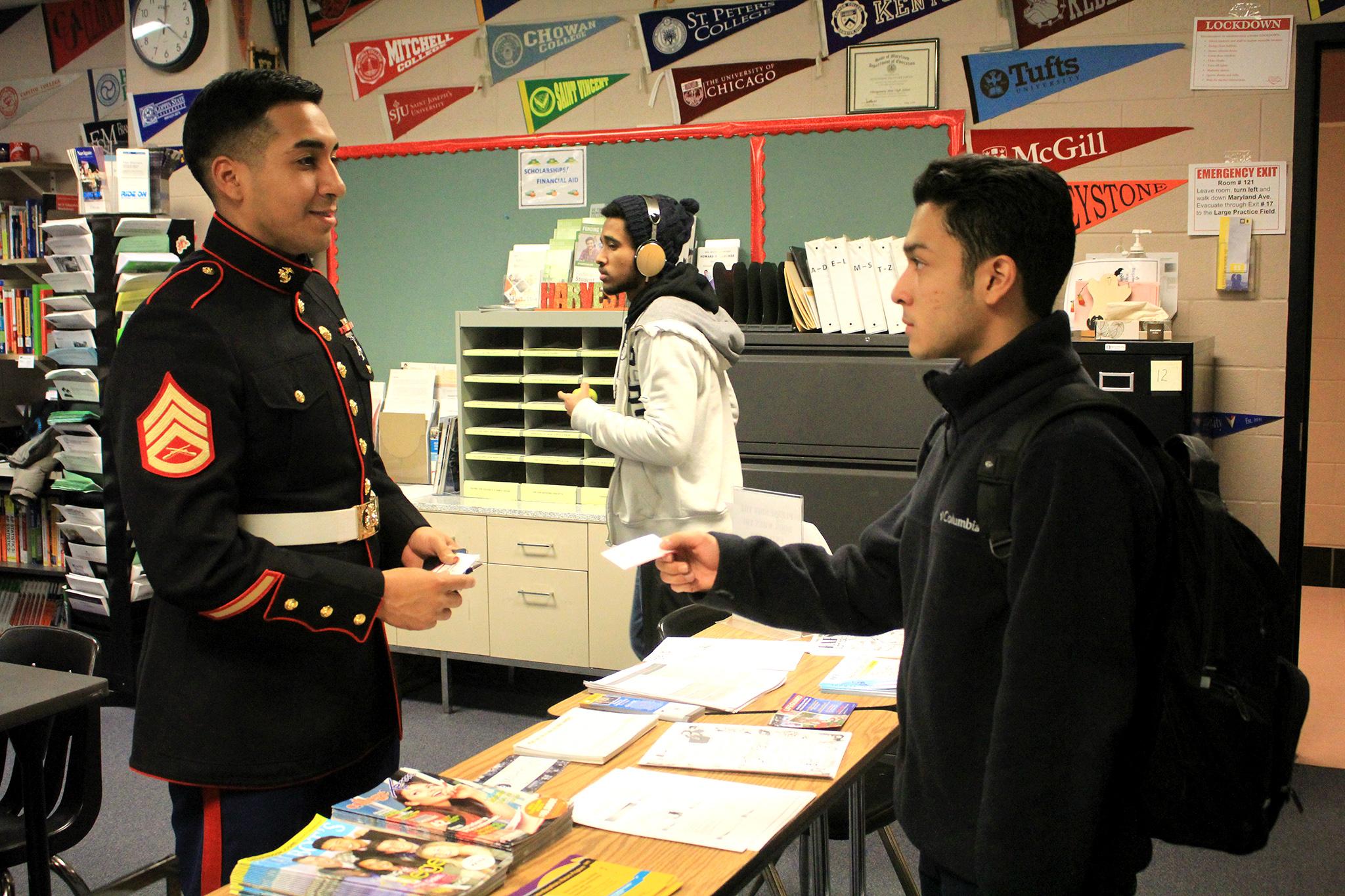 Photo: Opportunities to talk to current active duty members of the military and to take the ASVAB test can be found in the career center.

Photo: Opportunities to talk to current active duty members of the military and to take the ASVAB test can be found in the career center.

Blair provides numerous opportunities for students to prepare for military service. Students can sign up to take the Armed Services Vocational Aptitude Battery (ASVAB) in the Career Center, which tests what enlisted soldiers are capable of academically. Blazers can also talk to current members of the armed forces who set up a table from time to time outside of the SAC.

In today's exceedingly hostile political and social climate, there aren't many things that Blazers can depend on. But one thing is for certain: whether they're sitting next to you at lunch, raising their hand to answer a question in math class or listening to music on Blair Boulevard, there will always be students who are willing to put their lives on the line to defend the beliefs, values and wellbeing of those around them.