A new anti-gang task force along the border of Montgomery County and Prince George's County will form this year with the help of newly attained federal funds, according to special investigations division director Captain David Gillespie of the Montgomery County Police Department (MCPD). 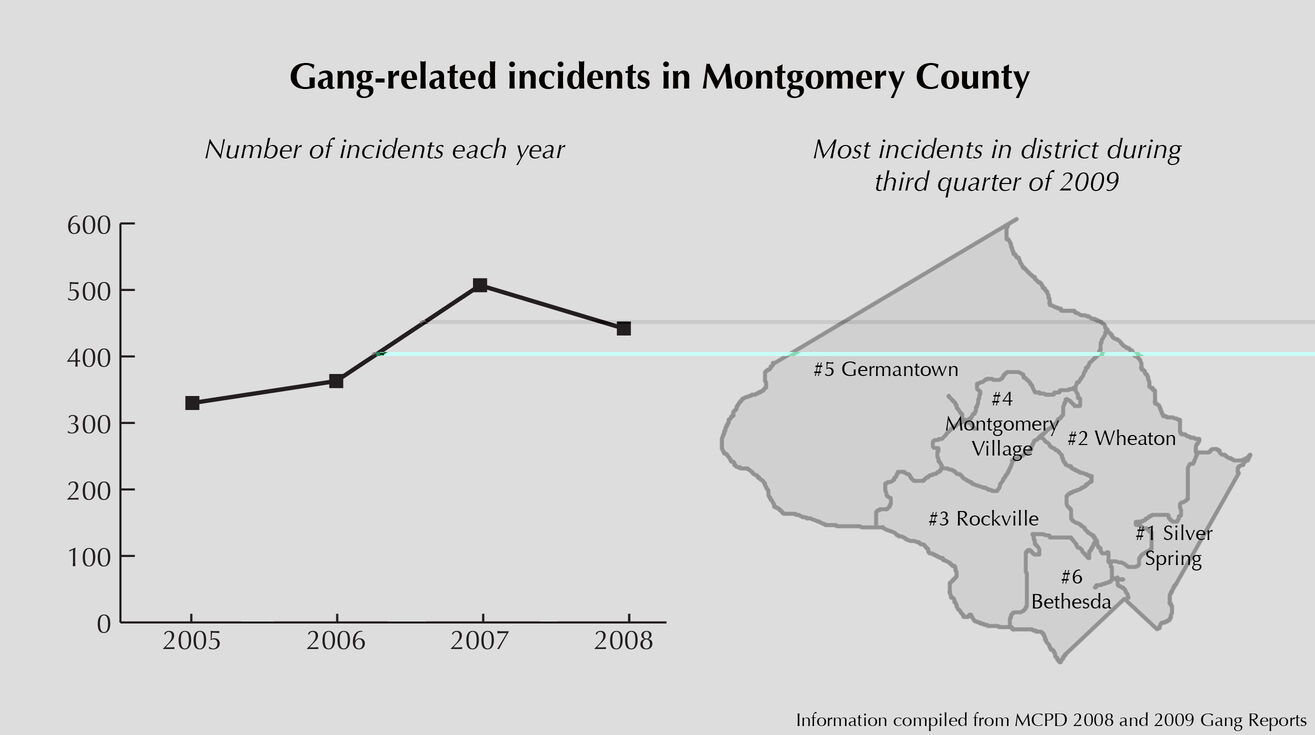 Photo:
The Gang Prevention and Suppression Task Force will be a joint effort between the two county police departments that will involve a currently unspecified number of police officers from both counties' gang units. The State Attorney's Office and gang recruitment prevention programs in each county will also be involved, according to Gillespie.

Although Representatives Steny Hoyer (D-Md.), Donna Edwards (D-Md.) and Chris Van Hollen (D-Md.) have not yet allocated the $2.7 million, it will most likely be split between the two counties' budgets evenly with about $150,000 set aside for administrative costs, Gillespie said. Each participant in the task force will allocate money internally with the help of the High Intensity Drug Trafficking Area organization, said Gillespie. The University of Maryland Public Safety Training and Technical Assistance Program will administer the task force, according to the press release.

According to Gillespie, over the past four years, the police have measured a steady increase in gang-related crime, measured by the number of reported cases that involve a suspected gang member. He said the increase in local gang activity was a key factor in the formation of the task force. Both counties also noticed a lack of coordination between the police forces along their shared border in the Langley Park area. Gangs took advantage of the disparity to act across jurisdictional lines, according to MCPD officer Edward Wilcher. "There have been cases where officers patrol the borders, but because of jurisdictional challenges, that doesn't happen on a steady basis," he said. When the task force takes effect, it will be easier to coordinate activities like patrolling the borders and arresting gang members, Wilcher said.

According to Gillespie, the task force will combat gang activity by focusing on prevention, intervention and suppression, the same three-pronged approach used by each county. Prevention, he said, provides those at risk of recruitment with opportunities through community outreach and youth programs, such as the Street Outreach Network and the Montgomery County Department of Recreation's high school Sports Academy programs. "We are committed to working with the community and non-governmental organizations to prevent our youth from wanting to join a gang," he said.

Intervention involves the police force and many of the prevention outreach programs helping gang members leave gangs by providing adult mentors who can positively influence gang youth, he said. The mentoring programs have already had an impact on potential gang members, according to Gillespie. "By and large, we have a lot of success stories of youth in the community," he said.

With an estimated 1,200 active gang members in Montgomery and Prince George's counties, arrest and prosecution of gang members comprises the suppression component, according to Gillespie. "We have to arrest people who are terrorizing our community," he said.
According to Gillespie, Montgomery and Prince George's Counties jointly requested funding for a gang prevention task force in 2004, which was used to conduct research about gang activity, according to a 2004 report. Gillespie said that the counties asked for $4.6 million, as a follow up, from the 2009-2010 federal budget, but the task force is content with the $2.7 million they received after the grant was altered through Congressional process. "It is a significant amount of money that will help us get our operations running and coordinate much better [than they currently are]," he said.

According to Prince George's County Police Department Captain Marcos Zarragoitia, the task force is modeled after a similarly structured successful effort in Northern Virginia, where police experienced the same problem with gangs working together across county borders.
Gillespie said that if this group proves to be as successful as the Northern Virginia task force in combating crime, the local task force should be able to continue. "If we do a good job of obtaining measurable results, we are hopeful that we will receive federal funding in future years," he said. The Northern Virginia task force spanned many counties in the area so that local, state and federal enforcement agencies could combine forces to prevent and eliminate activity, according to their Web site. According to a 2009 assessment report the Virginia task force published, the group had reduced reported gang-related crimes in every category, from burglaries to violent crime.