In Phnom Penh, Cambodia, Samath Warren and his soccer teammates were practicing for a game the following day. The team scrimmaged, ran laps and practiced their passing, dribbling and shooting. After practice, the other players left the pitch tired and thirsty, maybe a little hungry, but generally in sound condition. Warren left the pitch with blisters and rub burns that his teammates didn't have, nursing the effects of a new prosthetic leg. It may seem as if Warren struggles to play as well as his teammates, but Warren's love of sports and resilient spirit allow him to do just that.

This year, freshman Warren was one of the goalies on Blair's junior varsity boys' soccer team, but Warren does not only play soccer. He participates in football, rugby, basketball and baseball as well. Warren, with only one biological leg, is proficient in all of these sports, a feat any individual with two functioning legs would be hard pressed to accomplish.

Born in Cambodia, Warren had his left leg amputated at the age of three, after he was shot one night by unidentified assailants who later killed his mother, father, brother and two sisters. Warren's family owned a farm in a rural village called Preah Vihear and he suspects that the attackers were robbers who went to steal the family's possessions. Warren and another sister, Sokhoam, were the only survivors of the attack. 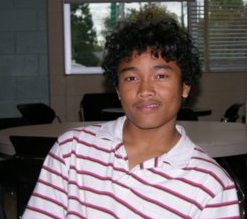 Photo: Samath Warren, a freshman, overcomes the drawbacks of a prosthetic leg.

Photo: Samath Warren, a freshman, overcomes the drawbacks of a prosthetic leg.

Before receiving his first prosthetic leg at the age of seven, Warren would hop to get around. He had crutches but he didn't like using them and preferred hopping. After attending the all-Cambodian Khmer School in Phnom Penh, Warren switched to Cambodia's International School of Phnom Penh and started playing soccer in the fourth grade. He competed in a soccer team that came in 2nd place in a regional sports tournament of the Mekong River International Sporting Association and also swam and played basketball, football and rugby. Warren and his sister became U.S. citizens in 2001 and moved to the U.S. two years ago with their American foster-father Larrie Warren, the Director for Post-Conflict Rehabilitation Programs for the Vietnam Veterans of America Foundation.

Warren has put the past behind him, but he often cannot prevent himself from being singled out for his, at times, blatantly obvious prosthetic leg. "It all happened a long time ago," he says. "I don't think about that stuff very much. I only sort of think about my leg whenever people stare or ask questions." Warren tells the story of a time when he was playing soccer with a loose leg and someone accidentally kicked it off. Warren acknowledges an upside to the incident, despite the embarrassment. "I was hopping around," he says. "That's when I learned I could still hop around without my fake leg."

Warren wore his first prosthetic leg at the age of seven back in Cambodia. He has broken or grown out of nine other legs since then. Warren wonders how he would survive without them. "The only way I can have full mobility is with a prosthetic leg," he says.

Warren joined the junior varsity boys' soccer team as a goalie but he says he might not try out again as a sophomore; he never had the opportunity to actually play in a game, and he eventually quit the team before the season ended. In soccer, Warren is at more of a disadvantage than in other sports. He is a strong kicker but his inflexible ankle prevents him from dribbling perfectly. The team's head coach Marc Grossman says he was dismayed when he heard that Warren had left, adding that he was a good player with quick reflexes and strength in the midfield. "It was unfortunate that he quit," says Grossman. "He definitely made the team; we cut five other people. We treated him like all the other freshmen." 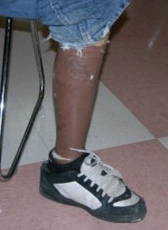 Photo: Warren's prosthetic leg still does not keep him away from sports.

Photo: Warren's prosthetic leg still does not keep him away from sports.

Of average height, slender and walking with a very subtle limp, Warren plans to try out for the baseball team in the spring and hopes to play for the football team next year. "I can run pretty fast," he says. "I'd like to play running back or wide receiver."

"He can do things anyone else can do"

Freshman Gillian McBride, a close friend of Warren's, was unaware that Warren wore a prosthetic leg for some time. Warren ran and played sports like soccer and football. "He would play as well as everybody else, if not better," she says. Warren gave so little indication of his condition to other people, even when a new or broken leg was giving him pain, that some people didn't even believe him when he confessed that he wore a prosthetic leg, she says. She also commends Warren's fortitude and positive attitude. "He's truly an amazing guy and great friend," she says.

Another friend of Warren's, Michael Slenkovich, agreed with McBride. "He's a great friend, he's amazing at sports, and he can do things that anyone else can do."

Warren, upbeat and grinning, does not view himself as handicapped and plans to keep playing the sports he loves. "I can play as well as everyone else, so I'd like to." Warren's uncommon courage in the face of his extraordinary story has helped him achieve the status he desires, that of an ordinary kid.