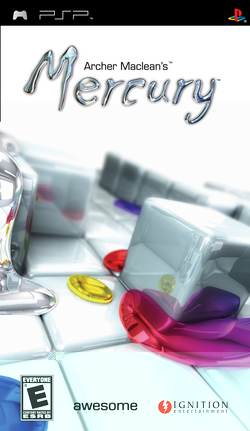 "Archer Maclean's Mercury" is innovative, but cannot compare to the PlayStation Portable's first puzzler, Ubi Soft's "Lumines." Had "Lumines" not been released, "Mercury" would be one of the best puzzle games in recent years, but it simply cannot reach the high standards "Lumines" set for the genre.

Viewed as a continuum, the puzzle genre has two distinct sides, with one side being about careful thinking and problem solving, and the other mainly a test of skills. "Lumines" would be towards the first end of the continuum, while "Mercury" would fall squarely at the second end. "Mercury" is all about skillful wielding of the analog nub, and is almost as different a game as possible from "Lumines" while still being a puzzler.

In "Mercury," the goal is to guide one or more blobs of liquid through an obstacle course, using the analog nub to "tilt" the level. That, along with controlling the camera, is really all there is to playing the game. Because of this, "Mercury" is very easy to pick up and play. However, after a few simple tutorial levels, the game becomes difficult pretty quickly, partly due to the complexity of the games levels. After the tutorial the hints at the start of the levels disappear, and figuring out what to do can become difficult. Your blob also acts like a liquid a bit too well, spilling over the edges frequently. These factors lead to one thing: frustration. I spent days trying to get past a single level, and this was on the second of the game's six main "worlds."

Each of these worlds is divided into 12 levels. The first nine are three each of race, percentage, and task courses. As you'd expect, the goal in race levels is to reach the end as quickly as possible, without taking the amount of mercury remaining into account. Percentage levels are the opposite, requiring careful manipulation of your blob to ensure a certain amount remains. The last type, task courses, involves manipulating the level to activate numerous beacons in order to win.

After those nine levels, there are two "combo levels" which combine two of the three aspects into one course. The final course in a world is a "boss level," which has all three objectives to complete. Beating the boss level unlocks the next world.

With six worlds (plus one bonus world) at 12 levels each, "Mercury" has a lot of game in it. When you factor in the number of repeats some levels take to beat, it'd be easy to spend several weeks on this title just on the one player game. "Mercury" also has ad hoc wireless play, meaning you can play with a friend nearby, but not over the web.

"Mercury" succeeds in presentation. The graphics are detailed and the animation is fluid. While there aren't many sound effects, you wouldn't expect that many from a puzzle game, so I have no complaints in that area.

Photo: Some of the later levels are nearly impossible.

Photo: Some of the later levels are nearly impossible.

Overall, "Archer Maclean's Mercury" is one of the most innovative puzzle games in a while. Unfortunately, its originality is hampered by the success of "Lumines" as well as "Mercury's" inane difficulty. Because of this, I can't recommend "Mercury" for anyone but a hardcore puzzle gamer, as the patience and skill required to beat a game like this are rare feats indeed.

Eric Hysen. Former SGA President Eric Hysen was a senior (really?) in the Magnet Program and is excited to begin his third year as a part of SCO's amazing team. While he would have loved to be able to be a full member of the SCO Senior … More »