"As I Am" aspires and nearly reaches

Without question, Alicia Keys is this generation's Whitney Houston. She has a powerful voice and has shown it, winning nine Grammys between her last two albums. Even though "As I Am," Keys' third album release, is much of an improvement over her previous releases, her voice is not yet perfect – the rhythmic patterns in her songs are not aggressive enough to accompany her powerful tone. 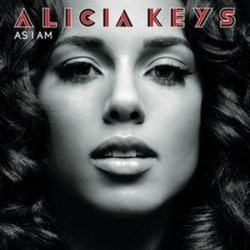 Photo: After a 2-year hiatus, Alicia Keys hits the charts again with "As I Am." Photo courtesy of J Records

Photo: After a 2-year hiatus, Alicia Keys hits the charts again with "As I Am." Photo courtesy of J Records

The long-awaited album, which follows a four-year hiatus, is better taken as a whole than her past albums. "As I Am" has songs of different styles, but does not contain hits comparable to "If I Ain't Got You," a glowing song that contains passion.

"As I Am" opens with a short piano introduction that leads into a rhythmic beat. Keys' unique style of piano playing is well intertwined into the beat, but without any vocals, the intro feels barren.

The next track, "Go Ahead," has a choppy beat that flows poorly with Keys' bright voice. Her lyrics are filled with attitude ("Broken promises/My heart you stole/Lies you told ") yet the beat breaks up the lyrics and leaves her thoughts fragmented. Such a beat would fit better in a rap song but in this R&B track, she is left sounding like a drone.

Keys slows the beat down with "Superwoman," a solemn display of pride. The rhythm in the background is far too plain and slow for Keys to showcase her true talent. She only gives a sample of her voice when she sings the chorus for the last time. Although her lyrics are positive and emotional, the track is dull because of its consistency.

Keys' "Like You'll Never See Me Again" further calms the pace of the album. The song is reminiscent of a lullaby, with a gentle xylophone playing in the background. For most of the track, Keys sings with a relaxed tone, but Keys voice sounds scratchy as she sings, "I don't wanna forget the present is a gift," which detracts from the quality of the ballad.

Keys progresses into more cheerful music with her next few tracks. "Wreckless Love," arguably one of her better tracks on the album expresses her powerful voice range with class. "The Thing About Love" and "I Need You" are also notable for their dutiful illustrations of Keys' talent. The background music behind these songs fit the R&B and soul styles more than most of the other tracks.

"Teenage Love Affair" carries an upbeat rhythm with sincere lyrics that suit R&B. Keys establishes the wide range of her voice, working well with the rhythmic music that accompanies her. Her lyrics ("Another secret meeting//on the fifth floor staircase//I'm gonna give you this letter//of all the things I can't say//want you to be my first, my last, my ending and beginning") are suggestive of a flirtatious relationship that ends in love.

Keys' final song, "Sure Looks Good to Me," is an interesting blend of soul and R&B, but still fails to create a lasting sound. Like some of her other tracks, the song is too predictable and feels ordinary.

Keys shows her growth as a singer in "As I Am," a sign that she has definitely improved since 2003. "As I Am," which Keys' began working on in 2005, feels a lot like a transitional album. In her next album, Keys will hopefully write more powerful songs and sing them with more spirit so she can evolve from a star to a legend.