The Maryland General Assembly met from Jan. 13 to April 12 this year to pass 810 bills and passed three particularly relevant to the Silver Spring community and students, concerning lowering the voter registration age, reducing gang activity and banning cell phone use while driving, all of which will take effect by July 1. 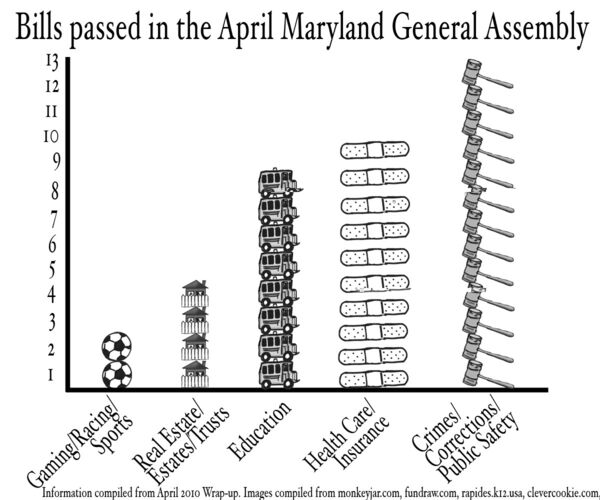 Photo:
According to Delegate Tom Hucker (D-Dist. 20), the General Assembly passed a tight budget this year and focused their attention on bills that would not require extra funding. "There was a resistance to every bill that cost any amount of money," Hucker said. "Bills that cost more than $100,000 had to be approved by the Speaker of the House before they got out of committee." However, Hucker also said that Maryland is still spending more on education than ever before and a record amount, $250 million, on school construction.

Senator Jamie Raskin (D-Dist. 20) introduced Senate Bill 292 in January, which he said lowers the voter registration age to 16, though the actual voting age will remain at 18. According to Raskin, he proposed this bill because often the process of registering to vote prevents people from voting, though he said that studies have shown more than 80 percent of voting age adults would vote if registered.
The bill, which will take effect June 1, will enable students to register before they leave high school, Raskin said. "Organizations like the League of Women Voters will be able to register juniors, seniors and even some sophomores," he said. "The goal is 100 percent [registration]."

Both houses also passed House Bill 934 that bans the use of handheld cell phones while driving, though it will permit hands-free headset use, according to Raskin. He also said the bill classifies talking on a cell phone as a secondary offense, meaning the driver can only be ticketed if he/she were pulled over for something else. "You can use cell phones in your cars but you have to use a hands-free device," Raskin said. "You can only be charged with it for another offense, like speeding or driving recklessly." The ban follows the state's restriction of texting and reading texts while driving that passed earlier this year.

The Safe Schools Act, sponsored by, among others, Speaker of the House Michael Busch (D-Dist. 30), includes a number of provisions that will increase communication between the police and teachers in regards to potential gang members and activities.
According to Busch, he developed the bill in coalition with stakeholders such as state police and the Governor's Office, after an incident in the past year. "After the tragic death of 14-year-old Christopher Jones in Anne Arundel County last year, it came to my attention that schools and law enforcement personnel were not able to share critical information about possible gang activity and gang recruitment efforts within Maryland schools," Busch said.

The bill expands the number of crimes that the police must report to a school about a particular student, to include more minor offenses, according to Busch's office. In addition, the bill would require one security officer at each middle and high school to hold regular meetings with the administration, community leaders, law enforcement and other stakeholders.

Raskin said he supported this bill because it is the one of the most effective ways to prevent gang activity. "I strongly support this legislation because I'm convinced that it is important to communicate between police departments and schools so that gang problems can be caught early and start intervention," Raskin said. The Safe Schools Act passed both houses of the General Assembly and will now move to Governor Martin O'Malley for his signature.

Plans for the future

Senate Bill 627, which would have allowed medical marijuana for certain patients, passed the Senate but not the House, according to Raskin, who co-sponsored it with Senator David Brinkley (R-Dist. 4), a two-time cancer survivor.

Raskin said that the bill was viewed as one of the most comprehensive plans for licensing and regulating the sellers and buyers of medical marijuana, holding them to tight standards in terms of identification and certification. Although the bill passed 35-12 in the Senate, Raskin said the House hesitated and so the bill will have to be postponed. "The common wisdom for members of the House is don't touch a medical marijuana bill in an election year," he said. Raskin said that until the bill is passed, those in pain cannot get the relief they need. "We are forcing very sick people to buy drugs from criminals," he said.

A bill that would have expanded Student Member of the Board (SMOB) voting rights to personnel matters (hiring and firing) did not pass in the Senate. Hucker, who co-sponsored the bill, is hopeful that it will pass later on. "Students should really be encouraged to be active in school administrative work and all kinds of activism," Hucker said.