Economy, energy, education: What it all means to the next potential president

This is not original reporting. All information has been compiled from the campaign web sites for Senator Barack Obama (D-Ill.), Senator John McCain (R-Ariz.) and other official campaign web sites. Silver Chips Online posts this news summary to provide readers with a forum for discussion. 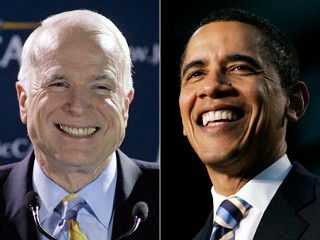 McCain:
Economy
McCain looks to improve the nation's economy by cutting taxes and offering immediate economic relief for American families. McCain plans to keep the top tax rate at no higher than 35 percent and cut tax rates on corporate businesses by 10 percent in order to keep jobs in the United States. He is focused on promoting small business growth and cutting taxes for people like "Joe the plumber." McCain supports the $700 billion bailout plan with hopes to resuscitate the nation's economy.

Foreign policy
McCain's foreign policy is best described by his dedication to national security. A Vietnam War veteran, he believes that global issues should be tackled with strong political action. He wants to put pressure on nations that pose security threats to America. In a March speech, McCain stated the need for a "League of Democracies" to pursue any foreign conflicts. A main factor in his foreign policy decisions is his past - he looks to increase the size of the U.S. military to provide more support for the troops. He also stresses the prevention of Iranian and Syrian intervention in the war against terror.

Photo:
Energy/environment
McCain aims to promote energy independence and the production of more power. He believes in expanding domestic oil and natural gas production by drawing upon America's reserves of natural gas in the Outer Continental Shelf. Also, McCain wants to reform the transportation sector by promoting energy efficiency, which involves selling cars that emit no carbon, improving hybrid battery technology and creating more Flex-Fuel Vehicles. Under his plan, he will invest in clean, alternative sources of technology by making the U.S. a leader in green jobs and technology and adding 45 new nuclear power plants by 2030. Regarding climate change, McCain would like to use a cap-and-trade system of finding alternatives to carbon-based fuels. He would send the extra money to corporate planners, entrepreneurs and environmentalists. McCain will also address the speculative pricing of oil.

Immigration
McCain plans to ensure border safety as domestic security is one of his top priorities. He plans to do this by mandating border states to utilize certain security features, such as unmanned border patrol vehicles. The second part of McCain's immigration plan involves creating temporary worker programs for both highly skilled and non-skilled workers while still promoting jobs for citizens. McCain will also address the problem of undocumented immigrants living in the United States by forcing them to either leave or follow the path to legal residency. McCain guarantees that "no person here illegally [will receive] a green card before those that have been legally waiting outside the country," according to his campaign web site.

Education
McCain believes in the importance of fostering excellence and competition, supporting equal opportunity and access to excellent education. McCain promotes a parent's choice in a student's school instead of one that does not work or is unsafe. McCain also believes that parents should receive financial support when moving away from a failing school. He supports No Child Left Behind in its focus on stressing the education gap that is prevalent among students in the nation. McCain believes that No Child Left Behind is a driving force in improving education.

Obama:
Economy
Obama plans to revamp the economy by repealing the existing tax scheme through cutting taxes for working families and imposing higher taxes on large companies. Obama will remove all capital gains taxes on small businesses and will offer a $500 tax credit to most workers. Although initially calling the bailout plan "a price tag, not a plan," Obama supports the $700 billion financial bailout. In order to keep jobs in the states, Obama collaborated to introduce the Patriot Employer Act of 2007, which rewards companies for not outsourcing jobs.

Foreign policy
As a member of the Senate Foreign Relations Committee, Obama seeks to improve the way foreign nations view America and its people. Being against the war in Iraq from the start, he seeks to find a timely solution to a situation that he believes should not have existed in the first place. Obama asserts that all non-military actions to prevent a conflict must be taken before military force is used. He has stressed the need for discussion between leaders, as he believes that communication will bring global solutions that would otherwise be impossible. Obama also plans to stop the genocide in Darfur using strong political pressure.

Energy/environment
Obama primarily plans to make America an energy efficient and environmentally friendly country. Under his plan, Obama would create five million new jobs, reduce electricity demand and weatherize one million low income homes. Also, as a supporter of Clean Coal technology, he would develop five coal-fired plants that will capture clean carbon. To lessen America's foreign dependence on oil, Obama wants to eliminate foreign oil imports from Venezuela and the Middle East within the next 10 years. He would also like to provide Americans short-term relief from high gasoline processes and reduce 80 percent of greenhouse gas emissions by 2050.

Immigration
Obama wants to improve the integrity of American borders by increasing border personnel and security at the nation's seaports. He also plans to crack down on companies that employ illegal immigrants and acknowledges that part of solving the problem of immigration is improving Mexico's economy. However, Obama wants to "bring people out of the shadows" by offering undocumented immigrants who live stable lives in the United States the opportunity to go through the naturalization process to become a citizen. Obama collaborated on the Citizenship Promotion Act, which, if passed, would ensure that naturalization fees are kept reasonable and would allow FBI background searches to be done quickly and more accurately.

Education
Obama wishes to reform No Child Left Behind, recruit and retain prepared teachers and make college more affordable to all Americans. Obama believes that No Child Left Behind's shortcomings are an inadequate assessment of students' progress and do not properly support schools that need improvement; as president, he plans to address these problems. In addition to the issue of No Child Left Behind, Obama will focus on public education by trying to make math and science a national priority and better prepare students for college. Under his education plan, Obama also would cover early childhood education by implementing his "Zero to Five" plan that will help prepare young children for kindergarten and decrease the costs of "high-quality" childcare.