Where only first names appear, names have been altered to protect the identity of the source.

"If I could be straight," sophomore Candace stops for a moment and thinks. She is looking down at the bright red lunch table as if the answer lies somewhere beneath the caged metal. Her face is a placid mask, the only expression coming from her gently furrowed eyebrows. She is processing the magnitude of this choice she knows she'll never be able to make. "If I could be straight," she repeats quietly. Her brown hands are folded carefully in her lap, her dark, shiny hair tucked behind one ear. She's been speaking for ten minutes and everything she's said so far has been tinged with a hint of fear. She's trying to focus, but every chance at distraction, from the friends running rowdily around her or the obnoxious boys playing a few yards from her table, is taken. After a few long seconds of silence, her brow unfurrows and she opens her mouth. She's chosen an answer. 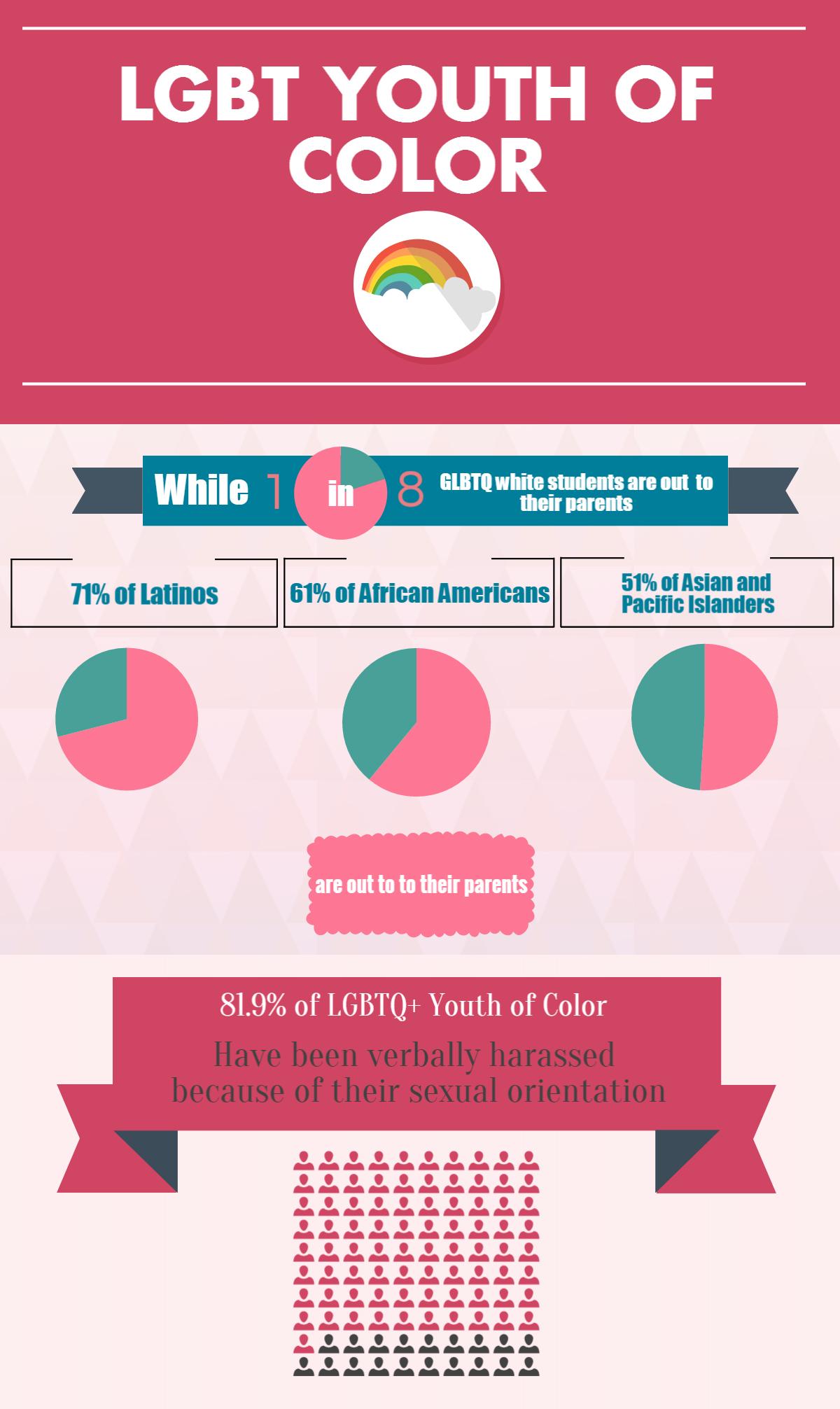 Facing intolerance at a curious intersection

Candace's fear is understandable. As the bisexual child of "very traditional" Bangladeshi immigrants, she understands that there is a part of herself that she can never share with her family. "I can't really come out to my family," she says matter-of-factly. "They don't really recognize anything that's not straight. They just don't understand."

Her situation is somewhat similar to that of senior Robin. Robin, who is black, identifies as gender neutral. Robin, whose preferred pronouns are they and them, does not identify as either male or female, in part because of the societal expectations that accompany the gender binary. "I think there's a certain conception of what it means to be a girl and what it means to be a boy," Robin says. "I don't really personally align myself with either camp."

Like Candace, Robin fears coming out because of the way people might react. "I feel like people just don't even think it's real," Robin says. That same fear extends to coming out to their mother. "I think she wouldn't understand it. I think it would just make her sad and confused. I don't know if she's open to learning about it and like changing her opinions on gender."

Junior Isaac Bonilla, a gay Latino, finds the lack of respect people have for the LGBTQ+ community to be frustrating. "The LGBT community as a whole is disrespected by people who aren't in it." He experienced this disrespect firsthand when he lost friends after coming out. "I basically felt like my preferences mattered more than our friendship," Bonilla says exasperatedly.

As LGBTQ+ youth of color, Bonilla, Candace and Robin exist at a curious intersection of two communities that don't seem to fully accept or understand them. There can be a lot of shame and pain involved with their converging identities. LGBTQ+ youth of color can be subject to a host of different oppressions, including racism, sexism and heterosexism and heteronormativity.

According to a 2013 study conducted by the Movement Advancement Project, LGBTQ+ youth of color are one of the most at-risk minority groups in the country. They are at a significantly higher risk of becoming homeless, falling into poverty and facing job discrimination. "In the black community there's already a lot of stigma around LGBTQ problems and then in the LGBTQ community, it's not always inclusive. Gay men sort of drive the conversation in that world and I feel like intersectionality is not very much appreciated," Robin says.

Despite the challenges they may have to face later in life, queer youth of color generally develop their sexual and gender identities around the same time as their white counterparts. However, junior and co-president of Blair's Gender and Sexuality Advocacy club (GSA) Niarah Jackson, who is black and pansexual discovered her queer identity slightly before the average age of 16. Pansexuality is generally defined as being attracted to people regardless of their biological sex or gender identity. When she was in middle school, Jackson started to have feelings for one of her friends. "I was in seventh grade and there was this girl. I just started to feel different emotions that I didn't feel before," Jackson says. The realization that her sexual identity might be different was startling to Jackson. "I kind of felt like I didn't know what was going on with myself," she reveals. But after some time spent looking up sexual identities online, Jackson was able to find one that helped her to understand her newfound feelings. "I had to go into a lot of research and details to figure out what was going on with me. As I explored myself and identifications, pansexual was what fit me the best." 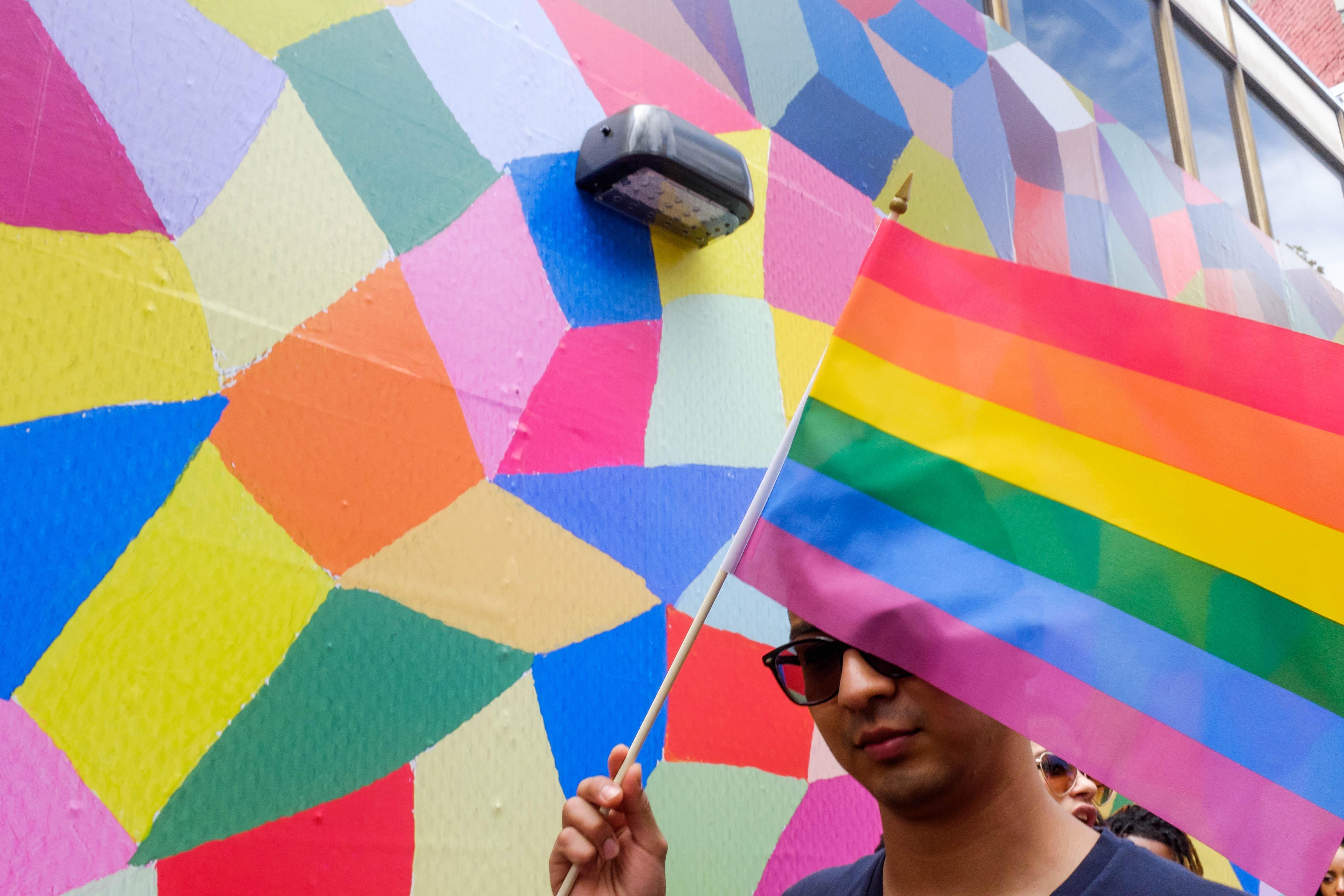 Photo: A person of color at the San Francisco Pride Parade.

Photo: A person of color at the San Francisco Pride Parade.

Candace first discovered her bisexuality in a fairly similar manner to Jackson. Like Jackson, Candace met a girl who set her heart aflutter. It happened in her freshman year in a fairly innocuous place: one of her brother's work functions. "The first time I saw her I actually thought she was a boy and I was like 'oh he's cute,'" Candace laughs. "But once I actually got closer to her I realized that she was a girl. Somehow I still had the feelings that I would have for a boy I liked."

Robin's journey to self-discovery diverges from the other two mostly in that it's been a much longer and continuous process. Like a lot of queer people, Robin was aware of their queerness from a young age. "I just always felt like I was different in some way. I never really felt like I identified as a girl. I realized that I was queer in some way before I realized in what way." The answer to the question of exactly what way they were queer began forming when Robin experienced a bout of gender dysphoria in the tenth grade. Alone in their room at night, they were on what seemed to be their hundredth viewing of a YouTube cover of a song that they were really into. It was on this viewing that Robin had a startling realization. "He was shirtless and singing and I was like 'Wow he has such a nice body.' Except instead of me being attracted to him, I wished I had his body," they say. 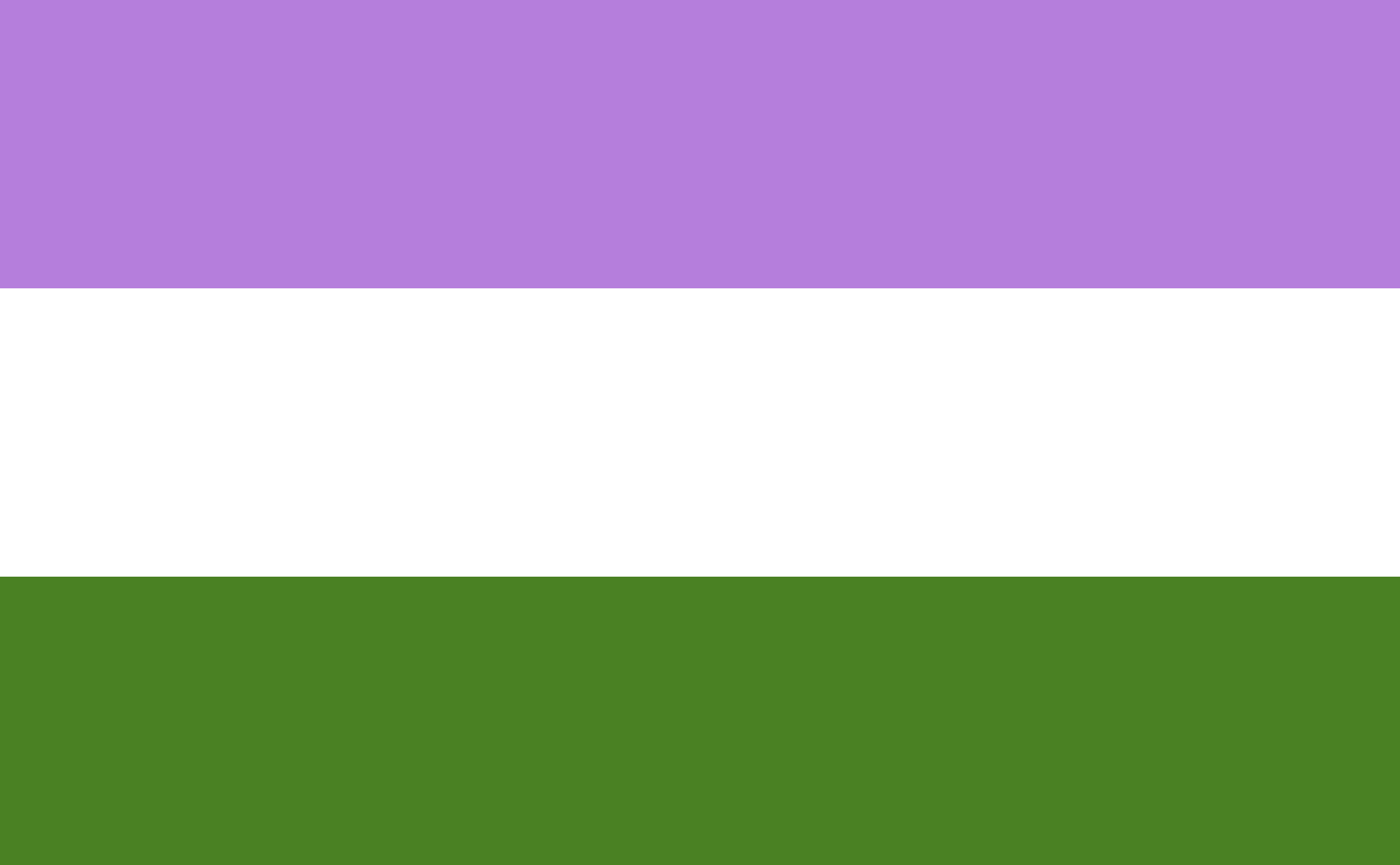 Photo: The flag used by the genderqueer community which Robin belongs to.

Photo: The flag used by the genderqueer community which Robin belongs to.

The feeling was by no means new. "It was something that I'd thought about for many years before I even knew what being gender neutral was," they explain. However, the situation was still disquieting for them. "It was concerning. I kind of panicked I think… I was like, what does this mean, I literally wish that I looked like this guy, this is so strange," they recollect.

Despite the challenges of being a young LGBTQ+ person of color, there can be a lot to love about having intersecting identities. Jackson for example, loves how being pansexual and black opens her up. "I think it opens me up to a lot of other issues I can work on because I can understand a bunch of different minority perspectives. It changes how I can look at the world," she says. 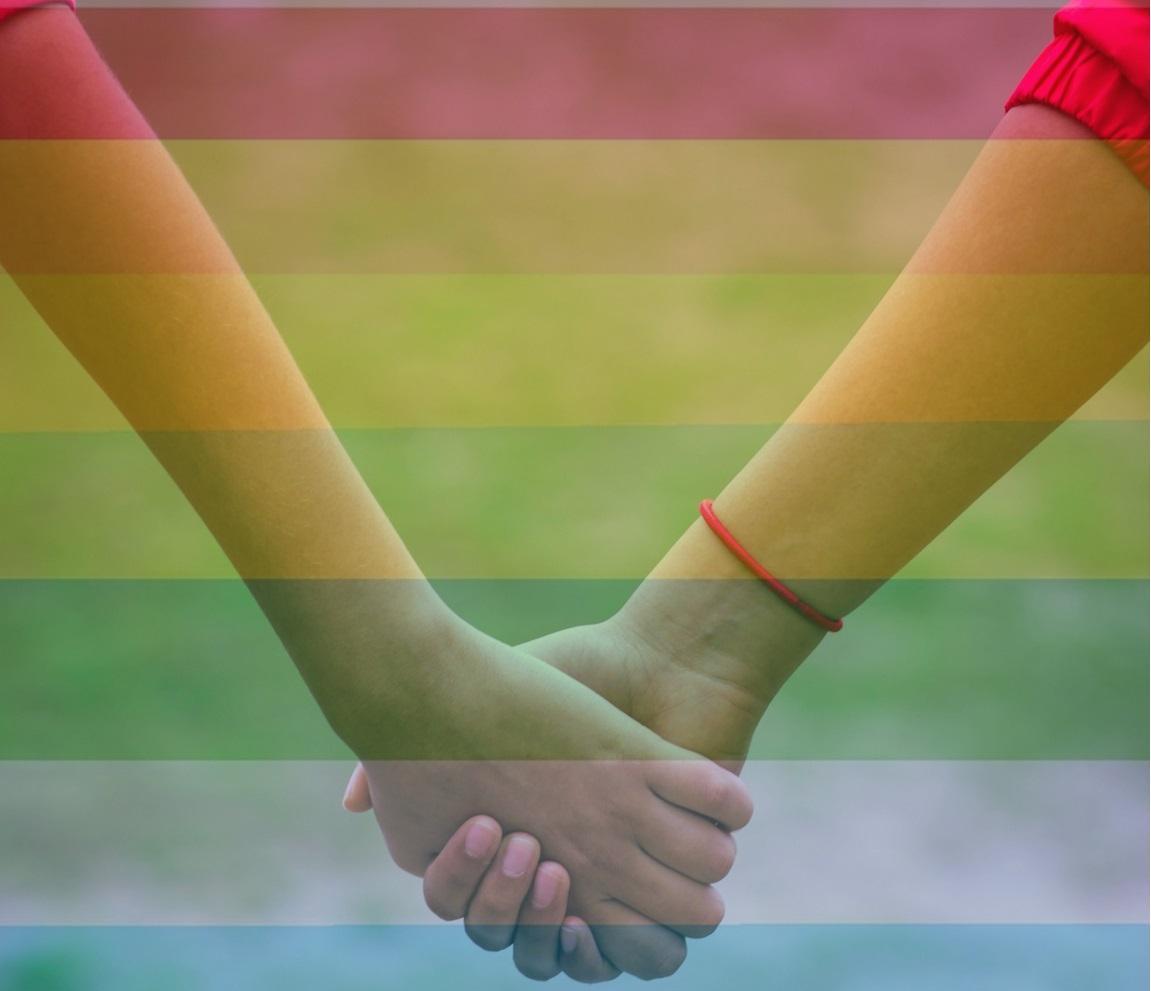 Photo: LGBTQ+ youth of color are at a curious intersection of identities.

Photo: LGBTQ+ youth of color are at a curious intersection of identities.

Bonilla likes that being a gay Latino makes him unique. "For me being straight would be kind of boring. There's nothing special about me. Being gay it's like, 'Oh hey, by the way, I'm also gay,'" he says with a smile.

Candace has had a lot of trouble reconciling her bisexuality with her family's Hindu faith. "I had two weak spots had when I went to temple with my parents. When I went to temple, I just felt like an abomination," she recalls dejectedly. While Hinduism doesn't directly condemn homosexuality, Candace still felt like she was disappointing the religious people in life by being bisexual. "It felt like if so many people believe in not having one man loving another man or a woman love another woman and I broke that code, then I broke their beliefs. I just felt really bad even though I knew I couldn't control it."

But she has grown a lot from the way she felt when she first realized her queer identity. Now, even though she hesitates when asked if she would choose to be straight, she knows that she wouldn't.
Candace is on a journey to find within herself something that so many LGBTQ+ teens who have struggled with their identities also search for: acceptance.