Athlete of the Week: Cross Country

As Jenny Sholar rounds the curve, the finish line is in sight. With a kick of adrenaline, she closes in on the solo runner in front of her and narrows the distance between them. With a final burst of energy, she pushes past her opponent and races across the finish line, ending with a thrilling sense of satisfaction.

This is the moment Sholar craves. She loves the invigorating feeling. 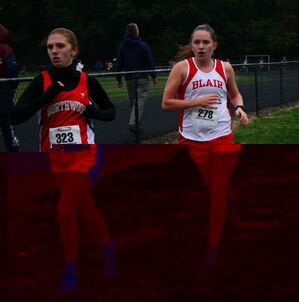 Sholar ran cross country for the first time in 8th grade on her middle school's team. Though she did not originally intend to continue running in high school, she was encouraged by a friend to try out. Eventually, she became wrapped up in it. "Freshman year, I discovered that I really enjoyed being on the team," she says.

Over the years, co-coaches James Demma and Eric Prange watched as Sholar's running attitude changed. "We've seen her transition from just having fun running to being more competitive," Prange says. Sholar also recognized this personal change. "I wasn't so serious about it at first. I think I just enjoyed being on the team," she admits.

As her sophomore year cross country season came to a close, Sholar began to think more seriously about the sport. "It was near the end of the season, when I'd been performing better, when I thought to myself, 'I can actually be good at this, if I work hard'," she remembers.

In the time between the 2008 and 2009 cross country seasons, Sholar ran outdoor track and worked out almost everyday during the summer to improve. Sholar bettered her skills significantly at a summer cross country camp for Montgomery County runners, where she was able to challenge herself against a wide range of people. "It was a really good experience because I was able to run with some of the top runners in the county," she says.

Sholar has been the top runner for the Blair girls throughout the entire season, according to Prange. "Jenny's always been on varsity, but she's never before been our number one runner," he says. This year, Sholar has been able to cut off approximately two minutes of her time.

Before every race, Sholar concentrates on getting herself energized and confident. "Running is such a mental sport, it's all about getting pumped," she says. Sholar uses visualization techniques to help prepare. "Either the night before or on the way to the race, I like to imagine seeing myself run through the course," she says.

Despite her success, Sholar has had her fair share of difficulties. Last year, she suffered hip problems that prevented her from racing. Sholar also occasionally experiences lags in motivation, but she says she has been able to overcome these obstacles with the help of her coaches.

The team spirit and close-knit feel of cross country also boosts Sholar's motivation. "There's a really great dynamic with Blair's team that you don't see in other schools," she says. "We cheer for each other a lot, and we go all out with spirit."

Sholar's teammates and coaches see her as a great team leader. "She always tries to make sure everyone is doing what they're supposed to," says sophomore Kidist Bekele. "But at the same time she's always fair and kind." Prange also recognizes Sholar's contributions to the team beyond her race times. "She spent a lot of time this year getting t-shirts and sweatshirts for the team, and she definitely helps a lot through organization skills," he says.

With high expectations from others and high ambitions for herself, Sholar hopes to qualify for the state championships next year and lead the entire girls' team to the state competition. With this goal in mind, Sholar does not anticipate ending her running career anytime soon. "The sport in itself is just so inspiring, it makes me want to keep pushing myself further," she says.

While cross country does not require a ball, helmet or stick, sophomore Conor Donahue is still heavily equipped at every race – with the passion for running and the will to win.

The star athlete is only in his second year on the team, but Donahue is Blair's number one runner. He has finished among the top seven all season, and has consistently posted formidable times. Donahue has dropped over three and a half minutes in his racing time since the first race of the season. 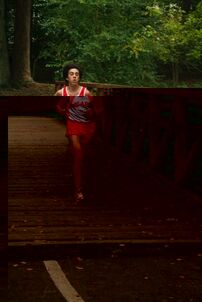 Photo: Sophomore Conor Donahue stands out as a notable runner in every cross country race.

Photo: Sophomore Conor Donahue stands out as a notable runner in every cross country race.

Donahue's performance this year was a welcome surprise to co-coaches James Demma and Eric Prange. "He improved tremendously from last year," Prange says. "He started off this season already much stronger, and he's still getting better every week." Co-captain Peter Leonard agreed, praising Donahue for his unexpected turnaround. "We never saw him coming," Leonard says.

Not only has Donahue ranked highly in competitive races, but running has held personal significance for the athlete beyond his race victories. The sport has been a rewarding part of his life since childhood. "My dad has always been a runner so he kind of got me into it when I was young," Donahue says. Since then, running has become a valuable bonding experience for the Donahue family. "My little brother also runs in races," Donahue says with pride, "and sometimes me and my dad will run alongside him." Donahue also sees cross country as a means of relief from other stress in his life. "I have [Attention Deficit Disorder] (ADD), so it's often hard to focus in school," Donahue explains. "I guess you can say running is sort of an escape."

Besides encouragement from his family, Donahue attributes much of his success to his teammates. "I love the Blair cross country team…we're really close," he says. Donahue especially admires upperclassmen, such as junior Connor Dowd, who provide inspiration. "Connor is actually one of my idols," Donahue admits.

Coaches and teammates note Donahue's positive attitude as something that makes him unique both in and out of the cross country environment. "He shows a genuine love for running," Prange says. Sophomore Kenyan Fitzpatrick also recognizes Donahue's excitement. "He's enthusiastic about everything he does," he says.

With such talent, Donahue sometimes feels pressure from his coaches and teammates because of their high expectations for him. "It's really nerve-racking," he admits. But Donahue believes that balancing cross country with his other activities helps him maintain composure. "I'm really involved in theater, and I play bass in a band," he explains. "Basically they can all provide an escape route for each other."

Demma believes that Donahue can lead the boys to an undefeated season next year. Donahue is equally intent on improving the team and his personal record. "I hope next year we get a lot of new runners so I can help encourage them," he says. "I also want to improve myself – my main motto is I can never do something halfway, I've got to do it all."

Ultimately, Donahue will be happy as long as he can continue to pursue his passion. "I'd like to, no matter what, keep running," he says.