Athlete of the Week: Swim and Dive, Nate Hukill

Senior Nate Hukill stands on poolside bleachers in front of a mob of Blazers sporting sleek Blair swimsuits. With his arms in the air, Hukill shouts, "You wish you were a Blazer! Ooh ahh!" His voice booms with a chorus of 50 swimmers, the cheer echoing throughout the indoor pool. A minute later he crouches on the edge of a platform, ready to dive into the water. 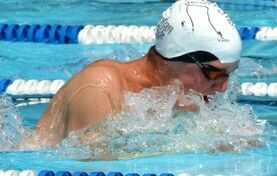 Although Hukill loves being a part of Blair's swim and dive team, his swimming interest peaked long before he joined the Blazers. At age seven, Hukill became a member of the summer swim team at his local pool. About four years later, with increased dedication to the sport, Hukill began swimming year-round to improve his speed. As a part of his natural progression towards more advanced swimming, Hukill tried out for the Blair swim team freshman year, which sparked a four-year dedication to Blair swim and dive.

Hukill's competitiveness first drew him to the sport. "I love racing…just going really fast," he says. As captain, Hukill's need for speed has earned him impressive times. During the most recent swim and dive Division II Relay Carnival, he anchored a winning Men's 200-yard Fly relay race. "Nate has had breakthrough [times] this year," Blair swim and dive coach David Swaney says. "He just keeps getting faster and faster."

In addition to Hukill's speed, Swaney chose him as a captain for the 2009-2010 season because of his leadership skills and eagerness to represent Blair. "The combination of leadership, spirit and speed makes Nate a good captain," Swaney remarks. Hukill's fellow captain, junior Laura McGehee, agrees that Hukill's blend of passion and talent makes him stand out. "He leads us in cheers and is also able to lead a team to victory," she says.

Sophomore swimmer Hadley Luker notes that Hukill's encouragement and approachability define his notable leadership. "As a captain, he motivates me. He's really good at talking to people and making you feel comfortable on the team, which helps us swim our best," she says. McGehee adds that part of Hukill's ability to make others feel comfortable comes from his fun-loving personality. "In practice, even when we're doing hard stuff, he likes to have fun and joke around," she says. "That just makes everything a lot easier."

Hukill's favorite aspect of swim team is that camaraderie among swimmers, but he recognizes that he also needs to work hard to continue Blair's winning legacy. "The guys' team has been undefeated for the past five seasons and I want to help continue that," he says. Although Hukill has winning goals for his last season at Blair, he wants more than just victory-minded swimmers. "I definitely want the Blair team to be focused on winning, but I also want them to be spirited and have as much fun as possible," he says.