Athletes should continue to advocate for social issues in America

Many athletes have responded to the killing of George Floyd by voicing their opinions on social media or even taking to the streets themselves.

The murder of George Floyd has sparked outrage and chaos across the country, with protests on the streets of almost every U.S. city. Many athletes have responded to the killing of George Floyd by voicing their opinions on social media or even taking to the streets themselves.

However, this is not the first time athletes have spoken up about social issues in America. One of the earliest known instances of an athlete speaking up about a social issue in the United States was during a baseball game in 1883, when the Toledo Blue Stockings started Moses Fleetwood Walker, an African American player who was not initially going to play. This was a stance against racism after the other team refused to play the game because he was a person of color. Since then, athletes from Jackie Robinson to Colin Kaepernick have spoken up against social issues, namely racism. 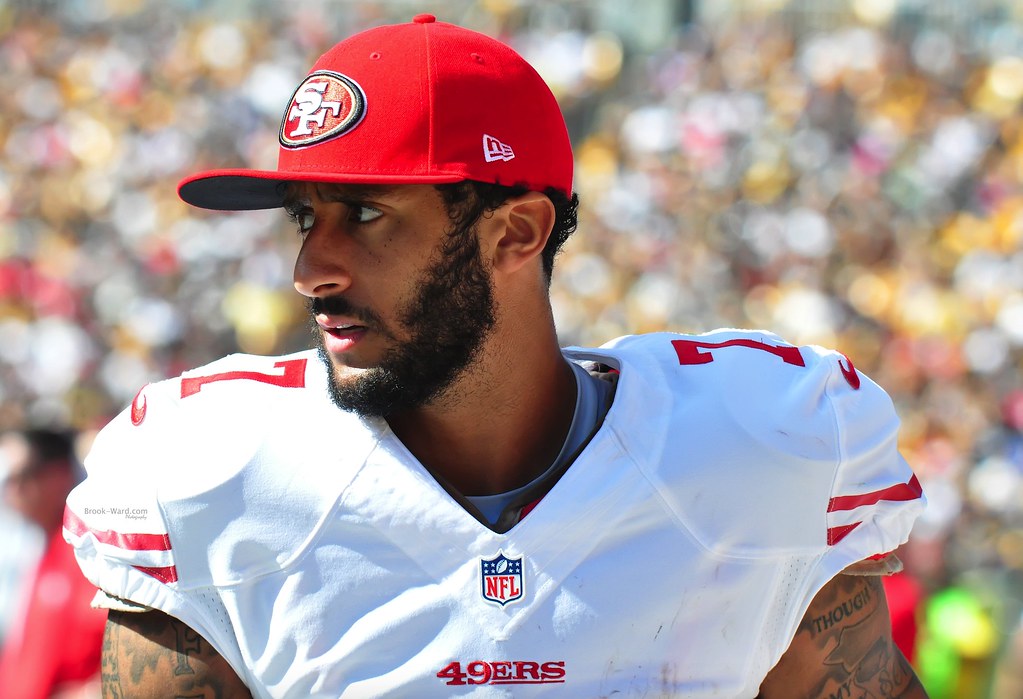 Photo: NFL player Colin Kaepernick was among the first to take a knee during the National Anthem (courtesy of Brook-Ward via Creative Commons)

Photo: NFL player Colin Kaepernick was among the first to take a knee during the National Anthem (courtesy of Brook-Ward via Creative Commons)

Speaking up about social issues has never been easy for athletes. Jackie Robinson reluctantly joined the MLB in 1947 to break the color barrier in professional sports. Robinson knew it would not be easy, and was belittled and discriminated against because of his skin color from the second he stepped into the Brooklyn Dodgers’ locker room. In Robinson’s tenure on the team, one of his teammates started a petition to remove him. It was unsuccessful. In 1968, track stars Tommie Smith and John Carlos raised fists to draw attention to the way African Americans were being treated. Smith and Carlos were reluctant to raise their fists, and faced backlash after going through with the gesture on the podium. Basketball superstar Lebron James, who has never been shy about voicing his opinions, was told to “shut up and dribble” by Fox News pundit Laura Ingraham after he criticized Donald Trump in a 2018 interview with ESPN.

Despite the difficulties and criticism that comes with speaking up about a social issue, the good it accomplishes outweighs the negative consequences of speaking up. It spreads awareness about the issue. More people felt inspired to challenge the social norms of segregation in 1947 when Jackie Robinson finally broke the color barrier in the MLB. More African American baseball players began to join Jackie Robinson in the MLB, which slowly but surely began to send an anti-segregation message to the rest of America as the most popular sport at the time. Mohammed Ali declined to serve in the Vietnam War and faced a prison sentence as a result, which he successfully appealed. Even though Robinson and Ali had difficult times playing sports, their sacrifices and resilience paid off in the future. Segregation laws no longer exist, and today there are plenty of professional African American athletes.

Professional athletes have a big platform in today’s society, thanks to social media and the press. When many NFL players took a knee during the national anthem to protest police brutality, the American public knew almost instantly. The players’ actions helped to expand national conversations about police brutality. Players in other leagues began to do the same thing when the national anthem was played. More people are aware of this issue as a result, and pressure is being put on politicians and police officers alike to treat people more equally.

Many people do not want athletes to use their platforms to speak up against social issues because they want sports and politics to stay separated. Anyone who believes this should put themselves in the shoes of any NFL player that has decided to take a knee in the past or has decided to do so this upcoming season in response to the George Floyd murder. The point of a protest is to point as much attention as possible towards an issue, and a sporting event is the biggest setting for athletes to do that. Athletes are tired of seeing people of the same skin color as them, or that of their teammates, oppressed.

Since racism is still an issue in sports, athletes are still speaking out against it. A noose was discovered in NASCAR driver Bubba Wallace’s garage last month. To stand against the actions, every driver in his next race pushed his car around the race track to show solidarity. In the English Premier League, players wear arm patches that say “Black Lives Matter” in response to the events that have taken place recently.

Athletes have a right to voice their opinions, and they should continue to do so. By using their platforms to their advantage, they spread awareness on social issues and speak up for others who do not have a voice. More people feel empowered to make a change, and that has happened many times in the past and will continue to happen in the future as long as athletes use their power in a positive way.