Sports fans are familiar with the negative stigmas about the private lives of professional athletes. Many a Ravens fan recalls the suspension of Ray Rice, Eagles supporters still miss the electrifying speed of Michael Vick, and Redskins fans everywhere bemoan the scandal surrounding their team's name. This begs the question: what should fans do if they own an out-of-favor jersey?

According to some sports enthusiasts, it isn't taboo to go on wearing a politically incorrect jersey. By wearing a player's jersey, a fan isn't condoning the things that go on in his personal life, only the things he does on the field. Washington sports fans are especially familiar with the issue of political correctness in sports, given the controversy about the names of several D.C. team names in the past. 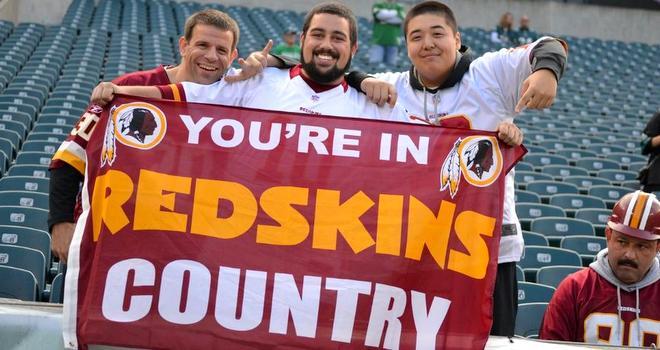 Photo: Redskins fans are familiar with the politically-incorrect argument.

Photo: Redskins fans are familiar with the politically-incorrect argument.

The Washington Redskins and owner Daniel Snyder have come under fire of late because of the racially insensitive nature of the team's mascot. The movement to change the name has slowed down somewhat due to a poll in the Washington Post which claimed that 90 percent of American Indians aren't offended by the team's name.

According to sophomore Michael Damtew, there's too much unnecessary talk about the Washington football team's name. "I mean, I get that it's not cool to use that word, and I think it would be right to change it, but it's also not that big a deal," Damtew says. "Also, other teams in other leagues have names like that, like the Braves and the Chiefs, and you don't hear nearly as much about them."

The Washington, D.C. has already known controversy over team names. The Washington Wizards were historically known as the Washington Bullets. The team elected to go with a new name in 1997 because of claims that the "Bullets" perpetrated the negative stereotype that the city was fraught with gun violence. Guns came into play yet again when, in 2009, Wizards star Gilbert Arenas and teammate Javaris Crittenton brought loaded firearms into the locker room during a conflict over gambling dues. This incident further marred the team's public image.

In regards to the Redskins debacle, there are numerous NFL fans who wear Redskins gear without any spite towards the American Indian community. However, some players and analysts have refused to use the name, instead referring to them as "the Washington football team." For some fans, wearing gear or showing support for the team doesn't necessarily show support for the name, and everybody has an opinion on whether or not the two are mutually exclusive. 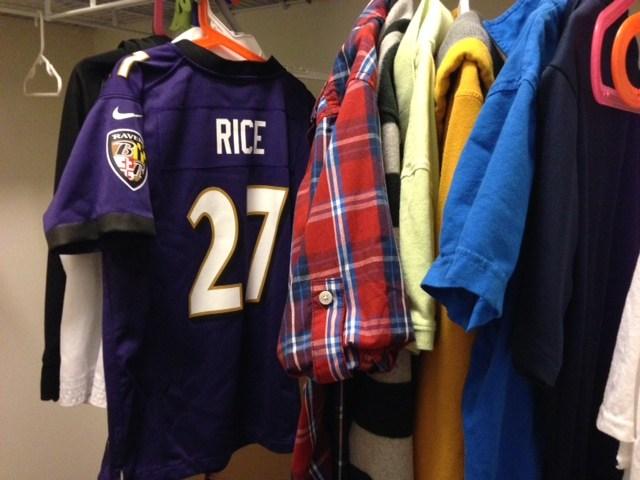 Photo: Ravens fans still don't know what to do with Ray Rice jerseys.

Photo: Ravens fans still don't know what to do with Ray Rice jerseys.

According to senior Lailah Lindsey, while there is a problem with the team name that shouldn't keep people from wearing Redskins jerseys. "It's okay to wear the jersey as long as it's still the team's name, but I feel like they should change it because it's clearly offensive," says Lindsey. Many Blazers share her sentiments; Redskins paraphernalia can be seen left and right throughout Blair's halls.

This issue extends beyond team names. Individual players who have run into trouble with the law, like former Baltimore Ravens runningback Ray Rice (convicted of domestic abuse in 2014) or former Philadelphia Eagles and Atlanta Falcons quarterback Michael Vick (convicted of cruelty to animals in 2007), face the same issues when trying to drum up fan support. Local thrift stores are full of Rice and Vick jerseys, as sports fans don't want to be seen as supporting their criminal endeavors.

Is it okay to keep wearing the jersey? According to sophomore Harris Edenbaum, selling it is the right move. "I think you can definitely sell it, but maybe not wear it," explains Edenbaum. "You could try and take the name off, but then I guess the number would still be there." Other Blazers have different opinions. Sports paraphernalia doesn't come cheap, and according to senior Sebastian Sartor, it'd probably be okay to go on wearing the player's name on your back. "You're supporting the player he was on the field, not the man he was off of it," Sartor says.

The NBA and NFL are very familiar with the phenomenon of fans taking out their feelings for players on the jerseys which bear their names. After former Cleveland Cavalier Lebron James snubbed his hometown by signing with the Miami Heat, Cavs fans burned his jersey in the streets. Cleveland fans also burned Browns jerseys and destroyed sections of the football stadium after the team moved to Baltimore and became the Colts. These extreme reactions might be more emblematic of Cleveland's athletic frustration than the nation as a whole.

More recently, Kansas City Chiefs wide receiver and return specialist Tyreek Hill has entered the national spotlight due to his stellar play in the final weeks of the NFL season. His jersey is steadily becoming more popular as he gains notoriety, but what people forget is that he was convicted of domestic abuse after, in 2014, he strangled his pregnant wife and punched her multiple times in the stomach. 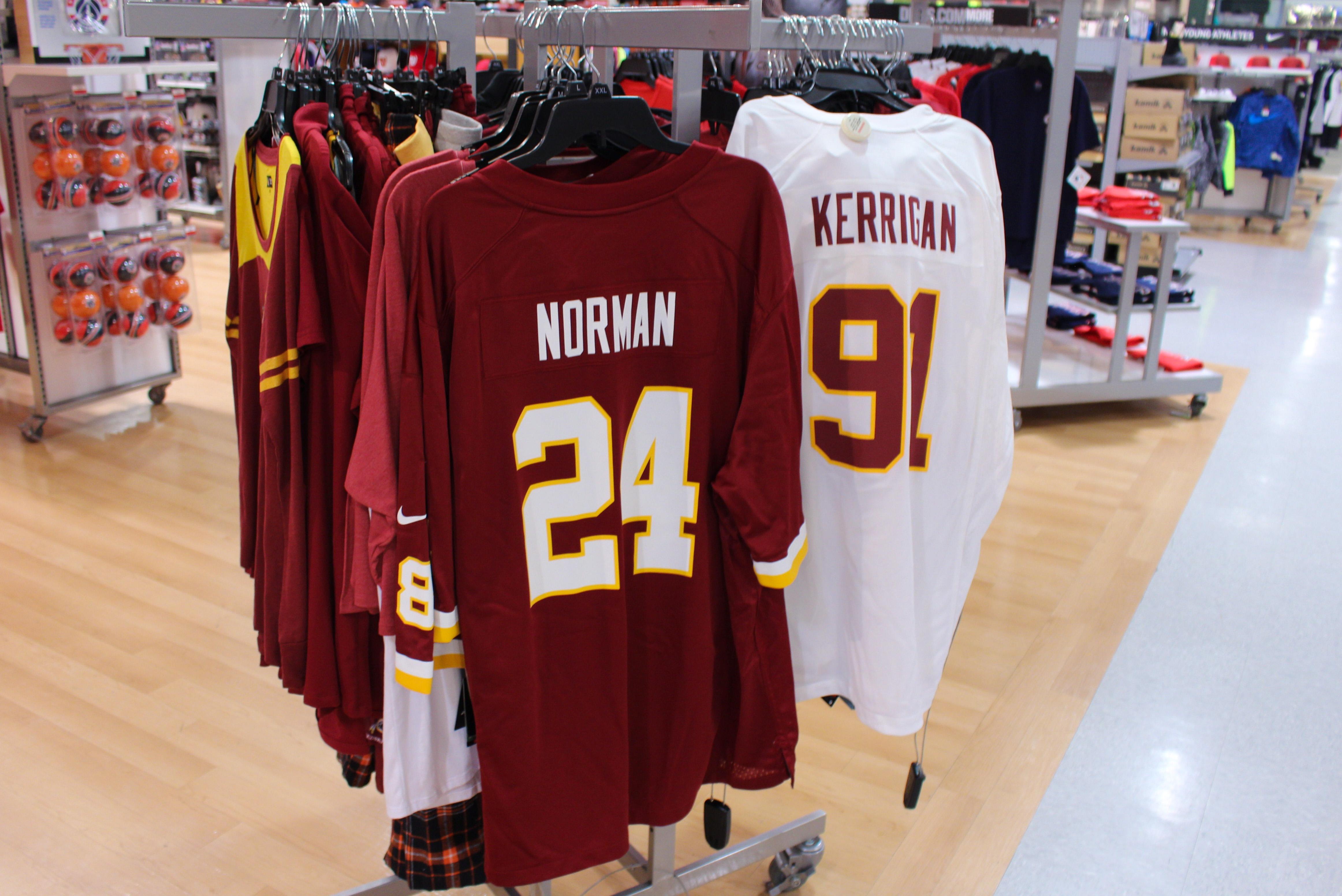 Photo: Redskins jerseys are a common site at Blair and other MCPS schools.

Photo: Redskins jerseys are a common site at Blair and other MCPS schools.

According to junior Hank Groberg, even given Hill's violent background, it's okay to wear a shirt bearing his name as long as you are doing so for the right reasons. "I mean, you shouldn't wear it if you aren't a Chiefs fan, because then you're supporting the player and he's a criminal. It's chill if you're a Chiefs fan because then you're just supporting the team," explains Groberg.

Some people might say that the prevalence of domestic violence and substance abuse issues in sports like football are enough for the only right move to be avoiding the sport entirely. For other fans, it's okay to keep wearing the team's gear even after a legal or moral infraction. Just ask Patriots fans. Sports will always have a moral gray area, and that area will always be darker for some than for others. So feel free to wear that throwback Mike Vick jersey; just be prepared for a heated argument.