Blazers shoot for athletic success in the aggressive, complex world of college recruitment

When senior varsity girls basketball co-captain Brittany Higgins received her first college recruitment letter in her junior year, it meant not only that she was one step closer to playing college ball and hopefully to her dream of someday playing in the WNBA, but also that she had just become, in National Collegiate Athletic Association (NCAA) jargon, a "recruited prospective student athlete."

As of that moment, Higgins could no longer exchange more than a quick "hello" with a college coach without it being considered an official face-to-face "contact" (illegal until the July after her junior year). Yet somehow, she was expected to sort through countless letters and phone calls on her own in search of her perfect match: a Division I school, preferably in North Carolina, that could offer her the right combination of academics and competitive playing time.

Higgins is among several Blazers and thousands of high school athletes nationwide who have entered the intricate courtship that is the college athletics recruitment process. As a greater number of talented athletes try to get a foot in the door of top schools, the process has become more competitive than ever, and in turn, coaches have become more aggressive in their pursuit of that elusive star athlete willing to sign on immediately. In order to secure the spot they want and avoid getting roped into the wrong contract, athletes must be willing to advocate for themselves both in getting exposure and in finding a school that matches their goals. 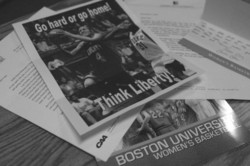 A variety of colleges (some local, some not) ranging from Division I to Division III have shown interest in Higgins, a three-year varsity basketball player who is generally among Blair's top scorers. At this point, she is very interested in High Point University and the University of North Carolina at Greensboro and has begun talking to coaches at both schools.

Although Higgins's experiences with college coaches and coaching assistants have been generally good, she knows of other athletes with horror stories of coaches calling morning and night. "They want to know if you're interested," Higgins says. "I've heard that some coaches just call, call, call. It gets kind of annoying if you're not interested," she adds.

Junior Cate Rassman, who plays with Higgins on both the Blair varsity squad and an off-season Amateur Athletic Union (AAU) team, has already seen her fair share of recruitment tactics. Although she is not 100 percent sure she will play varsity basketball in college, Rassman would prefer a Division I or II school such as Boston University, Penn State or the University of Delaware.

Rassman received her first batch of recruitment letters after she and her AAU team played in a college exposure tournament during the summer of 2004, where there would often be 50 college coaches at one game. "All the letters said, 'We saw you play, we think you have potential and we're interested,'" she says. Many of the letters continue to pour in from Liberty University in Lynchburg, Virginia, from which Rassman has come to expect unconventional mail ranging from comic strips featuring the girls on the team to holiday-themed letters. "They sent me a Valentine, a Thanksgiving thing," Rassman recounts with a laugh.

Ray Lauenstein, founder of "The Athlete's Advisor," a subscription newsletter based out of Boston, and author of "Baseball: Playing Outside the Lines," a guide to the college baseball recruiting process, feels that some coaches have become too aggressive in their recruitment tactics, especially with star players. "Technology has enabled coaches to stay in better touch with athletes and vice versa," he explains. "Due to coaches climbing the ladder or the university wanting better results faster, there is more pressure to win."

Strict NCAA rules exist to govern when and how coaches and student athletes can interact, so coaches must be creative in order to find loopholes and communicate with players. For example, coaches are allowed to contact an athlete in person and off the college campus only on or after July 1 following the athlete's junior year. Rassman remembers one coach who got around this rule by walking very slowly by one of her AAU teammates, showing off the college logo on his polo shirt and winking deliberately at the teammate.

Is it really worth it?

With so much competition and so many obstacles standing in the way of a student athlete and his or her dream school, the prospect of spending four grueling years juggling practice, games, academics and a social life can seem daunting, particularly considering the small percentage of student athletes who go on to play professionally. According to Lauenstein, the odds of a high school football player making it to the pros are about 6,000 to one, and the odds for a high school basketball player going pro are about 10,000 to one.

Lauenstein believes that the chance to play for a college team is plenty of incentive for a student athlete to navigate the ins and outs of the recruiting process and then to work hard in college. "You learn so much about yourself and how the world works by being part of a team, striving to reach goals, experiencing major emotional highs and lows, that you can't even compare it to anything a classroom would teach you," he says.

Lauenstein also feels that varsity sports can give some student athletes the drive to work hard in college. "Most athletes do well academically in season when they are more focused. If they suffer, it is usually in an offseason," he says.

Graduation rates, which the NCAA requires universities to show to prospective athletes at least one day before they sign a National Letter of Intent (a contract which applies to all Division I and II schools and requires the student athlete to attend the university for one academic year), support the idea that athletes are at least no less likely to drop out of school early than regular students. According to http://www.NCAA.com, 60 percent of all freshmen entering Division I schools during the 1997-1998 school year graduated within six years, while 62 percent of all students receiving some form of athletic aid did the same.

The tenacity of many student athletes in getting exposure for themselves is further evidence that the recruitment process is worth the effort for many. Rassman, who is planning to send out tapes to schools she is interested in, has teammates who are trying, sometimes too hard, to be recruited. "I know girls who tape every game, even ones against bad teams to make themselves look good," she says. "They will go up to [college] coaches and talk to them, which isn't allowed. That puts the coach in an awkward position."

Senior Jack Eisen-Markowitz, a three-year varsity soccer player who was accepted early decision to Emory University in Atlanta, a high-level Division III school, found that letting schools he was interested in know about him was necessary, as most of the recruitment letters he received were from schools he "had never heard of." "In general, unless you're amazing at soccer, you have to initiate contact," he says. Eisen-Markowitz sent Emory a tape of himself playing, since none of his club team's tournaments brought him close enough to Atlanta for a coach to watch him in action.

In addition to enthusiasm and athletic ability, thorough knowledge of the recruiting process and one's educational and athletic goals are important for players who want to secure a position at a school where they will be happy, says Lauenstein.

Lauenstein feels that the biggest mistakes student athletes make are not being proactive in contacting coaches at schools they are interested in, starting too late in the recruiting process, forgetting to find a well-rounded college match with strong academics and athletics and listening to advice from the wrong people. "Ultimately, most people are happy where they feel the most comfortable. That is something only they can judge," says Lauenstein.

Hopefully, come signing day, both Rassman and Higgins will find schools where they are comfortable and where they can reach their athletic potential while learning and enjoying college life, as Eisen-Markowitz has. Perhaps, amid those piles of recruitment letters, there is one from such a golden match.

Ellie Blalock. Ellie is a SENIOR in the CAP program at Blair. She enjoys such activities as traveling, being able to say "water" in six languages and having heart-to-heart chats with eccentric politicians. If you're in need of a laugh, please ask Ellie about her driving record...you … More »