B-CC edges out Blair for the win

The disheartened Blazers (1-2) trooped off the field after the Bethesda-Chevy Chase Barons managed to secure a close 2-1 victory in the last two minutes of the game. Blair stayed in the game right until the end, when B-CC sneaked a goal in to pull ahead for the win. 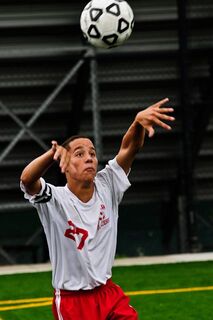 Despite their hustle on field, the Blazers were having an off day. "It was not one of their better games,” coach John Haigh said. Senior co-captain Aaron Baldwin and senior Otis Banwell were able to push the ball aggressively into Baron territory after tackling the ball away from B-CC players, but the ball went up and down the field continually as both teams struggled to move the ball close enough to the goal to take a shot.

Blair entered the game already behind, as Haigh benched six starting players for the beginning of the first half. According to Haigh, the six players were penalized for coming late to study hall and skipping practice. Haigh expected a difficult start, but wanted to see if any of the other players would rise to the challenge. "The bench is going to have to step it up,” said Haigh.

At halftime the game was still tied at 0-0, as most of the action stayed in the midfield, and occasionally darted near the goals. And although Haigh's pregame speech stressed the importance of possession, B-CC held onto the ball for a majority of the game.

Photo: Senior Xander Baldwin races down the field in an attempt to score.

Photo: Senior Xander Baldwin races down the field in an attempt to score.

Junior goalkeeper Kit Durban made several saves during the game; however, about five minutes into the second half, a Baron was able to maneuver past the Blair defense to send a ball streaking into the net. With a series of give-and-go's, the B-CC offense blew past the Blazers in the second half while several attempts by Blair to send the ball back into B-CC territory fell short. Breakdowns in communication and failure to make timely passes to open players inhibited the Blazers from playing to their potential. "We experimented with different defensive structures, some worked, some didn't,” senior co-captain Xander Baldwin said.

Twenty minutes after B-CC brought the score to 1-0, Banwell assisted sophomore George de Rossi to tie the match. It was de Rossi's first goal as a varsity player. The goal livened up the Blazers as they worked to keep the ball up near the Baron goal. The defense, led by senior Jaime Amaya, kept B-CC from putting in several more goals. 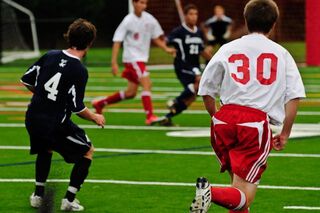 Unfortunately, another ball sent by a B-CC player landed in an open net, putting the Barons ahead with about one minute and 40 seconds left to play, not nearly enough time for the Blazers to regroup and retaliate. "We didn't communicate enough,” said Aaron Baldwin. "We got tired at the end.”

The team has already set their sights on their next match-up against Magruder. "We're just going to worry about playing our game against Magruder,” Haigh said. The captains are equally optimistic about their next game. "We have a lot to work on,” Aaron Baldwin said. "But we're gonna bounce back and get the win.”