Back-to-School barbecue to be held Friday

The SGA will hold its second annual Back-to-School barbecue in the courtyard on Friday, Sept. 7, from 3 p.m. until the start of the varsity football game against Blake at 6:30 p.m. 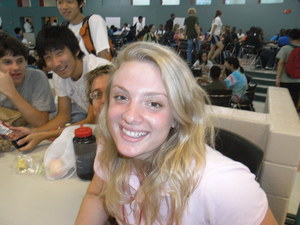 Back to School BBQ

Photo: Francesca Blume, SGA Director of School Spirit, says the barbecue will be a good way for Blazers to get pumped up for the first football game.

Photo: Francesca Blume, SGA Director of School Spirit, says the barbecue will be a good way for Blazers to get pumped up for the first football game. Photo courtesy of Monica Wei.

According to SGA Vice President Amina Goheer and Chief of Staff Vijay Baharani, this year's event will feature a football toss, live music from Blair bands and face painting.

This week, SGA will be handing out fliers that can be redeemed at the barbecue for free dessert. Other foods offered include hamburgers and hot dogs, which will cost $2 and $1.50 respectively, and Blazers who purchase a hamburger or a hot dog will each receive a ticket for a free soda. Chips and soda will be 50 cents each, and bocca burgers will be offered as a vegetarian alternative to the hamburgers.

SGA Director of School Spirit Francesca Blume, who is overseeing the event, looks at the barbecue as a social gathering for Blazers. According to Blume, this event is a good way to raise school spirit, welcome kids back to Blair and allow for new students to meet one another. "We just want people to have a fun time and get pumped up for the first football game," Blume said.