Young people en route to the real world are inheriting a country that faces a number of challenges. Voting is "one of the big steps to taking responsibility for the society you live in," according to State Senator Jamie Raskin, who represents Takoma Park and part of Silver Spring. "Many of the great social movements in American history were led by young people."

Nonetheless, only 41.3 percent of the eligible population voted in the 2004 election, according to George Mason University's United States Elections Project. "America has one of the lower voter turnouts of democracies on earth," Raskin laments. "I think it's time for this generation to offer real leadership." 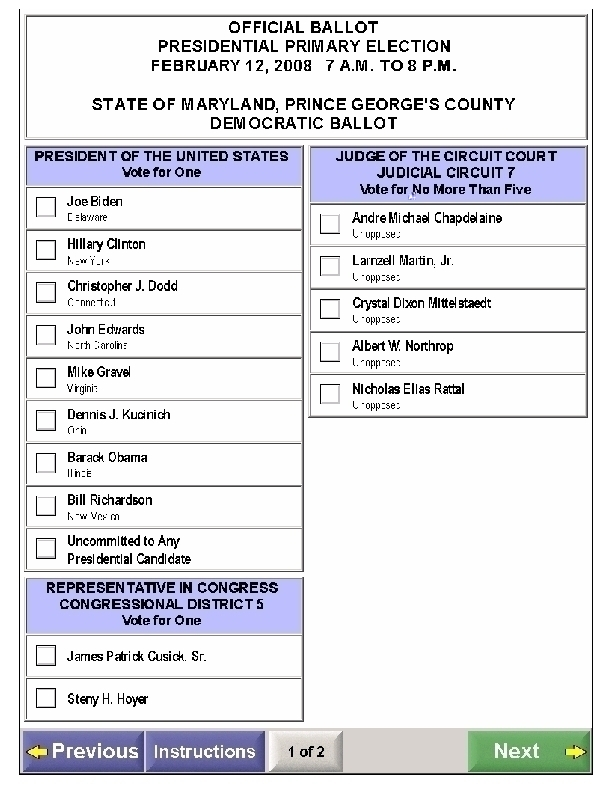 Photo: A sample Democratic ballot from Prince George's County. Graphic courtesy of the Maryland Board of Elections

Photo: A sample Democratic ballot from Prince George's County. Graphic courtesy of the Maryland Board of Elections

As of this month, it's even easier – 17-year olds in Maryland who will turn 18 by the Nov. 4 general election can vote in partisan races (i.e. President, Congress, Delegates to the National Conventions) in the February primary elections, according to a Maryland State Board of Elections press release.

And now is a fiery time to participate in America's democracy, according to Raskin. For the first time in over fifty years, there will be neither an incumbent president nor vice president on the 2008 ballot. "This election presents a dramatic choice for Americans," he says.

Applying to register to vote is a simple process with a lasting impact. "I'm certain that when Blair kids put their minds to it they can register and vote," Raskin says.

Fill out a straightforward, two-page application at one of several designated locations or download the form online and mail the application in to the County Board of Elections (address designated on application form). The application will require a Maryland Driver's License or a social security number. You should receive a Voter Notification Card in the mail sometime during the following three weeks. This notice will include your personal information, party affiliation, assigned polling place and respective election districts. You are now considered a registered voter.

The application will ask you to affiliate with a political party. Generally, the parties have the same goals, but differ in their methods of attainment. According to their official party web sites:
•Democrat – represents the liberal ideology, which includes a more active federal government for regulation of business, social welfare, protection of minority rights and private social freedoms
•Republican – aligns with the conservative ideology, which includes more limited government, traditional social values and tougher policies towards lawbreakers
•Libertarian – platform focuses on peace and personal freedoms
•Green – platform focuses on social and environmental reform

Besides electing our country's next leader, Marylanders will be choosing local officials who, according to Raskin, may have a more direct impact on Blazers' lives. "A lot of issues affect schools themselves," he says, citing examples like upgrading the quality of cafeteria food, improving attendance and working to make school "a much more meaningful and attractive experience for students who live everywhere in Maryland."

Neither Senator is up for reelection in 2008, but the following other races will appear on the ballot in November:
•Board of education members (local)
•Circuit court judges (local)
•Representative in Congress (federal)

For more information call the Montgomery County Board of Elections 24-hour voter information hotline at (240) 777-VOTE or visit them on the web.