"Balls of Fury" is not very furious

Huge comedy about tiny balls delivers half the package

In this sports comedy directed by Ben Garant, a disgraced ping-pong champion is given a shot at redemption and a chance to avenge the death of his father in the world of secret underground ping-pong tournaments.

Randy Daytona (Dan Fogler) used to be the best player around until the 1988 Summer Olympics, where he slipped up and the Chinese triads killed his father who had bet on the game. Nineteen years later, he is recruited by a FBI agent named Rodriguez (George Lopez) to win an upcoming ping-pong tournament and track down Feng (Christopher Walken), the man responsible for his father's murder. To get his pong skills back up to par after years of matinee shows in Reno, Daytona seeks the help of blind ping-pong expert Master Wong(James Hong) and his beautiful niece Maggie Wong(Maggie Q). 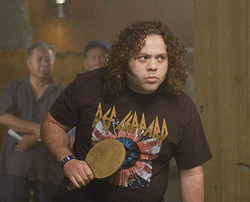 Photo: Randy Daytona (Dan Fogler) is a ping pong player with something to prove in "Balls of Fury."

Photo: Randy Daytona (Dan Fogler) is a ping pong player with something to prove in "Balls of Fury."

This is one of those movies where you can walk in and out of the theater and not miss anything, there are so many gags and zippy one liners it's as if they're trying to make you forget the plot. Although these jokes are funny, they get old after a while, a blind man walking into things and asking "What am I missing?" when something important happens can only go so far. However, one has to step back and admire the showmanship of the actors, considering most have never played ping pong before, and have trained to be able to pass themselves off as professionals.

The best performances came from George Lopez, whose unique way of delivering crude humor can't be imitated, Lopez who is usually known for his stand-up routines and T.V. show managed to pull off a perfect impression of Tony Montana from Scarface. Christopher Walken also manages to portray a crime lord and ping-pong enthusiast at the same, in the way Walken usually does, in a patient, slow, almost mumbling voice no matter the topic, whether it's ping pong death matches or his wardrobe.

But the one who stole the show was Maggie Q, whose gymnastic arsenal is one to be reckoned with, with her, ping pong is not a sport but an art.

"Balls of Fury"s main flaw is that it tries to be too much. It could have been a kung fu movie, a movie about revenge, love, comedy, just ping pong or even a Def Leppard musical. But it fails at mixing all these themes into an original film no matter entertaining it was.