Banding together for all the right reasons

For the first time in Blair history the annual SGR Spectacular, a showcase of bands and student acts aimed to raise money for charity, teamed up with International Night to produce a mega talent show. The result was a series of cultured, cool and constantly entertaining performances, with all proceeds directly benefiting aid organizations "Doctors Without Borders" and "Vonumu International" as well as Blair's ESOL newspaper "Silver International."

The night began quietly, with a series of polished acts by Blair's African Club, the Hispanic Club, the Caribbean Club, the Ethiopian Club and Middle Eastern Dance Club for International Night. The African club set the mood for the first act with a fashion show set to bongo drum beats, starting the show off with a fun and rhythmic vibe. 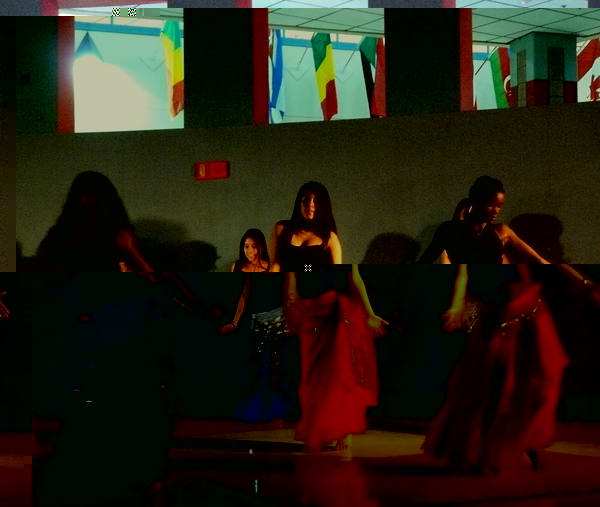 Photo: Middle Eastern dance club put on a belly dancing number at for the international segment of SGR Spectacular.

Photo: Middle Eastern dance club put on a belly dancing number at for the international segment of SGR Spectacular.


The Caribbean Club veered from the traditional with their segmented dance routine, resembling a step team performance. The club fell into formation with a series of traditional Caribbean songs mixed with some modern beats, and the group's performance seemed graceful and well rehearsed.

Shortly after, in one of the best acts of the night, Blair's Middle Eastern Dance club (led in part by seniors Courtney DeLuca and Laura Cole) took the stage to perform a group bellydance. Well-timed individually and as a whole, the group's performance was well-executed and zesty — and definitely helped to draw in some fresh faces from the back row.

Another notable performance was the Hispanic Club's tango routine. A quartet of dancers from the club, paired in matching red, white and black ensembles, rendered some excellent rhythmic dancing for the crowd and provided a pleasant finale for International Night.

The SGR Spectacular portion of the program began with some witty banter from emcees Terrence McPherson and Breton Sheridan, who continued to narrate and push for donations for the rest of the evening. Two solo acts fronted the transition well; sophomore Corinne Ducey's piano and vocals solo performance and Blair junior Ben Simon's recitation of original poetry gave mellow but unique performances, and the audience responded well.

But the night really got rollicking when "Action Jackson and the Go-Getters," (fronted by sophomore Sam Barth) did an air rendition to the beloved Journey song "Don't Stop Believin'." Remarkably believable (even with a suspect lack of instruments…), the group was enthusiastic and hilarious, screaming and soloing in a fashion quite appropriate to the tragically lost genre of screechy hair metal.

Even as the group struggled to contend with the loud room on insufficient microphones, Blair's a capella group InToneNation (conducted by senior Diego Ardila) provided some dulcet rhythms that lent a nice finish to the first act. Beginning with a rendition of The Beatles' "Paperback Writer," the group sang well, in perfect tune with one another, and the alto solos led by Corinne Ducey and Annie Ropeik were very satisfying. At the end of the first acts, the crowd hustled to the "arm wrestling" table during intermission, where students competed for championship titles. 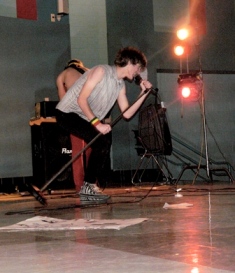 Photo: A Blazer rocks out as the lead singer of a local rock band at SGR Spectacular/International Night held Friday evening in the SAC.

Photo: A Blazer rocks out as the lead singer of a local rock band at SGR Spectacular/International Night held Friday evening in the SAC.


In Act II, the show abruptly changed gears from placid performances to shout-worthy solos as a Blair-based Jazz Band started the scene with an amazing three song series, sometimes veering into improvisation. The group was enthusiastic and very talented, and combined with some excellent solos by senior Ele Rubenstein on drums and Einstein junior Elijah Balbed on saxophone, the group was easily one of the night's best acts.

Falling into a more contemporary stride, Blair band "Ninjas on Ebola Virus," led by the exceptional voice talent Diego Ardila, played some old favorites that set the crowd to singing along. The group's renditions of Green Day's "Longview," Led Zeppelin's "Moby Dick," and a very enthusiastic cover of Weezer's "Say It Ain't So," nearly brought the audience to their feet.

After a brief pause in set-up as the bands shifted drum kits, Blair band "Fist of Ruin," took the stage by storm, launching into a set of Rancid and Misfits covers that relied heavily on the throaty vocals of junior Kat Wurzbacher. While slightly more raw than earlier acts, the band was loud and passionate, working well off of one another's instrumentals. The group's cover of Rancid's "Maxwell Murder," was especially fun —Wurzbacher quickly engaged the audience with her fast paced shouting.

With next Blair-based band "Break the Balance," the SAC seemed to morph into a CBGB's stage circa 1970. With each of the members arriving in astonishingly slim skinny jeans, BTB put on a very passionate performance; frontman Joey Garcia writhed around on the floor, tangled himself in the microphone and still managed to produce a set of piercing vocals. Despite the sound technician's cringes for the sailing microphone, the audience responded well.

Falling slightly over the 10 o'clock mark with the last act, Blair Band "Hellcast Nightmare," senior Anton Kellner led the skillful metal quartet with some shrieking vocals. While just as enthusiastic as the bands before them, "Hellcast," felt more unified — and senior Eric Peterson's bass solo was enervating and impressive.

The SGR Spectacular was successful on several fronts, raising awareness for genocide in Darfur and providing quality entertainment. Ranging from mellow piano solos to choreographed ethnic dances to Iggy Pop-esque bands, the evening's performances served to show off the wide range of talent in the Blair community. In conclusion: a spectacular evening.


Brittany Allen. Brittany Allen is a sleep-deprived CAP SENNNNNIOORRR with a penchant for treading the boards in the Blair auditorium floor. When not spreading the love in Silver Chips Online, she acts as co-director of Blair's Young Thespian club with the fabulous and all-powerful Caitlin Schneiderhan. She … More »