At midnight if you listen out the window, you can hear the neighbors playing table tennis. During the Olympics, they celebrated every night with their television turned up to maximum volume. They're Chinese immigrants and they live next door in an apartment complex full of Buddhists. There's a statue of a Hindu idol outside the gate. 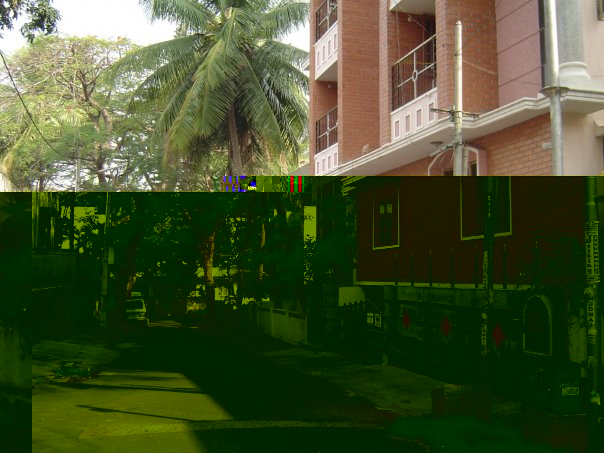 Photo: It's all good in the 'hood - this neighborhood, from where I write these words, is comprised of people from myriad backgrounds who coexist peacefully and happily.

Photo: It's all good in the 'hood - this neighborhood, from where I write these words, is comprised of people from myriad backgrounds who coexist peacefully and happily. Photo courtesy of Sonalee Rau.

Walk down the street and you come to a small open room with a diagonal wall (it faces Mecca) where a group of Muslims prays daily. As they read from the Koran, their chanting carries past the laundromat next door, which is named after a Hindu god, Basaveshwara.

Go down to the shopping district in this part of Bangalore. It's called Fourth Block and it's home to the most popular beauty salon in the area, run by a Chinese family. All the owners are fluent in Hindi.

Turn right and you'll find the home of a Japanese couple who have lived in the neighborhood - and celebrated traditional Indian festivals - for five years.

An American mother originally from New York lives down the street. She wears a traditional Indian salwar kameez to work every day.

And this is just one small neighborhood in the city. In light of the incredible range of religions and backgrounds which exist here, I like to say that the rarest type of person in Bangalore these days is a Bangalorean. But in a way, I realize now that everyone here is a Bangalorean. I admire them for how easily they let in a culture of which they know so little, defying racial stereotypes and breaking barriers daily, when I could do so much more to appreciate this country I've been visiting my whole life.

This is no longer the homogeneous Bangalore of ten years ago. The diversity reminds me of another place I know well: Blair Boulevard.