"My, how THIN you've gotten! Come in and eat something!"

Every Indian has heard this upon visiting the home of a long-lost relative. Whether or not one has actually lost weight is irrelevant. If someone asks you if you want more food at an Indian meal, it's a rhetorical question. 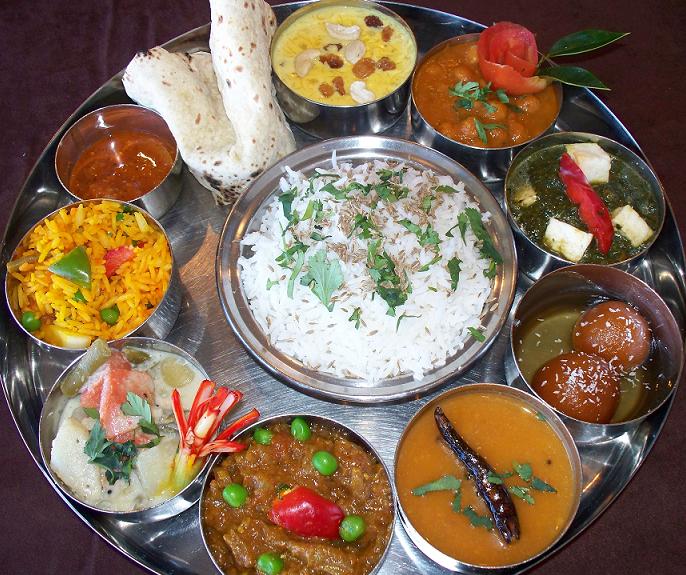 Photo: Think your plate is full? The only way to politely turn down more food at an Indian meal like this is to physically bend over your plate, preventing anyone from serving you more. Picture courtesy of Woodlands Restaurant.

Photo: Think your plate is full? The only way to politely turn down more food at an Indian meal like this is to physically bend over your plate, preventing anyone from serving you more. Picture courtesy of Woodlands Restaurant.

Eating and cooking are almost as important to the daily routine here as weddings, which are really just an excuse to cook and serve elaborate banquets to guests, anyway. People have been known to sneak into Indian weddings for free food (remember, so many relatives are invited that no one would be able to tell the actual invitees apart from the wedding crashers).

Recently, after paying a visit to the local physician, I was told that I should try to "improve my weight." Surprised, I set about cutting down on calories - until I asked a Bangalorean, who informed me that in India, improving one's weight means gaining weight. Well, after all, since the sari, the national garment of Indian women, is just a long piece of cloth wrapped around the body, it's one-size-fits-all - so what's a little weight gain here and there?

The passion for food here manifests itself in many ways. Indians love fast food. Small, standing-room cafes called darshinis where you can order Indian specialties are everywhere in this city. And many favorite foreign cuisines, like Chinese and Italian food, have also been Indianized. Forget Kung Pao chicken; here we've got Vegetable Balls in Garlic Sauce, for the primarily vegetarian populace. Domino's also offers several Indian varieties now, including a corn pizza with paneer (a type of Indian cheese.) But Indians aren't picky. They'll eat nearly anything - from French toast to pasta - if it's served with ketchup.

So as 2008 draws to a close, many people are resolving to shed a few pounds - er, kilograms - next year. That's only going to get harder to do here in Bangalore, though: Taco Bell comes to India in April.