Barack Obama: the next FDR?

By passing 12 pieces of New Deal legislation during his first 100 days in office, 32nd President Franklin Delano Roosevelt set a monumental standard for subsequent presidents to follow. Although a president's first 100 days were an insignificant matter before FDR's presidency, this period became a benchmark of political effectiveness after Roosevelt set his golden standard. In fact, 70 years later, the first 100 days are still used as a predictor for the future success of a president's term.

Reaching its end on April 29, President Obama's first 100 days have been constantly compared to FDR's. The two presidents' situations when they took office are analogous - FDR had to work through the Great Depression, and Obama is similarly stuck presiding during times of economic turmoil. Their domestic policies are comparable as well. FDR had to enact numerous pieces of legislation to stabilize and stimulate the economy and Obama is in the same boat, having pushed for a hefty economic stimulus package. Yet despite these resemblances, Obama and FDR's first 100 days have some key underlying differences. 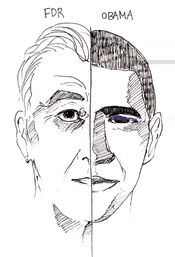 Although both presidents have faced - or are currently facing - difficult financial situations, the country's economic crisis during FDR's presidency was considerably worse than what the Obama administration has encountered up to this point. Obama has had the time to focus on concerns other than America's economic meltdowns, specifically in foreign policy. In contrast, FDR's first 100 days were far more urgent economically. FDR was faced with a choice between focusing on the domestic banking emergency and enacting the Emergency Banking Act, or risking complete chaos as financial markets melted. Creating a multitude of New Deal legislation was crucial to saving the stock market from complete damage. Currently, despite certain hardships, Obama is presiding over a much more stable economy. Unemployment is at 8.5 percent, compared to an unemployment rate of 25 percent at the onset of FDR's term. Both presidents' 100 days have focused largely on the economy, but due to a slightly better financial situation, Obama has less short-term urgency in pushing for his $787 billion stimulus package to go through.

Obama may have less pressure than FDR in convincing Congress to get his economic policies signed, but unlike FDR, Obama will need to exert more effort in actually seeing his policies put in place. 2009 is a whole new time and place - the Republican Party has undergone extensive changes since the 1930s. Whereas Roosevelt was able to race through the ratification of 12 acts with seeming ease, Obama will have a harder time confronting an unrelenting Republican Party. Recently, Obama succeeded in passing his $3.53 trillion federal budget along with his stimulus package, but future financial bills are predicted to arouse more partisan debate than support.

These days, Obama has more than just the economic hype running through his mind. Unlike Roosevelt's first 100 days, Obama's 100 are more concentrated on foreign policy, rather than just domestic issues. In Iraq, Obama is sticking true to his word and withdrawing American forces. In Afghanistan, Obama will send in more troops to control terrorism. Lately, Obama has spent time travelling abroad to various international regions, including Latin America, the Caribbean and several European nations, in order to strengthen United States' global support. In contrast, Roosevelt centered his concerns largely on an array of domestic issues, such as the creation of farm, rural and monetary reforms programs.

Obama may not pass 12 pieces of legislation during his 100 days, but there is no need for him to compete with Roosevelt's standards or mimic his policies - we live in a different time and are dealing with a different situation. In fact, Obama can and should deviate from FDR's model. In the long run, Roosevelt erred towards conservatism with economic policies, which led to problems with the New Deal in the long run. What Obama needs to do is to learn from Roosevelt's policies to bring radical reform. Is Barack Hussein Obama (aka BHO) going to be the next FDR? For now, Barack Obama sounds and is much more appropriate.