Barely reaching the "Edge of Darkness"

Mel Gibson is the redeeming aspect of his comeback film

After a seven-year hiatus, Mel Gibson returns to the other side of filmmaking in "Edge of Darkness." Gibson made his mark as director of the heart-wrenching and controversial "Passion of the Christ" in 2004. Indeed, "Edge of Darkness" will be known as Gibson's comeback film. Love him or hate him, there is no denying this man's acting ability in a film with an otherwise dull script and convoluted plot. 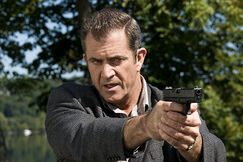 Photo: Mel Gibson is back as homicide detective Thomas Craven. When his daughter is mysteriously killed one night, Craven unravels a government and corporate conspiracy as he tries to find his daughter's killer.

Photo: Mel Gibson is back as homicide detective Thomas Craven. When his daughter is mysteriously killed one night, Craven unravels a government and corporate conspiracy as he tries to find his daughter's killer.

Gibson's character is Thomas Craven, a Boston homicide detective who has seen all there is to see in local crime – or so he thinks. When his only child, 24-year-old Emma (newcomer Bojana Novakovic) is killed on his doorsteps, Craven takes on an intense investigation to find her killer. As he digs deeper, Craven is thrown into the dangerous world of government cover-ups and corporate subterfuge. Meanwhile, he slowly and painfully embarks on his own odyssey to find internal peace.

"Edge of Darkness," though marketed as an action movie, does not have the explosions, gun battles and drawn-out fist fights found in staple films of this genre. The film simply doesn't have the eye-candy appeal of box office behemoth "Avatar." The props and actors in most scenes appear used and weary. Even the set for the villain's headquarters appears recycled from "Casino Royale."

"Edge of Darkness" was filmed mostly in Boston and comes complete with Boston's rainy and gritty background. The grisly murder scenes and strange sentimental flashbacks stand in stark contrast to the tired feel of the movie. What the shocking murders add to the film, the out-of-place flashbacks take away.

Without strong directing, the actors are left to fend for themselves - but they manage to do so successfully. As shown in his performance, Gibson is starting to cultivate his spot as the new Clint Eastwood. Hollywood will always need a grumpy man who has a taste for revenge. With the days of his youth far behind him, Gibson's poker face, lined with wrinkles, tells the story of bitter cop with nothing to lose better than the script can. While there have been too many films to count with the bad cop premise, Gibson's performance stands out.

Now, if only Gibson could make his Boston accent flow smoothly. This is a problem that plagues most of the actors in the film. The accents are exaggerated and distracting. The actors actually drop every single "r" - the dialect coach must have been busy during production.

The movie's dialogue - in addition to dialect - falls short. The cheesy, clichéd lines are as boring and bland as the setting of the film. A well-developed script is necessary for a plot as jumbled as this one. The film struggles to formulate an intricate government conspiracy and ends abruptly to fit the time constraint. To put it bluntly, the ending leaves the audience feeling unsatisfied.

While it teeters on the edge, this film never plunges into the glorious darkness. The performances are very entertaining, but the screenplay is noticeably lacking.

The Edge of Darkness is rated R for strong bloody violence and language. Now playing in theaters everywhere.