Despite the loss, head coach Nina Hagan was thrilled with her team's commitment to the game. "No matter what the score was, you never got discouraged. I don't care about the result - we gave them a good show," she said in a post-game speech. 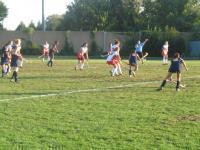 Photo: The JV field hockey team defends against a strong B-CC squad. They lost the match 6-0.

Photo: The JV field hockey team defends against a strong B-CC squad. They lost the match 6-0.

The Barons controlled the pace of the game from the opening whistle, freezing Blair's defense with aggressive drives down the middle and quick outlet passes to receiving players near the sideline. The Barons' most threatening assaults came from advances down the right sideline, where a skillful Baron forward took possession of the ball and dodged defensive blocks to emerge unchallenged near the corner.

But dangerous crosses from the sideline were promptly cleared by a more coordinated Blair defense in the shooting circle. Tight man-to-man marking and powerful defensive clears frustrated the B-CC offense, whose formidable attacking force was thwarted on numerous scoring opportunities. Sophomore Lyla Shapiro was instrumental to the Blazers' success blocking corners, rushing out to meet the receiving player and forcing mistakes that enabled the Blair midfield to regain possession the ball.

Hagan was pleased with the Blazers' defensive acuity. "The defense held their positions very well," she said in a post-game speech. "We covered well and tackled non-stop."

An otherwise reliable defensive line surrendered many corners to the Barons, who scored their first goal indirectly off a corner play. Freshman goalkeeper Molly Flannagan came out of the cage to clear a dangerous ball, but the Barons quickly regained possession and fired a shot that was blocked by a defender. The referee declared the block illegal and awarded B-CC a penalty stroke, enabling the Barons to score near the end of the first half.

The Barons opened the second half with resolve, penetrating the Blair defense with a series of passes through the middle and firing off a shot that narrowly missed the cage. The defense rallied after this close call, relying on the confident play of freshman Helen Bowers to prevent more advances on the shooting circle.

Undeterred, B-CC continued their offensive attacks to score two quick goals. The Barons scored from the top of the semicircle for their second goal, firing a powerful long-distance shot that went crashing into the cage. The third goal came after BCC forwards powered through several defenders to hammer in a quick shot.

A more substantial defensive breakdown enabled the Barons to pound in their next three goals. Blair players stuck with their marks dutifully, but were hesitant to challenge the opponent taking the ball down the field. Unimpeded, B-CC forwards advanced to the shooting circle and knocked three quick shots into the cage, bringing the final score to 6-0.

Hagan acknowledged this late defensive collapse in her post-game speech. "When the girl with the ball happens to be dead center in front of the goal, you need to leave your mark," she said. "The last three goals were scored because they were there, and we weren't."

The Blair midfield, led by Shapiro and freshman Elizabeth Noxon, retaliated with a few potent assaults on the B-CC defense. The Blazers' best scoring opportunity came when sophomore co-captain Lauren Rust muscled through three players to advance the ball past midfield. A pass sent across the field didn't quite reach Shapiro, but she tackled a defender to take possession and lead a successful drive down the left sideline.

Rust was satisfied with their performance. "We played really well and never got discouraged," she said. "I think we were scared at first because they're such a good team."

The Blazers' next home game is Tuesday, Oct. 7 against Churchill at 5:00 p.m.