Baseball wallops Whitman to advance in the playoffs

In a dramatic victory Wednesday, Blair baseball defeated Walt Whitman High School 15-4, avenging last year's loss that knocked the Blazers out of the playoffs. After falling behind early in the game, Blair scored twelve runs in the fourth inning to call the mercy rule.

The game started on a somber note, as the Blair baseball community mourned the death of Lowell Ensel, a former Varsity co-captain. A note from JV coach Gordon Pavey, who coached Ensel from 2004 to 2013, was read over the PA system. "Every year, Lowell would write a note, thanking me for coaching him that season," Pavey remembered. A number of Varsity alumnus, as well as Ensel's parents, attended the ceremony.

Blair started the game playing with energy and vigor. Starting pitcher Peter Berger retired the side in the top of the first, and Blair scored two runs in the bottom, off of a double by Senior Jorge Noda and a sacrifice grounder off the bat of captain John Ramsey. 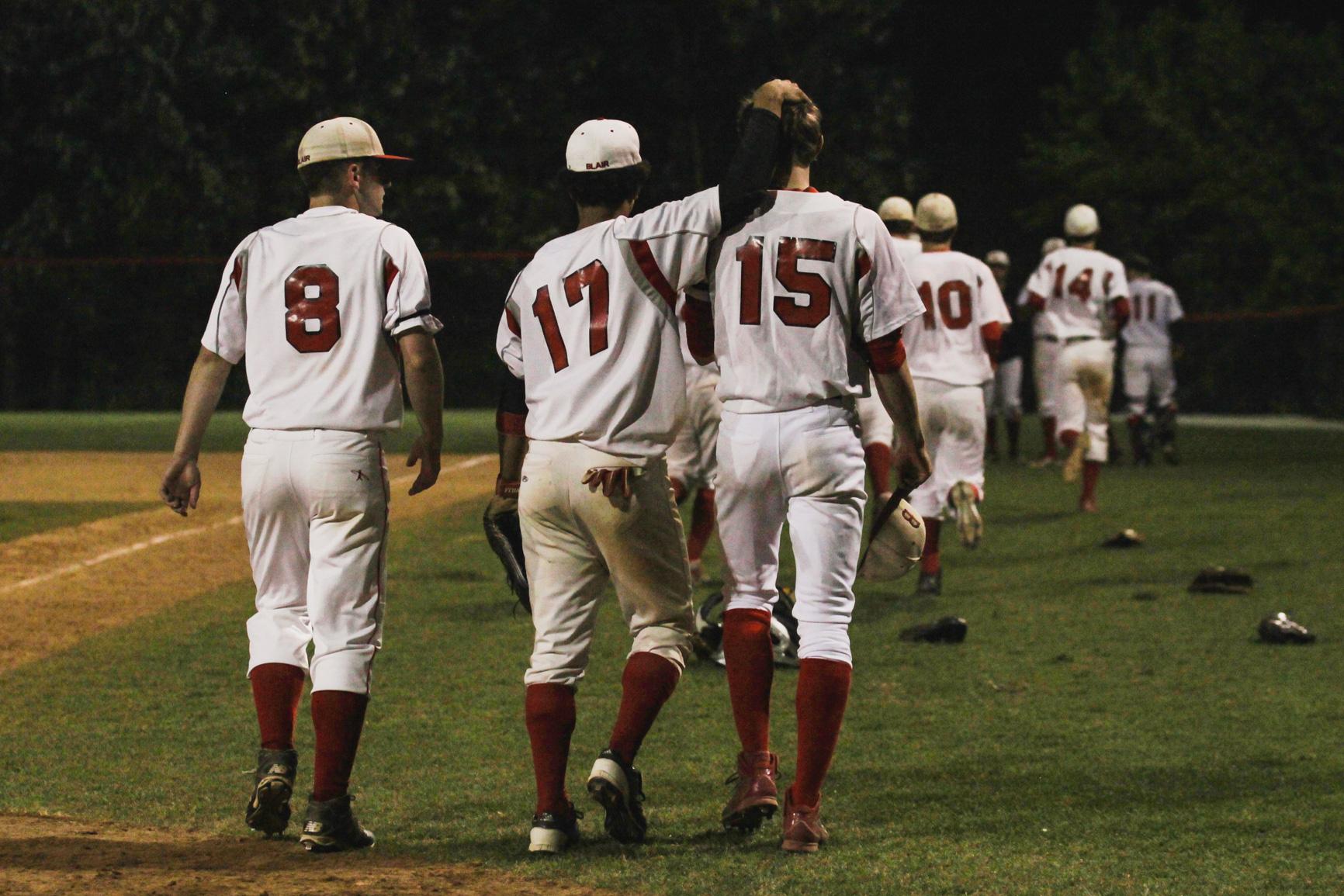 By the top of the fourth inning, Blair had tacked on one more run, and Whitman had scored two. Berger struggled in the fourth, making a throwing error on a ground ball that allowed a runner to make it to first. A single brought Whitman runners to first and third. Berger was removed from the game and replaced by junior Ian Donaldson. Defensive errors continued to plague the Blazers, as a sacrifice bunt brought in a run, tying the game at three, and the Blair defense failed to record an out. After walking the bases full, a passed ball brought in another run to give Whitman a 4-3 lead but the Blazers escaped.

After Whitman took the lead, the once rowdy Blair fans were silent. The silence didn't last for long. After junior Bobby Pfefferle struck out to lead off the inning, the Whitman pitcher walked the bases full. Senior Alex Frandsen tied up the game, taking a walk on a 3-2 count. After the Whitman pitcher was replaced, Blair's offensive aptitude continued. After a passed ball gave Blair a 5-4 lead, captain Max Salzman hit a sharp grounder down to first, which was bobbled by the Whitman first baseman, allowing a run to score. Distracted, the Whitman first baseman turned his back from the field, allowing another Blair run to score for a 7-4 lead.

After that, it was off to the races for Blair's offense. Whitman cycled through three pitchers in the inning, each more ineffective than the last, and Blair cycled through its entire lineup. After the dust settled, Blair was ahead 15-4. After easily retiring Whitman in the top of the fifth, Blair was on its way to the next round of playoffs. 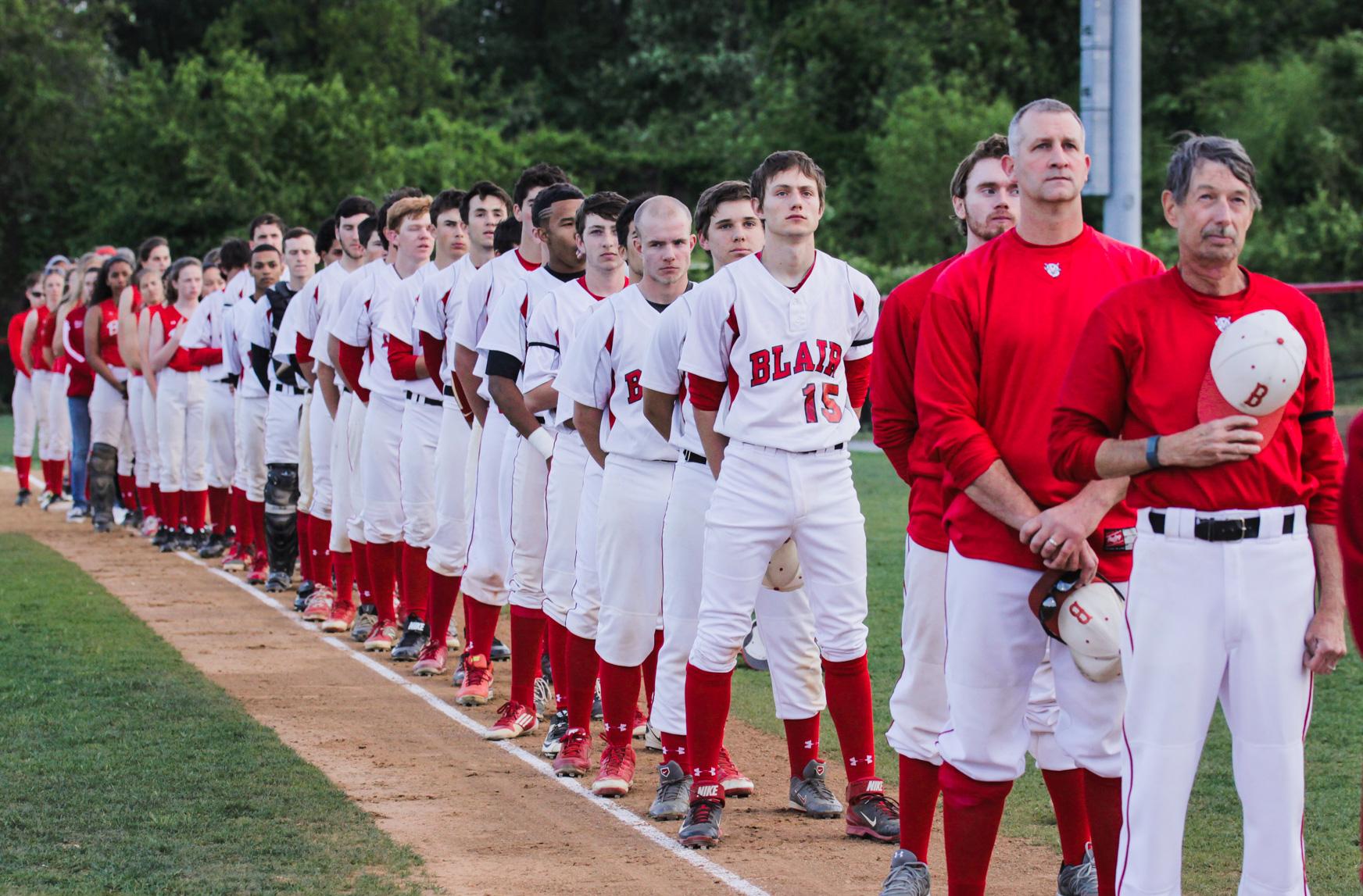 Photo: Blair was ready from the beginning.

Photo: Blair was ready from the beginning.

Blair coach Eric Zolkiewicz attributed Blair's victory to its persistence. "We never quit. We played quite poorly defensively in the beginning of the game, we gave up a lot of runs we shouldn't have. But the crowd was great, I think they rattled Whitman a bit, and we stuck with it."

Blair captain Max Salzman invoked Lowell Enser in describing Blair's win. "This whole game was for Lowell, to honor Lowell. In the beginning of the game we didn't honor him, but we pulled through...It's an honor to wear his number."