"Bat out of Hell": Back to success

Classic rock and roll musicians know how hard it is to produce an album that is new enough to keep our attention but not so different to disappoint loyal fans. And even with nearly 40 years under his belt, Meat Loaf finds the perfect balance between these needs in his newest CD "Bat out of Hell III: The Monster is Loose." 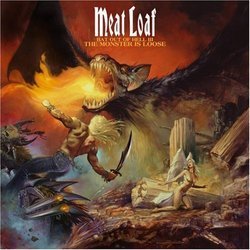 Born as Michael Lee Aday, Meat Loaf gained fame among younger crowds through his roles as Bob in "Fight Club, " The Lizard in "Formula 51" and his upcoming part in "Tenacious D and the Pick of Destiny" as Jack's father. In addition to such appearances, Meat Loaf‛s music has also been featured in films like 2001's "Josie and the Pussycats" and "The Rocky Horror Picture Show."

"Bat out of Hell III"'s opening song strays from Meat Loaf's normal style into a more typical "rock" genre, but is equally powerful as his previous works. The song's lyrics, particularly the metaphor of "the monster's loose/ now you know the truth/ tell me can you feel it," are reminiscent of his previous works.

Pairing up with Norwegian M2M singer Marion Raven in the later track "It's All Coming Back to Me Now," which recreates the romance and desire of the 1977 song "Paradise by the Dashboard Lights." The duet's almost operatic voices meld together as they recall the intensity of a past romance by singing "there were things I'd never do again/ but then they'd always seemed so right."

One of the CD's most powerful tracks is "In the Land of the Pig the Butcher is King," where Meat Loaf dominates the song with his pronounced vocals. Strengthened further by the background music led by guitarist Steve Vai and drummer Kenny Aronoff, Jim Steinman's lyrics possess the core of the song's power. Phrases like "Can you hear the choir now/ listen to the animals sing" juxtaposes the peace of religion with the chaos of violence.

Elena Casal's "Monstro" diversifies the album further by combining rock with Latin prayers, followed by the track "Alive." With the epic one-liners of his works, "Alive" feels the strongest of the first two "Bat out of Hell" albums. Numerous references to famous singers permeate the track, such as the Johnny Cash allusion with "You better walk the line/ or you'll end up dead."

Even though Meat Loaf is almost 60, the final tracks, "Seize the Night," "The Future Ain't What it Used to be" and "Cry to Heavens," feel fresh from his popularity in the 80s. These other half dozen tracks are less memorable in their lyrics, but the band playing the background music makes up for this lack in intensity.