Battle of the burritos: Chipotle vs. Qdoba

Not just a showdown, but a chowdown 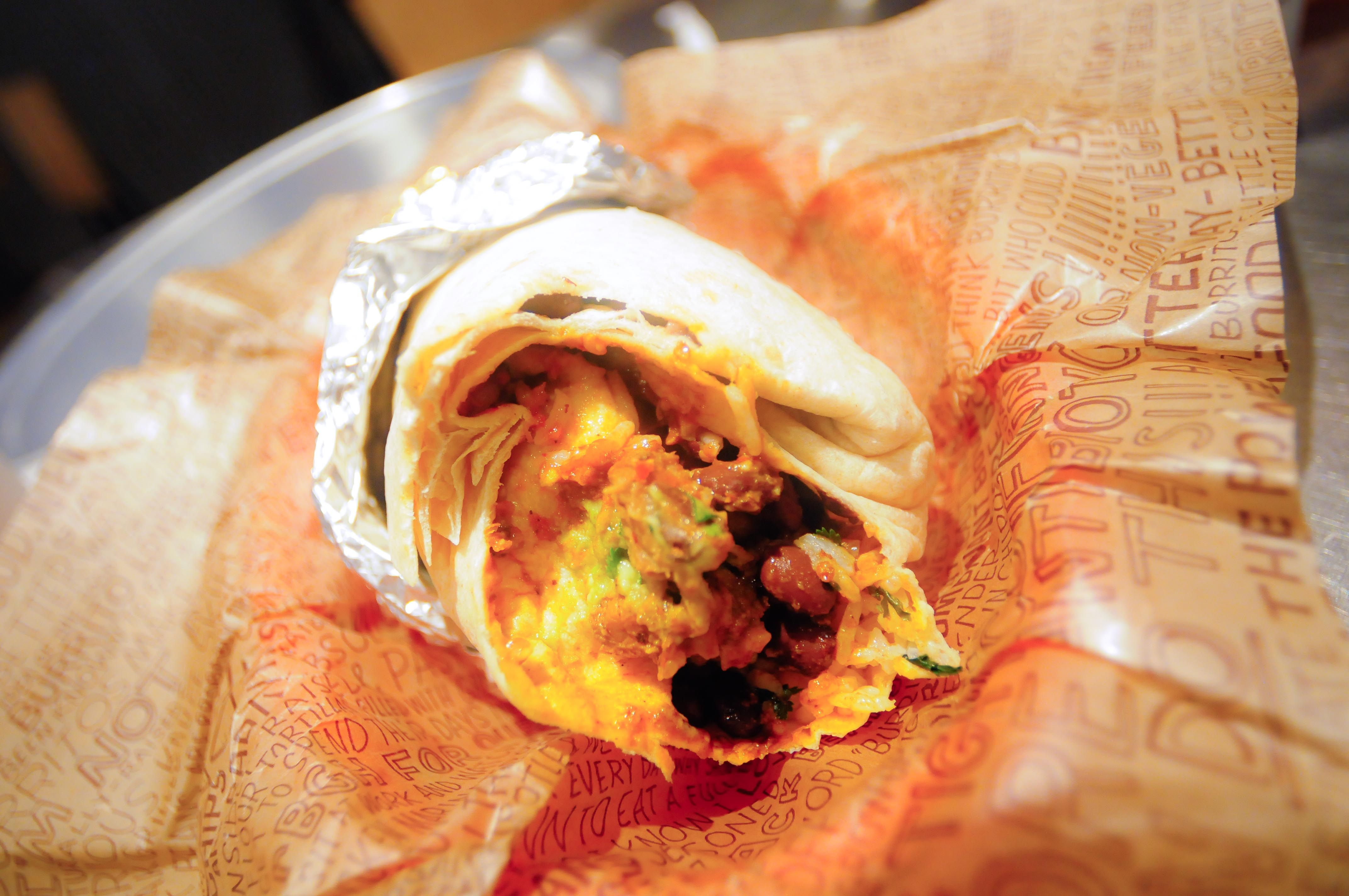 Photo:
The enormous, overstuffed burrito is a delicacy revered by all Blazerkind; the softly tortilla-wrapped bundle of joy possesses the power to satisfy both the stomach and the soul. It appeals to the carnivorous and the vegetarian, the old and young, the adventurous and tentative alike. Naturally, many Blazers (or at least, this reporter) find themselves heading to Downtown Silver Spring afterschool to feast upon these football-sized packs of deliciousness.

BUT WAIT. On every burrito run, a decision must be made. Should one to go to Qdoba, located directly down from Blair on Colesville, or Chipotle Mexican Grill, snuggled in the heart of Ellsworth Drive? Some are indifferent and simply go to whichever stop is more convenient, whereas others are strictly faithful to just one restaurant.

This reporter embarked on a quest to determine: a) whether there really is a significant difference between these two restaurants, and b) whether one is actually superior. After days of corn stuck in teeth, guacamole-stains on clothing and mild-to-extreme food comas, this reporter delivers the SCOfficial verdict on the best burrito joint.

Taste
Winner: Chipotle
What likely sets Chipotle and Qdoba so far above their less spectacular cousins (*cough*TacoBell*cough*) is the actual freshness of their ingredients. Patrons can see and choose exactly what goes into their burrito, so there's never a mystery as to what one is eating. 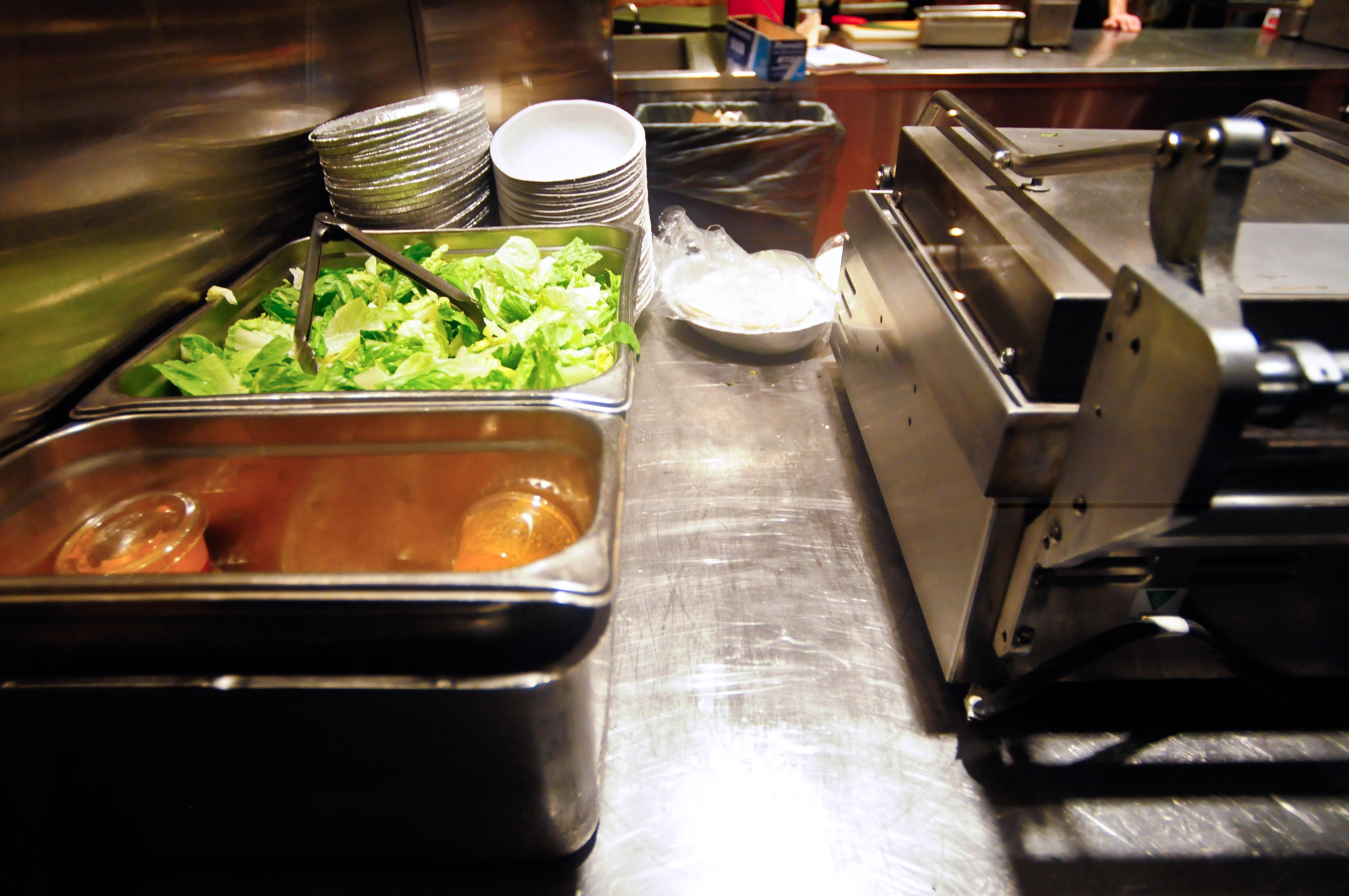 Photo: Both Qdoba and Chipotle offer fresh ingredients in their burritos, which are made right in front of you.

Photo: Both Qdoba and Chipotle offer fresh ingredients in their burritos, which are made right in front of you.

There were two key deciding factors here, the first being the meat. Having sampled chicken burritos at both restaurants, this reporter found that while both places sliced and cooked the meat on the spot, the chicken at Chipotle was far more jucy and tender. Was this an isolated incident? Perhaps. But when this reporter stole bites of her unsuspecting friends' steak and carnitas burritos, Chipotle's superiority in the meat department was confirmed.

The second deciding factor was not in fact the ingredients, but the preparation. With the way Chipotle employees place ingredients and wrap the burrito, the contents become mixed to provide for a full blast of flavor in each bite. At Qdoba, however, the ingredients remain separated within the tortilla, fragmenting the different tastes and leaving parts of the burrito that are drier.

Of course, opening the burrito to mix the ingredients yourself is not an option, as wrapping them back up is a skill not held by the average human. Thus, Chipotle wins in best taste.

Variety
Winner: Qdoba
There is really no debate here - a simple glance at the menu settles it. Chipotle does burritos, tacos, tortilla-less burritos as well as some chips and guac. Qdoba hits all those bases and more - including breakfast. 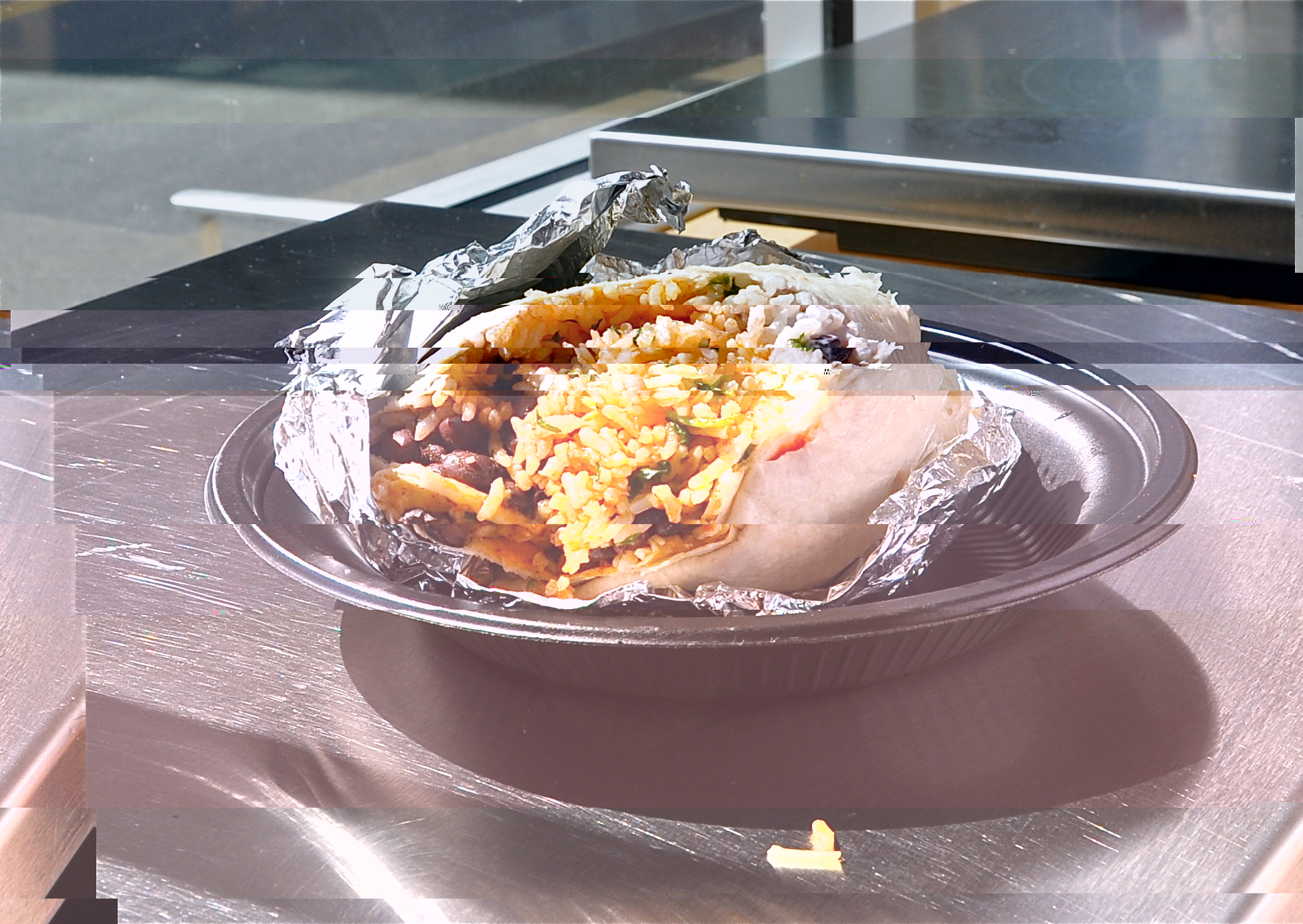 Photo: This burrito is only one of many things you can order at Qdoba.

Photo: This burrito is only one of many things you can order at Qdoba.

Aside from the typical burritos, Qdoba offers somewhat intimidating yet intriguing signature flavors such as Mexican Gumbo and Poblano Pesto. Their equivalent of Chipotle's Burrito Bowl, the Naked Burrito, can also be served in a crunchy tortilla bowl. However, it was really two things of a guilty-pleasure nature on the Qdoba menu won this reporter over: queso and nachos. Granted, these are neither the healthiest nor best foods in the world, but they're there. And that's what matters.

Value
Winner: Qdoba
This is another area in which Chipotle falls short, even if only by a bit. A burrito at each restaurant ranges from $6-9, but the average burrito at Qdoba, excluding all extras, usually works out to be a dollar cheaper than at Chipotle. But as a student these days knows, one dollar is nothing to waste.

In fact, the presentation of one's student I.D. at Qdoba leads to a half-price deal on Mondays, as well as a free drink any day of the week! That kind of discount is always worth it, regardless of the kind or quality of food.

Vibe
Winner: Chipotle
For food supposedly so similar, the two restaurants differ heavily in atmosphere. Qdoba restaurants has a warm feel, with walls colored in bright yellows and greens. Plenty of light always streams in from the windows and upbeat music plays in the background. 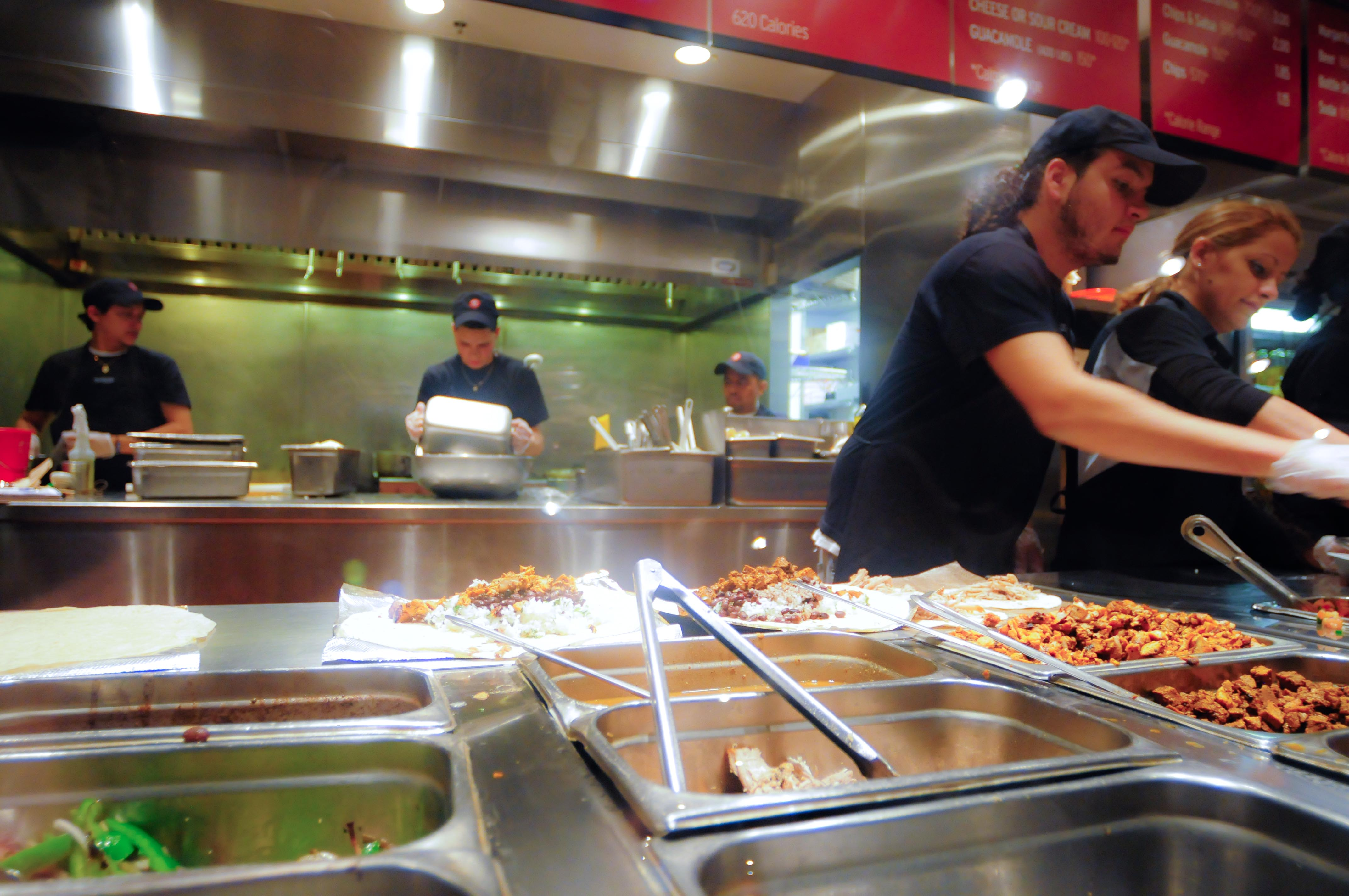 Photo: Chipotle's darker and sleeker appearance appeals to many.

Photo: Chipotle's darker and sleeker appearance appeals to many.

Chipotle goes in a different direction with a more edgy look. The aluminum-like chairs, tables and wall panels have a very industrial feel. That plus the dim lighting and eclectic "burrito art” on the walls contribute to an overall more modern and chic environment. Also, Chipotle now serves their food wrapped in gold foil. Why do they do it? Who cares? It's far more glamorous than silver.

It is hard to declare a winner in this category, as it really comes down to personal preference. However, here at SCO we tend to gravitate toward things that exude "cool" as to make up for our own lack of it because we generally go for things that hit close to home. So, Chipotle really takes the "gold" here.

Overall
Winner: Chipotle
Before Qdoba fans prepare for attack, do take the following into account. 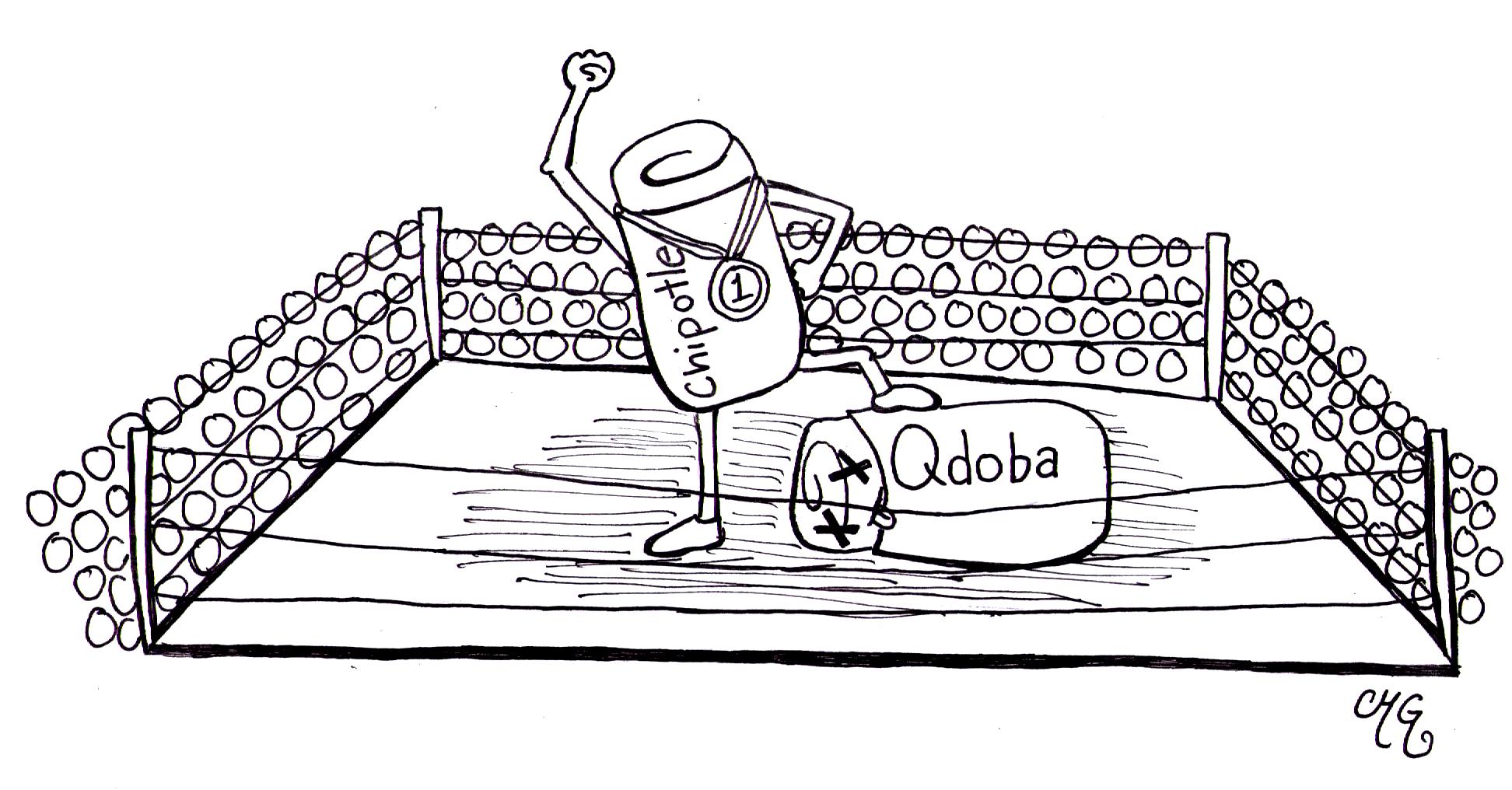 Photo:
In the quantity of options, Chipotle does not offer as much as Qdoba. But for what Chipotle does do, they do it better and it is in that sense that they offer much more. This reporter believes that if one is to consume something equal in mass to their own head, it had best be good quality, and paying a little extra for that shouldn't hurt.

Still, Qdoba remains a formidable runner-up (after all, they have nachos). This investigation may sway some to Chipotle and leave others firm followers of Qdoba. But in times of true hunger, where one goes is secondary - as long as they believe in the bulging burrito, little can go wrong.