Everything from the graphics to the different game modes all the way down to simple combat maneuvers have been improved, taking all of the good qualities of the original "Battlefront" and amplifying them. And do not forget the best addition — playable Jedi.

The Battlefront series serves as a continuation of the Star Wars storyline during either the Clone Wars in the time of the young Anakin or the Galactic Civil War in the time of Darth Vader. The factor that distinguishes this series from all other Star Wars games and makes the duo the best-selling Star Wars series of all time is that the characters are ordinary troopers on the war's frontlines. This unique perspective on battle immerses the player in the chaos and adrenaline of a Star Wars Battle. Blaster bolts and grenades fly fast and thick while both sides strategically jockey for control of Command Post beacons. 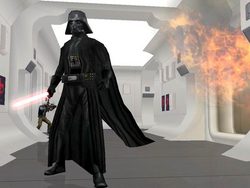 Photo:
One new feature in "Battlefront II" is playable hero characters, which are either Jedi or other notable characters such as Chewbacca or Boba Fett. When this feature was announced by "Battlefront" developers, LucasArts and Pandemic, it received mixed reactions from gamers. Most welcomed it and could not wait to see what kind of destruction heroes could wreak on the battlefield, but others said it would detract from the soldier mentality of the game. The developers did an outstanding job balancing these two opinions by adding a hero character while limiting its capabilities somewhat with a time and health limit, unlike in the original "Battlefront" where the Jedi, which sometimes joined the battle as computer players, were invulnerable.

In most situations, heroes must be either earned, as judged by the new in-game point system, or purchased prior to the battle, such as when playing the revamped Galactic Conquest mode. Heroes are deadly weapons in the hands of an experienced player, capable of turning the tide of battle within a short amount of time. While these new super-characters are probably the most exciting additions in the eyes of gamers, they are by no means the only changes made in the sequel.

First off, new classes of soldiers have been made available to every army. These range from Bothan Spies to Space Marines to Clone Commanders and carry a host of new weapons, including rockets, incinerators, cloaking devices and chain guns. Weapons combinations have been tweaked in some classes and the ineffective concussion grenade has been eliminated in favor of an improved incendiary grenade. Grenades now explode upon contacting an enemy unit and sometimes stick if thrown in the right place.

Sixteen new battlefields have been added in addition to space arenas above certain planets, ranging from the Rebel spacecraft the Tantive IV to Mustafar, the setting of Obi-Wan and Anakin's fight in the final minutes of Episode III. Unfortunately, some of the levels have been darkened significantly. This makes it nearly impossible to see in some cases. Additionally, some maps, such as Bespin Platforms, are excluded in the sequel. 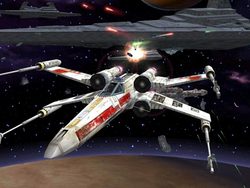 Photo:
The sequel also boasts improved multiplayer action, featuring the same split-screen option but also offering online play with up to 24 human players on PS2 and a minimum of 32 for Xbox and computer through an Ethernet card. Players can test their skills against other people across the country and go far beyond the limitations of fighting computers or just one friend.

Computers offer several additional features aside from allowing more human participants in multiplayer mode, including more accurate targeting with use of the mouse and an XL game mode. XL mode is available on some of the bigger maps, such as Kashyyyk and Hoth, and allows many times more troops to be on the battle field at once, turning an ordinary map into a thrillingly chaotic war zone.

Space battles are another superb addition to "Battlefront II." Each side starts out with a capitol ship where pilots and marines spawn from and either man turrets or take command of ships ranging from Y-wing bombers to the Droid Star Fighter. The first faction to reach 180 points, which can be accrued by downing enemy spacecraft or taking out critical components of their capitol ship, comes away victorious.

However contradictory it might seem, the truly significant difference between "Battlefront II" and the original are the small things. This includes everything from the layout of health, ammo and new energy meters to the redesigned crosshairs. The amount of damage each weapon does has been tweaked and a sprint option has been added. While these seem like inconsequential details, in actuality they significantly alter the game play.

Even an expert in the original "Battlefront" will likely perform very poorly in the first few rounds. While these initial failures may be discouraging, the reward comes when the player adapts to the game and realizes the vast advantages it has to offer. Ultimately, this new environment of heightened challenge is what makes "Battlefront II" just as appealing as the original.

The list of additions to and improvements over the first "Battlefront" could easily go on for several more paragraphs, but the best way to discover these changes is to explore them firsthand. Whether experienced through the eyes of the Jedi or the optical sensors of a droid, "Battlefront II" is a smashing success that takes the Battlefront series and every Star Wars game to an entirely new level.