Obama agrees: it's time for college football to incorporate playoffs

It might be forever remembered as Obama's first agenda item. "I think that it is about time that we have playoffs in college football," the President-elect said on the eve of his historic election. "I am fed up with these computer rankings and this, that and the other. Get eight teams…get a playoff, decide on a national champion."

Although Obama will become one of the most powerful men in the world in January, he may still lack the leverage to bring about such a change, because he is challenging the Bowl Championship Series (BCS) commissioners' ad hoc system of deciding a national collegiate football champion.

The BCS rankings, which notoriously have a thing for controversy, determine all the major postseason bowl game match-ups. As the BCS system completes its first decade of reign, Obama joins dozens of other critics who believe a playoff system should be implemented. 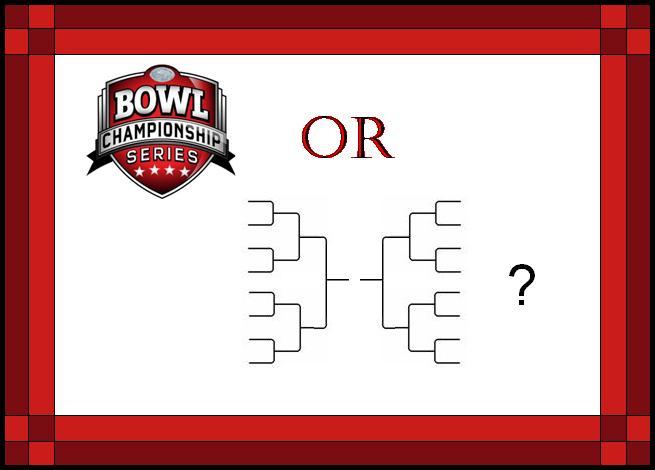 Photo:
The mere existence of a system that replaces traditional head-to-head competition (i.e. playoffs) in determining the championship game match-up is troubling. Penn State coach Joe Paterno, for one, hopes it will disappear. "I don't want to do anything to encourage it," he said back in 2002. "I think it's been a disaster."

If you don't trust JoePa - who, if you don't know, has more wins against teams currently in Division I-A, more bowl game wins and more Division I-A undefeated seasons than any other coach - then maybe you need to look at how the BCS system has worked so far.

The BCS started in 1998 as a complex way of choosing the two best teams for a single title game. The system incorporates three parts: the USA Today Coaches Poll, Harris Interactive College Football Poll and six computer rankings, which include everything from the difficulty of a team's schedule to where games were played and what the score was. On that basis, two teams are selected to play in an early-January bowl game that is the collegiate equivalent of the Super Bowl, but without the preceding playoffs. Here's a look at what's been happening:

2000: Undefeated Oklahoma has No. 1 locked, no question. No. 2? It was narrowed down to Miami and Florida State, both 10-1. The decision shouldn't have been hard, however. Miami beat the Seminoles during the regular season. Miami was higher in the polls. But the BCS computers spat out FSU as the worthier of the two. Florida State put up a whopping two points against Oklahoma in the championship.

2001: Again, the No. 2 spot was the subject of debate as three teams vied for a chance against Miami for the championship. Nebraska and Oregon each had one loss, and the two-loss Colorado team was in contention because of a 62-36 whupping of Nebraska. Given that loss and Oregon's higher human poll ranking, the Cornhuskers clearly weren't the logical choice. Yet they got the nod. The Hurricanes blew away Nebraska by over three touchdowns.

2003: Out of three one-loss teams, the BCS had to choose two. How credible was it then, to leave out Southern California - who was at the top of the newspaper polls - and choose instead Oklahoma, who finished their season with a 28-point embarrassment of a loss? 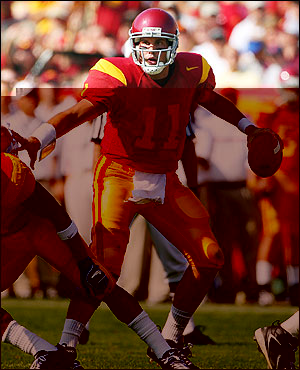 Photo: Many feel that USC Quarterback Matt Leinart and his Trojans were unfairly denied a chance at the 2003-04 title game by the BCS after finishing #1 in the AP Poll. Photo courtesy of Sports Illustrated

Photo: Many feel that USC Quarterback Matt Leinart and his Trojans were unfairly denied a chance at the 2003-04 title game by the BCS after finishing #1 in the AP Poll. Photo courtesy of Sports Illustrated

2004: Five teams finished the regular season undefeated, meaning that three perfect teams were eliminated from contention by mere calculations. How fair is that? Let them play it out.

Fortunately, there is a solution to this mess. A system where the teams themselves - not some convoluted mathematical equation - determine who should be playing for the big trophy. Let several of the top teams play off to decide a winner. Sound familiar? It should. Every other sport uses it.

Why playoffs haven't been implemented already is a question in itself. Perhaps there is merit in former Washington State coach Bill Doba's concern that extra time away from their studies would be a disservice to the players. Or maybe the kids wouldn't be able to handle the extra physical toll?

Hardly. The players deal with road trips and long practices all season. A few extra weeks will make little difference. If the claim is that the players can't stand any more weeks of hard-hitting football, then how we can support their abduction into the NFL, whose regular season alone is a month longer?

In face of these arguments, BCS loyalists often resort to their favorite - and increasingly cliche - defense: "We have the most exciting regular season of all sports." No - what is in place is a system that severely punishes teams for losing just one or two games.

Yes, a playoff system makes the traditional bowl games messy. But with tweaking, it will work seamlessly and with fewer controversies. For starters, we don't have to get rid of BCS rankings completely, nor the bowls. In a 16-team system, the top BCS-ranked team from each of the 11 conferences will earn a spot. The remaining at-large spots can be divvied out to the highest ranked teams not yet included.

Fifteen games would be necessary to crown a champion and each game could still be labeled as a bowl game, thus preserving the revenue to get distributed to the conferences. The semi-finals would plausibly be the Orange, Sugar, Rose and Fiesta Bowls. Yes, the winner and runner-up teams will get the opportunity to play in four bowl games, but that's the way it goes - to the victors go the spoils.

The playoff system will work for everybody. Controversy addicts can stomp and shout about how No. 17 was cheated. Teams can avoid the exhausting long break between the end of season and their bowl game. Fans will get more games, and schools will get more attendance revenue. The games themselves will be tighter as the playoffs advance, but most of all the last team left standing will deserve the title.

Even if you don't care about the controversial and often blatantly wrong rankings computed by the BCS, you should still advocate for the addition of a playoff system for one last simple reason - the guilty pleasure one of the BCS co-founders seems to get out of the chaos BCS rankings ensue. "I think we might have saved the jobs of some talk show hosts," Southeastern Conference Commissioner Roy Kramer said to USA Today, attempting a joke. What football fan would prefer talk show hosts to a great game?