Blair players bring a tale as old as time to light

For every little girl who ever watched Disney's "Beauty and the Beast" and promptly dragged her mother to the Disney Store in search of a yellow sparkling dress identical to that of her princess idol, reliving the beloved childhood classic on stage years later is a dream come true. Too much pressure for a high school production? Apparently not for directors Kelly O'Connor and Miriam Plotinsky who captained the Blair production of the stage adaptation of Disney's "Beauty and the Beast." Opening with an attendance-office blowing sold-out show, the cast and crew gave the audience a true happily ever after. 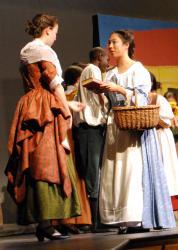 Photo: Belle (senior Mindy Or) borrows a book from the librarian in the opening scene of the play.

Belle (senior Mindy Or) borrows a book from the librarian in the opening scene of the play. Photo courtesy of Molly Brune.

We know the story well. Young and beautiful Belle (senior Mindy Or), is a headstrong, articulate girl who finds solace from the taunts of her peers through reading books. Though many are skeptical of her demeanor and intelligence, she catches the unwanted fancy of the vain heartthrob Gaston (senior Malcom Foley), who seeks her belligerent hand in marriage. Belle's heart and devotion, however, lies with her elderly father, Maurice (junior Daniel Woolson). But when he ends up at a mysterious castle off the beaten track on the way to an invention fair, he is captured by a hideous Beast (senior Chistoff Visscher). The beast himself is a prisoner in his own home and the body of a monster until he can learn to love another and be loved in return, despite appearances, before the last petal falls off of a single rose. In return for her father's freedom, Belle hands herself over to the Beast, and is sentenced to be his captive forever.

In the castle, servants turned into inanimate household objects by the Beast's curse are hopeful that Belle is the one destined to fall in love with the Beast and break the curse on their transforming exteriors. After a rocky start with Belle and Beast's clashing personalities, the pair begin to develop a friendship that goes beyond outer beauty, and may, in fact, save them both.

Old and new faces and voices grace the Blair stage in this production. For her first and last Blair musical, Or's pure soprano captivated the audience from beginning to end, and her strong acting throughout paired with Visscher's kept the show engaging. Visscher gave an inspired performance, capturing the aggressive fury of the beast through his acting, as well as his characters' vulnerable sensitivity in solos such as "How Long Must This Go On?" and "If I Can't Love Her."

Though spectacular, the leads were complimented by several strong supporting performances, such as senior Francesca Blume, as the hospitable and cheery Mrs. Potts. Blume's rendition of "Beauty and the Beast" was reminiscent of the beloved Disney cartoon version. Junior Russell Ottalini, as Lumiere, and sophomore Annie Milligan, as Babette, added energy and sensual comedic relief, and really must be recognized for maintaining French accents throughout the show. 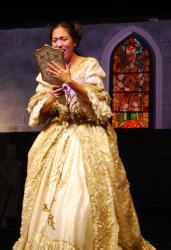 Photo: Belle remembers how much she misses her father after Beast lets her look through his enchanted mirror.

Belle remembers how much she misses her father after Beast lets her look through his enchanted mirror. Photo courtesy of Molly Brune.

Pulling off large scale numbers such as "Be Our Guest" must really be attributed to each member of the cast. This show-stopper showcased the vast talent on stage, featuring tap and jazz dancers. Decked out as utensils, the chorus executed impressive choreography in unison and radiated the energy that many crave and expect from this number. "Gaston," another highly anticipated number, did not fail to deliver and was greeted with laughter and enthusiasm from the audience. Foley and senior Zack Pinsky, who played his right-hand-man, Lefou, made for a hysterical pair, with over-the-top exaggeration, and pristine execution of Gaston's pompous nature and Lefou's jittery admiration. The number was also an impressive dance piece, as tavern patrons broke out in a bouncy medley of jigs, square dancing, and polka. In addition to dancing utensils and bar-goers, balletic wolves also made eerie appearances in the woods.

These musical numbers, though visually amazing, would be nothing without the reliable performance of Blair's pit orchestra. Directed by Dustin Doyle, the pit played with such ease, revealing extensive rehearsal, that one can assume that these musicians also dig Disney tunes.

Despite a few minor technical malfunctions, the stage crew really outdid itself this year with set and light design and special effects which merited audible "oohs and awes" from the dazzled crowd. Each of the various settings, from the interior of the castle, to the woods, to the village street, were each impressively and accurately represented. The castle, complete with two flights of stairs and stained glass windows, was the site for the seamless and mystifying transformations from man to beast and beast to man at the beginning and end of the production. 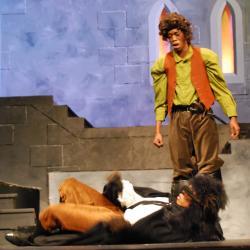 Photo: Gaston fights Beast for Belle in the climax of the play.

Gaston fights Beast for Belle in the climax of the play. Photo courtesy of Molly Brune.

Not only did the background look terrific, but so did each and every actor. Whether sporting an oversized teacup or a life-size dresser-drawer, the costumes made the show (and inanimate objects) come to life. Visscher too, who donned a beastly mask and extra dark, matted hair extensions, looked particularly vicious, with hairy paws and a tail to boot. And of course, there was Belle, who appeared in one gorgeous gown after another– enough to make even a high school student yearn to break into the costume closet for a prom dress for one manic moment.

Though the cast performed the Disney adaptation of the musical, true to form, O'Connor managed to throw in dramatic symbolism, most notably by representing the rose as ballet dancer junior Laura Boyer. Even though connections to modern times are few and far between, watch out for a guest appearance of the "bend and snap," bound to catch your eye even if it couldn't catch Gaston's.

Taking on a beloved, wide-scale production such as "Beauty and the Beast" may have been a risk, but it was one worth taking. This year, be Blair's guest to a musical which is bound to be beautiful start to finish, in the eye of any beholder.