Beaching with the Boss

Teachers recall memories of Gainous outside the walls of Blair

Think beach week is a time to get away from school? Think again; you may just end up sharing a beach umbrella with Mr. Gainous.

While Blazers kicked back with their friends from school on summer days, 30 teachers and staff members relaxed with the big man himself. Each summer, Principal Phillip Gainous took the Instructional Leadership Team – comprising of faculty members who lead a Blair program or department – to his beach house in Wicomico Church, VA.

During these meetings designed to rejuvenate staff unity, Gainous lead the faculty in team – building activities, which translates to their work at Blair. Vickie Adamson, director of the English Department says, "We could sit at school and have a meeting, but instead he likes to mix it up with group collaboration and fun relationship – building activities. It's all part of his philosophy of mixing work and play to create a final product." 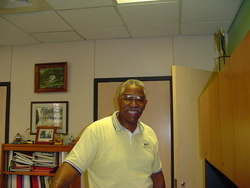 Photo: A surprise shot of Mr. Gainous in the summer before heading off to the beach with the ILT.

Photo: A surprise shot of Mr. Gainous in the summer before heading off to the beach with the ILT.

Over the years of trips to the beach, teachers such as Adamson and Dolores D'Angelo, director of the CAP program, recall several memories which they believe exhibit Gainous's attitude toward students and his leadership style as Blair Principal.

For Adamson, one particular memory sent her heart racing and her mind drawing connections between Gainous's leadership to the students of Blair as well as her own son.

Aboard Gainous's boat (the Philicia), in summer of 2001, Adamson was talking to her husband and Gainous's wife below the deck while her 10 year old son chatted at the helm with Gainous, the captain of the ship. In the midst of the conversation, Gainous bounded down the stairs to join the adults and grabbed a cold drink from the fridge, causing Adamson to shriek, "Phil! Who is driving the boat?" Amid the state of panic, Gainous simply smiled and reassured her that after one lesson, her preteen son was well equipped to steer the 35 foot boat.

Adamson says she sees this attitude extend beyond the boat and toward students at Blair. "He believes in kids," she says. "He trusts that once they learn something, they will be okay on their own. I think he is remarkable in that way."

To D'Angelo, one particularly speedy incident is symbolic of his style of managing and training Blair staff members.

During an ILT retreat at Gainous's summer home in 2005, he and the other staff members went to a restaurant. As they were about to head home, Gainous turned to D'Angelo, who was driving another teacher's car, and told her he would take them back through a shortcut. "He said the infamous words, 'follow me,' and I knew we were in for it," she says.

No sooner had Gainous turned the key to the SUV in front of D'Angelo, that he took off down the dark, poorly marked road at top speed. D'Angelo, a stranger to the area was uncomfortable in an unfamiliar car and strained to keep up with the SUV.

Finally, they came to a fork in the road, but Gainous's car was out of sight. "We had no idea which way he had gone," she says. After finding a map, D'Angelo and the other teachers eventually found their way back to the house, where Gainous had been waiting for them.

To D'Angelo, this story stands out as particularly telling of Gainous's leadership. "He blazes a trail and expects you to follow him," she says. "He has confidence that you'll come along. Even though you may not get there the same way or as fast, you will get there."