Bushy Blazers get rough in second week of competition

Rounding into the second week of competition since six Bushy Blazers began growing beards in a Student Government Association (SGA)-sponsored challenge to support a children's charity, some have made visible progress around their chin areas while others claim to be "pacing" their facial hair growth. As contestants continue to train and trim - the latter a source of controversy - the competitive air is becoming as thick as the first-place beard.

Still, the contest is nearing its end - most likely within the next two weeks, according to SGA officials. Silver Chips Online revisited the contestants for insight into their progress and setbacks and asked each to evaluate the current status of their beards with the Beard-o-meter, a scale of one to 10 by which the contestants rated the development and strength of their beard growth. 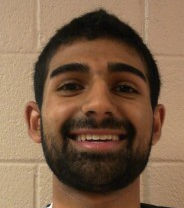 Photo:
Beard-o-meter: 10
Progress: "I think my beard is coming along. I find it pretty decent. Right now it's in a transitional stage. Everywhere I go people who see me think I am a 40-year old man. But I'm definitely going all out."
Stubble trouble: "I had to trim and clean up my beard for an interview, which probably helped the other contestants. Other guys have been talking trash, so we'll just see what happens in the end."
Personal problems: "It's starting to get uncomfortable."
Beard bashing: "Hopefully on the last day I can put some new design. I hope the other guys realize it's a beard-growing competition and not a peach fuzz contest. We like to joke about each other, but in the end it's about the fundraiser."

Photo:
Beard-o-meter: 8
Progress: "I'm pretty proud of where mine is right now. Everybody's growing great beards. I've been trying to exercise more frequently to get a robust beard.”
Stubble trouble: "I really want to grow a good beard. I just know my competitors are getting really good."
Personal problems: "I want to grow better so I'm changing up some of my habits. I'm working on a combination of getting a good sleep and eating better."
Beard bashing: "I don't know if I really have a chance. My competitors are growing exemplary beards. But I'm just really proud to be a part of this."

Photo:
Beard-o-meter: 7
Progress: "I'm doing okay. I wish my beard filled out a little more."
Stubble trouble: "I don't know if I'm growing as best as possible. I think I'm a little distracted and I need to give more effort."
Personal problems: "Lacrosse season just started and I haven't been giving enough focus to the contest. I think this contest is all about commitment. I can make real progress if I really get on it. But the beard is getting itchy."
Beard bashing: "I just want to say that Greg Vogel is cheating and should be disqualified for cleaning and cutting his beard, which is against the rules. Rutvij cut his beard a little bit for a college interview so I guess that's legit."

Photo:
Beard-o-meter: 5
Progress: "I'm happy with the thickness of my beard. Hopefully I can get hair above the chin."
Stubble trouble: "I usually get a neck beard and a side beard so I'm working on other areas."
Personal problems: "I have to stop looking at mirrors because they hinder my growth. I'm watching a lot of 'Simpsons' and no exercise. I'm also getting a lot of sleep. I put syrup on my waffles too."
Beard bashing: "Greg Vogel and I are in a group by ourselves. Rutvij is in his own league. Sam Barth is in the dust."

Photo:
Beard-o-meter: 5
Progress: "It's coming along okay. I guess I'm satisfied."
Stubble trouble: "I'm still going for coolest beard. I'm somewhere in the middle in comparison to everyone else."
Personal problems: "I haven't been shaving so I moisturize my face usually."
Beard bashing: "I know Greg Vogel has been shaving his."

Photo:
Beard-o-meter: 4
Progress: "Not too much. It's turning slightly into beard-like form. I feel I'm meeting my expectations."
Stubble trouble: "I take in all the compliments I've been receiving. I still want a more full beard."
Personal problems: "Sleeping is become an issue. Sometimes my chin hairs get pressed by the way I sleep so I'm sleeping on my stomach less."
Beard bashing: "I'm trying to avoid all the criticisms of this new hairstyle."