Sign-ups for auditions are now available

Tryouts for casting roles in "Beauty and the Beast" will be held Dec. 11 – 13 after school. The sign-up sheet for auditions is posted on the announcements bulletin board next to the chorus room in the fine arts hallway.

To audition, students are required to memorize and act out a page of a scene from the musical in a small group. They will sing and dance in private auditions in front of the three judges: co-director Kelly O'Connor, Miriam Plotinsky and chorus teacher Paul Newport.

According to O'Connor, the dance portion of the audition is not meant to be intimidating to first-time dancers. "It's really can you move in time to music," O'Connor said. "[Students] have nothing to lose by auditioning," she said. 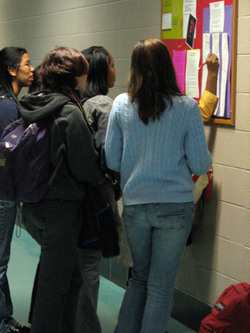 Photo: Students gather around the sign up sheet for the musical outside of the chorus room. Auditions start on December 11th.

Photo: Students gather around the sign up sheet for the musical outside of the chorus room. Auditions start on December 11th.

Auditioning students can also choose to try out for specific lead roles. "The audition is: can you create a character?" O'Connor said.

Due to the size of the show, which is comparable to that of Blair's 2005 production of "West Side Story," "Beauty and the Beast" is likely to feature 100 students, including many chorus members, according to O'Connor.

The judges will post a callback sheet - a list of students in the running for lead roles - a few days after auditions, depending on the volume of students who audition and the talent. Students who do not get called back may still get roles in the chorus.

This year, O'Connor said she would like to focus more on costume and set design with students, giving Plotinsky - who has been involved in school productions for the past three years - a bigger role in directing.

Pre-auditions, which helped interested students learn some of the dances and songs for their audition, have ended. Pre-auditioning is not required for the auditions.

The spring production was selected for its wide appeal. Another choice was "Fiddler on the Roof," which was ultimately passed over for the better-known and more student-friendly "Beauty" - which O'Connor expected would attract more student thespians. "Something that is a known quantity like 'Beauty and the Beast' will draw students," O'Connor said.

She also stressed the color-blind nature of the production auditions, and noted that in the fall's "The Comedy of Errors," several pairs of twins were played by one black student and one white student.

Sign-ups for auditioning are available outside Room 16. Contact Kelly O'Connor for additional questions.

Additional reporting by Ya Zhou