Beauty and the book

English teacher Lauren Termini was tired of listening to the women around her complain about their bodies. She became especially irritated when she had to listen to her mother and sister lament about their imperfections, and it was roughly three years ago when Termini finally decided that she was finished just listening. Instead, she started to write. It was six months after she stopped listening and started writing that Termini had a finished book.

Termini's book, titled "Rethinking Beauty," examines beauty standards in America and focuses on the reasons behind people's dissatisfaction with their bodies. "I was hearing all of these people who wanted to change things about their bodies, and I got really angry because to me these people are beautiful," she says. "I wanted to look at why this problem was so deeply engrained in all of us." Termini has spent the past year trying to become a published author, and is now promoting her book through a web site . But long before she was spreading her message on the Internet, Termini had to investigate the world of beauty. 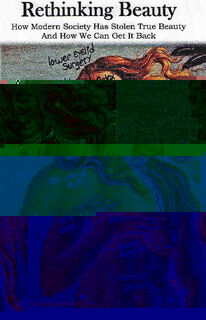 The author began research for her book by looking at what she believes to be the root of Americans' body-image issues: the media. "I started to look into the media and found that there are basically five corporations that control all of our information," she says. "Mostly men run these companies, and the motivation behind making us feel bad about ourselves all comes down to the money. The worse we feel about our looks, the more we spend on products. " After her initial research, Termini delved into topics such as beauty standards throughout history and the retouched, "flawless" images in advertisements. After scrutinizing beauty for months, "Rethinking Beauty" naturally took shape. "I basically categorized my research, and that's how my chapters were born," she says.

The rest of Termini's manuscript came easily in the span of about six months, simply because of her devotion to the topic. "It happened really fast. You have to be obsessed with your subject and love it, and because this problem personally touched my life, it was already a big part of who I am," she says. "Every free minute I had I spent writing." Though the inspiration for her book originally came from women's unhappiness with their looks, Termini made sure not to exclude any demographic in her writing. "I even wrote a chapter on the hyper-masculinity of men, how because of all these airbrushed dudes, men feel just as bad about themselves," she adds. "I wrote this for the average person, anyone of any age and any gender… there's something in there for them." 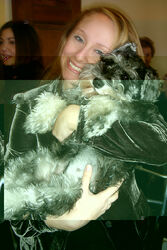 Photo: Termini finished her manuscript before she arrived at Blair, in the span of roughly six months.

Photo: Termini finished her manuscript before she arrived at Blair, in the span of roughly six months.

Though Termini had written a manuscript that she believed was relevant to the general public, she had difficulty getting it published. After pitching her book hundreds of times to multiple publishers and even hiring an agent, it was ultimately a weakened market that largely prevented her from spreading her message in print. "Because of the economy, no publishing companies are taking on new writers. They don't want to take chances, they're pretty much only publishing authors who they know will make them money," she says. Termini also had trouble getting publishing houses on board with her book because of her conceived lack of authority on the subject. "Nonfiction is hard to publish when you don't have a platform," she explains, "I don't have a degree in this or anything, publishers want to know 'who are you to write this book?'"

After a year of publishers turning her away, Termini turned to the Internet as means of expressing her ideas. "My web site is just my way of getting myself out there," she says. Termini also realized the value the Internet holds in that it offers the kind of accessibility a printed book would not have. "I'm possibly selling it as an e-book on the Internet, that's definitely cheaper and more accessible," she explains.

Though Termini penned her manuscript before she started teaching, her priorities changed when she arrived at Blair. "When I'm here, I'm focused on being the best teacher I can be," she says. But Blair's diversity offered Termini an irresistible opportunity to promote her ideas. "It's a little microcosm of the world here, it's the perfect place to show this book and talk to students," she says.

Termini got her chance to talk to students when she gave a presentation about her book and her research about beauty, and is eager to further discuss her book and her message. "I would love to do presentations anywhere and everywhere," she says. "The main thing is there is no one definition of beauty… we spend so much time and money trying to fit one mold, we could spent our time on so many better things. That message could really change our lives."