"Becoming Jane" has plenty of sensibility

The age old question: money or love? That is the question asked again and again in "Becoming Jane," a fictional film that embellishes the real-life romance between a young Jane Austen and Thomas Lefroy, later a distinguished Irish politician and judge. Although the plot fits into the typical mold of a Regency-era love story, the unexpected plot turns, witty dialogue and intense chemistry between the two leads make the film anything but clichéd and sappy. 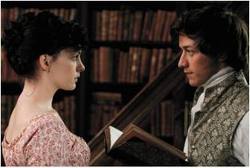 Photo: Austen and Lefroy's obvious chemistry during one of their many arguments. Photo courtesy of Miramax Films

Photo: Austen and Lefroy's obvious chemistry during one of their many arguments. Photo courtesy of Miramax Films

Based on Austen's own novels and the few known facts about her life, the film tells of the romance between Austen (Anne Hathaway) and Lefroy (James McAvoy). The year is 1795 and Austen is a spirited and rebellious woman who wants to do the unimaginable: marry for love and live by her pen. Her parents (Julie Walters and James Cromwell) have found her a rich suitor but Austen cannot grasp the idea of marrying Mr. Wisley (Laurence Fox), a man of few words and even fewer opinions. When Lefroy is sent to the countryside, he falls madly in love with Austen after an icy introduction a la Fitzwilliam Darcy and Elizabeth Bennet, numerous arguments and a hilarious scene featuring Austen's brother and Lefroy in the nude. However, reality soon sets in and Austen and Lefroy must decide if they are willing to give up their families, friends and reputations for love.

As more and more of Austen's books have been adapted into successful movies, it was inevitable that someone made a movie about the author herself. "Becoming Jane" not only chronicles the romance between Lefroy and Austen, but also shows how the affair influenced Austen while she wrote "Pride and Prejudice," one of the most beloved novels today. Writer Julian Jerrod creates dialogue that perfectly captures Austen's playful yet profound spirit by incorporating lines from Austen's own novels. The witty banter and emotional dialogue between Lefroy and Austen leave the audience emotionally drained at the end of the film.

A movie with strong screenplay still needs strong actors to do it justice, and Hathaway, McAvoy and a solid supporting cast do just that. Best known for her role as Princess Mia in "The Princess Diaries," Hathaway shows off her sensitive side and lends just the right amount of spunk and sensitivity to her character, though her English accent falls through more than once. Her electrifying chemistry with McAvoy, a relatively unknown actor until "The Last King of Scotland," would make the real Austen proud. To lighten the mood in the few scenes that are too emotion-heavy, Walters provides comic relief as the overbearing, pushy mother akin to Mrs. Bennet in "Pride and Prejudice."

Although the film is not a biopic, the ignorance of Regency-era codes of conduct is frustrating, especially for a true Austen fan. Unchaperoned walks, moonlight kisses and skinny-dipping would have been unfathomable and unthinkable in those days, yet are in abundance in "Becoming Jane." The disregard for historical accuracy in favor of pleasing Hollywood is particularly disappointing for a film where almost every minute detail, such as the proper way to hold a pen, is taken into consideration.

Becoming Jane (112 minutes) is Rated PG for brief nudity and mild language and is now playing at the AFI Silver Theatre Cultural Center and Landmark Bethesda Row Cinema. The movie will open in wide release on August 10