Blair stage crew begins this year with more members than ever before.

Bzzzzrt. Bzzzzzrt.
A wide-eyed freshman slowly lowers the gun, studying his work with a kind of tentative caution. Mildly alarmed at what he's done, he looks to the authoritative girl who's peering over his shoulder. She nods at him.

"Good job, that's better than when I first started," she tells him encouragingly. The freshman smiles slightly and continues drilling together the wooden beams with an intense focus. Broken remains of past shows litter the walls on the Blair stage-- half of a book backdrop from "Into the Woods," the ghost of an outline of painted "Tamer Tamed" scenery. A large number of students are dispersed across the stage, working with wood. Two girls are giggling and skipping around singing show tunes at the top of their lungs. In the center of it all is a short twenty-something guy with a commanding aura, calling out instructions.

This is Brandon Crabtree, the stage crew sponsor. A Blair alum, Crabtree was a part of stage crew throughout his high school career and came back after the old sponsor left. His job is to plan the set design and its logistics to make sure everything runs smoothly, but he makes sure to keep out of the students' way. "Ultimately, it's their show, for them," he says, turning to help the student on the ladder figure out exact size specifications for lights.

Crabtree has been in charge of stage crew for the past three years, but this year is different, primarily because stage crew has nearly doubled in size. Last year, stage crew had 25 members. At the end of the year, four members graduated and seven dropped out, leaving only 18 members. By the beginning of this year, however, around 40 new people had joined, all eager and ready to join stage crew, more than there have ever been. Even though a couple of students stopped coming after the first meeting, there is still an unprecedented number of crew members. 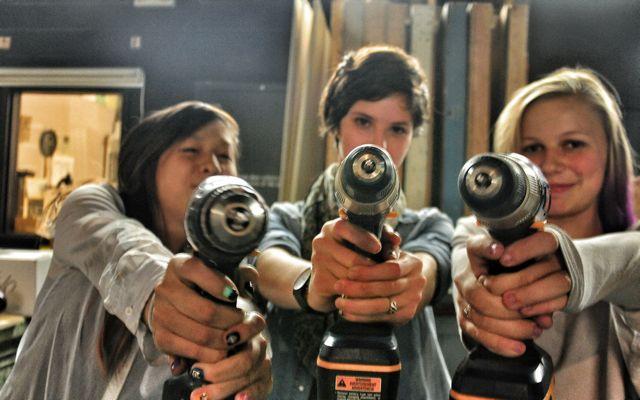 Crabtree attributed this dramatic rise in membership to an increased general awareness of the club. "There's normally not as much advertising," he says. According to Crabtree, this has been changing as of late. Senior Kenda Tucker, stage crew's president, worked with a few other members to make posters and hang them around the school. "She took the initiative," he adds.

Some freshman did indeed come because the posters brought the opportunity to their attention. Others, like freshman Max Kittner, became interested in stage crew after viewing "The Tamer Tamed” last year, taking note of its excellent props and sets. He also had a friend who did stage crew for a couple of years. Sophomore Clarissa Gideos decided to join after she took Drama last year and wanted to get involved with other aspects of the theater. "[In the class,] I got to know what's going on backstage as well as onstage," she says.

The increase in numbers has mostly been good because more manpower means more efficiency. "It makes everything go a lot faster," Crabtree says. Still, there are some problems like shortages of tools, which means that not everyone can be doing something all the time. Crabtree made sure that everyone understood that there wouldn't always be tasks to complete. "Especially this year, there'll be a lot of instances where [they]'ll be standing around with nothing much to do," he says, but he admits that for some jobs, especially bigger ones, "it's always good to have so many people available."

Tucker, who has been in stage crew for four years, notes that the increase in members doesn't take away from the great stage crew experience. "It's always been silly, sarcastic sorts of people, and now it's just more of the same," she says.

Clarisse Callahan, a senior and veteran stage crew member, explains that having more inexperienced members can make it a little bit harder to assign tasks. Students have to be trained in different, specific areas so that they know what they're doing. It can be a little difficult to remember who can do what and a little chaotic when trying to organize things. "You can't just tell people to go build something," she says.
Right now, the crew is still in its "clean-up" period, which means that they are going through old props and sets to make sure everything is squared away before they begin the set for the upcoming fall play, "A Midsummer Night's Dream.” They're currently building signs to advertise for the upcoming production out of cheap wooden beams and drill guns, and enjoying themselves immensely in the process. People are having a great time, laughing together and goofing off but still managing to get work done. "We've done a lot of work, but it's been fun," says freshman Miriam Smith, who did stage crew during middle school. 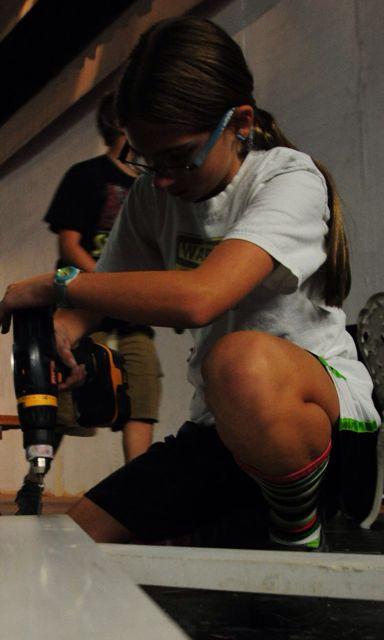 Photo: Freshman Alison Reynolds works on the frame for a sign to advertise the upcoming play.

Photo: Freshman Alison Reynolds works on the frame for a sign to advertise the upcoming play.

Soon, stage crew will begin the building of the actual set. As they get closer to the show, they'll meet more often than their current three days a week to get more done. After finishing the set, they'll do more specific crafts-work, like building the more complex black box-style theater like they had last year during "Tamer Tamed." "That is when the bulk of the work occurs," Crabtree says. Everyone works on building, and, as the opening of the show nears, those who want to can learn how to operate technical equipment like lighting and sounds.

No matter how many people are there, stage crew's main goal is to help put on a show. They're responsible for a huge portion of any play, and completely essential to a play's smooth execution.

It's been about an hour, and the wooden beams are coming along. In one corner, a laughing group of freshman girls are trying to find the source of a mysterious cricket noise. Students go in and out of the storage room, some carrying pieces of wood that are ridiculously not proportional to their size. Everyone has something to do and they're doing it, working to make this show truly unforgettable.