Behind the scenes of Blair

Your backstage pass to the school

Every time a Blazer turns on a school computer, the Blair log in-screen pops up. Every day at 9:08 a.m., InfoFlow airs on all of the school's television screens. During every school play, a collection of 24 lights illuminate the stage. But where are the rooms and places that make these things happen? Chips has the answers for you. 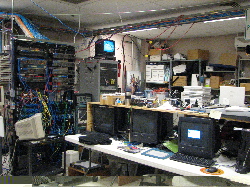 Photo:
At the back of the media center, nestled between two carts loaded with boxes of computer keyboards, is the entrance to the "HeadIn" room, where all of the wires for Blair's Internet, cable and phone "head in." Walking into this place is like walking onto the set of a science fiction movie – a dull hum fills the air, rainbow wires crisscross the ceiling and a collection of witty signs ("HeadIn Parking Only" and "If it sucks, throw it out" – a jab at the room's clutter – among others) adorn the walls. Large shelves hold a myriad of computer parts, from chips to drives to monitors, and then there are the computers themselves – over 15 functional ones crowding the long the tables and desks that line the room.

The HeadIn room is run by Tim Hall and Anne Wisinewski – appropriately dubbed "Ms. Wiz" – both Information Technology Support Specialists. Aided by four student volunteers, Hall and Wisinewski work to make sure that the Blair network runs smoothly every day. According to junior Seth Reeker, one of the student volunteers, Hall and Wisinewski make sure that software is updated and security patches are installed. Hall also "reads up on newly discovered security holes to see if the issue affects our network [and] scans accounts for files that violate the MCPS rules," Reeker says. 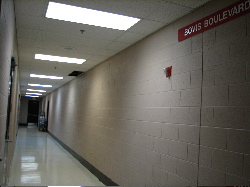 Photo:
Upon exiting the Media Center and walking down Blair Boulevard, it's easy to miss the door leading to Bovis Boulevard. Aside from a few other classrooms, Bovis Boulevard houses the Blair Network Communications (BNC) hallway, which might be best known by students for producing InfoFlow, Blair's morning announcements, among other self-produced shows.

Inside the BNC hallway, the lilac walls juxtapose with the pale yellow insides of the television editing suites. BNC has five of these suites, one for InfoFlow and four others for videographers to edit shows. Other rooms include the radio studio – where radio programs are created, engineering suite and producer's suite. At the center of the "catacombs" are the two studios, A and B, where BNC's three shows – "Face the Music," "Double Overtime" and "Shades of Life" are taped. Like Studio B, Studio A – which is used more often – has a real set with two couches, a teleprompter and a camera. The set is next to a glassed-in control panel, where the producer sits and the rest of the staff works during filming.

InfoFlow, on the other hand, is taped on location at Blair. This year, it is being produced under the direction of coordinating producer junior Ariel La. Under La are five other producers each in charge of taping one segment of the show every week. Though the show's segments last only five minutes at the most, each show takes much longer to produce, four hours, according to La. "We all sold our souls and gave [them] to InfoFlow," she says. "Nobody really understands how much work we put into the show." 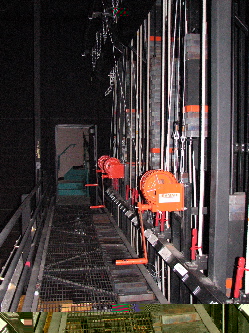 Places at Blair- the Fly

Photo:
During school events in the auditorium, much work goes on behind-the-scenes, or, in this case, above the scenes. At the very top of the auditorium, 27 feet above the seats, is the catwalk, a platform that stretches from one wall to another. According to stage crew member Stevia Morawski, the catwalk is where members of the stage crew operate spotlights, videotape and create special effects during school productions. "Last year, during 'Twelfth Night,' [the show needed] lightning," she says. "To make that effect, we had someone stand up on the catwalk and take pictures to make the camera flash for the lightning effect."

Depending on the kind of work needed to enhance the show, a couple of stage crew members venture across the catwalk during the production. The catwalk can be accessed from both sides of the stage. On one side, you can opt to climb a short staircase that goes to a metal ladder with green rungs, eventually leading to the platform. On the other side, an ominous ladder (next to a strategically-placed outline of a dead body on the floor) leads to the same catwalk. The catwalk is, in and of itself, a down-right scary place to be. The floor is made of black, crisscrossing metal and is only separated from the expansive auditorium by a low, metal grate. An impressive collection of more than 24 stage lights hang from the side accompanied by the large singular spotlight, always ready to shine. 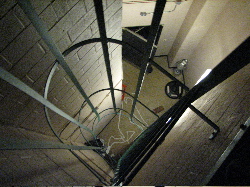 Photo:
In addition to the catwalk, the stage crew also makes use of "the booth" – a small booth where up to five members sit and control the show, and "the fly" a platform above the stage that controls the curtains and backdrops. Using the catwalk, booth and fly, stage crew members work backstage during school productions to ensure that the show goes on.

And in the end, the show must go on – whether in the HeadIn room, the BNC studio or backstage, unseen Blazers and staff members work to make sure that Blair runs smoothly every day.