Behind the scenes of free school meals

With three free meals a day, there are more meals to be served and more work for cafeteria staff

As the sun rises, Blazers push open the door of the SAC and make a sharp left turn into the tiled floors of the cafeteria. They filter through the line marked by iron railings, grab a bottle of orange juice and a bagel, and pass through the register to sit down on the circular red tables that surround the SAC to eat breakfast.

A few hours later, the hallways once again fill with a cacophony of voices, as Blazers jostle each other to reach the lunch line. They take a paper tray and load it with the meal of their choice, a spicy chicken patty burger, cheese crunchers, macaroni and cheese, chicken drumstick, pizza or otherwise, to eat lunch on the Blair campus. At the end of the school day, Blazers, with some heading towards their bus and others on their way home, file through the one remaining line of the cafeteria to pick up food to eat on their way home. 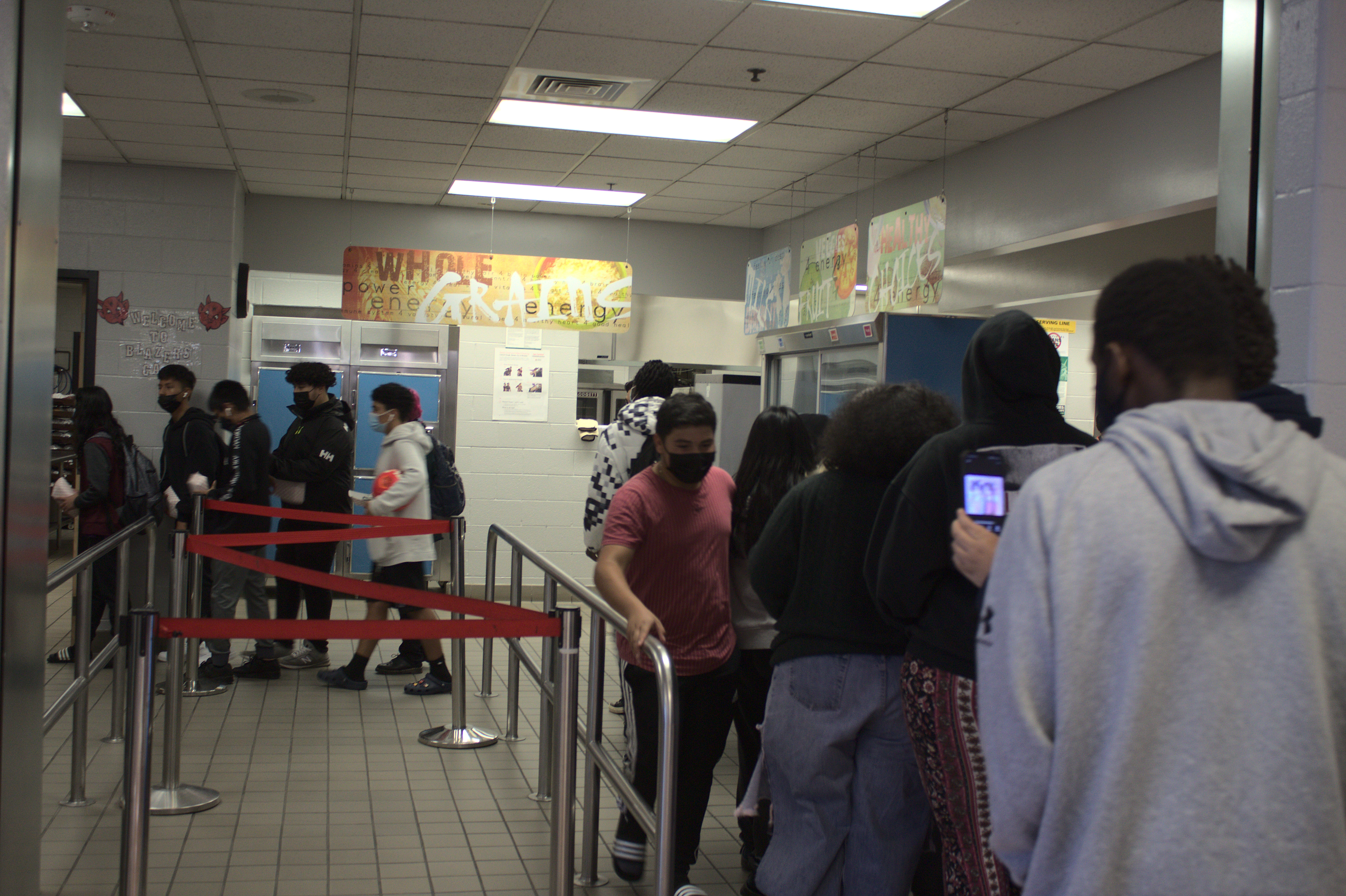 Photo: Blazers line up in the cafeteria to receive their lunch.

Photo: Blazers line up in the cafeteria to receive their lunch. Photo courtesy of Mollie Block.

Earlier in the year, MCPS announced that it would provide free meals for all students, following the United States Department of Agriculture (USDA) decision in April. "The USDA has granted waivers for meal service for this school year. These waivers allow all students to receive the meals at no charge, regardless of free or reduced-priced status. MCPS will offer breakfast, lunch, snack, and supper on all instructional school days. The waivers also allow snack and supper to be taken home for consumption," MCPS states.

With MCPS' new policy, more students than ever travel the path from one end of the lunch counter to the other, whether that be in the second-floor kiosk or the three lines on the first floor.

Freshman Christopher Blanco is one such student who has taken advantage of the now free meals provided by the school. "Before the pandemic, I hadn't been getting school lunches, [but now] it's much more convenient," Blanco says.

Christine Blanton, Blair's cafeteria manager, emphasizes the extreme increase in the number of students eating school meals, more than double that of before on usual occasions. "Before the pandemic, we were serving 750 meals [per day]. But since they went to everybody eating [for] free, every day, it increases," Blanton says. On any given day, the cafeteria serves over 1500 meals in total for Blazers.

At first, one might assume that more consumption leads to more waste. However, this is not the case. Blanton firmly establishes that since the implementation of the new policy this school year, the cafeteria has never had left-overs. "No, there's no food leftover. Never. That's a good thing. We used to have food leftover before the pandemic, but since this program started, there's nothing like that," Blanton says.

In previous years, Blazers would often take and eat some of the surplus from lunch as they leave the school. But this year, with the addition of supper and with no leftovers, the cafeteria goes straight towards preparing for supper after lunch, allowing Blazers to pick up supper instead as they go home.

Not only does the addition of free meals lead to an increase in the number of students eating from the school, but it also directly affects the operations of the cafeteria. It adds to the workload of the cafeteria workers by making their job more time-consuming.

The cafeteria staff’s job begins when the delivery truck comes in at 6:00 a.m. twice a week every Tuesday and Thursday to deliver food to the cafeteria, filling the cafeteria with boxes upon boxes of food.

Throughout the three-hour process of storing the incoming food, Blanton and the other cafeteria workers have to set up for the day and make sure that the Blazers coming in for breakfast receive their food.

Blanton describes the tremendous amount of work needed to just make sure all the food is stored away properly in the various storage rooms hidden behind the lunch counter. "Well, it's just the two of us doing it . . . It takes us three hours to put all the food from the freezer to the refrigerator to the storage room because everything has to be in order and has to be put away organized, " Blanton says.

All the different meals that come to the school have to be stored in one of three storage rooms that line the sidewall of the cafeteria: the freezer, refrigerator or storage room. Each room is filled with towers of boxes and trays, organized in such a way that when boxes will not be randomly spread out everywhere in a disorganized manner when preparing meals.

Day in and day out, the cafeteria and its workers provide meals to the thousands of students at Blair, playing an essential role in the transition back to school as well as throughout the rest of the school year.

As Secretary of Education Miguel Cardona puts in an article with the United States Department of Agriculture, food is a necessity of survival and of education. "Students’ success in the classroom goes hand in hand with their ability to access basic needs like healthy and nutritious meals," Cardona says.

The entire Blair community is immensely grateful for all the work that the cafeteria staff put in to keep Blazers fed and ready to learn every single day.