When former Olympian Dominique Dawes and then-Lieutenant Governor Kathleen Kennedy Townsend visited Blair on March 25, 2002, they were greeted by a red creature with black hair and silver horns — the Blazer. Luckily for the young gymnast, the figure in the Blazer suit was trying to flirt with her. But unfortunately for social studies teacher Lansing Freeman, men with red tails and horns probably were not her type.

During Sprit Club sponsor Susan Madden's seven-year tenure as "guardian of the Blazer," the mascot's costume has undergone a few changes, but none have strayed far from the original headpiece and suit introduced in 1988. Now Madden is seeking a change. The current head has been in use since 2000 and is no longer in its prime. "I thought maybe we could have a contest for someone to update it, to make him look a little bit different," she says.

From September to December, Madden accepted designs for a new Blazer outfit to replace the last headpiece and possibly even the full body. She received around ten submissions, from which she and Principal Darryl Williams narrowed the field down to three. Soon the final designs will be displayed in the media center, and Blazers will have the opportunity to vote for their favorite costume online through BILL.

Blazing through the ages

According to Madden, the Blazer was named the official Blair mascot in 1942, but it was not until 1988 that a costume was designed for a life-like Blazer. After attending football games and seeing mascots from other schools cheer on the crowds, the Student Government Association (SGA) decided to order a costume from a catalogue, then-SGA sponsor and current Assistant Principal Linda Wanner says. "We were very involved in the school and we wanted more school spirit and so we thought it might be a nice thing to have." 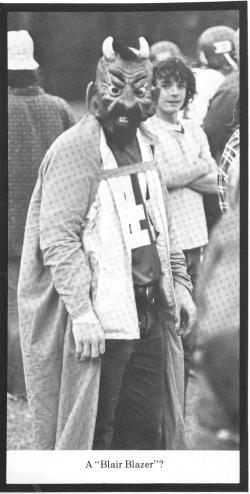 Photo: A student dresses up in his own homemade Blazer costume in 1973. Photo Courtesy of Silverlogue

Photo: A student dresses up in his own homemade Blazer costume in 1973. Photo Courtesy of Silverlogue

Though costumes can be expensive, funding didn't pose a problem back then. "From the money we raised from having homecoming dances, we had plenty of money," Wanner says. Picking a costume design came easily too. "We all liked it compared to others, that was the nicest one and we got it," recalls Wanner.

Even before the red, furry Blazer came into the picture, spirit was aplenty at Blair. In the absence of an official mascot costume, students often dressed up as the Blazer with their own creative getups. "There are some pictures in the yearbook that have people dressed up, with their face painted and the caps and hats to look like the Blazer," Madden says.

There is only one Blazer today, though many can represent Blair throughout the year. Madden has few requirements for a student to be the Blazer — applicants must be seniors and must submit a letter of recommendation from a teacher or another adult. "I need recommendations from the teacher, from someone, saying they would recommend them to represent Blair, because this is representing Blair," Madden says.

Tall or short, plump or skinny, the only physical requirement is that the applicant fit the suit. The one-size-for-all costume has clothed everyone from former principal Phillip Gainous, an ex-football player, to Freeman, who is much smaller than the six-foot, four-inch-or-so Gainous.

But desperate times often call for desperate measures. If someone who is scheduled to be the Blazer does not show up, Madden will begrudgingly relax her recommendation letter requirement. "If we're in a crunch, and someone says they're going to do it and they don't show up, I will go grab a person in the hall, a senior, and say 'would you like to be the mascot?' And they'll say yes or no," she says. Sometimes, Madden will even recruit a teacher ahead of time for the fun of it. 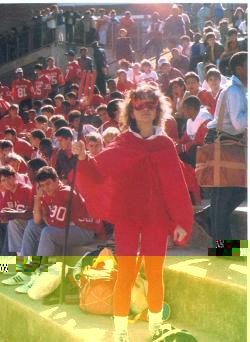 Five years later, Freeman still recalls his run-in with Dawes with a laugh. "She was as cute as a button, so I'm trying to flirt with her a little bit, but I had the Blazer on, including the head and everything. It was hard to get my 'mack' flowing," Freeman says.

Senior Vijay Baharani had a very different experience inside the suit, as he became the Blazer after being asked at the last minute. "I was there for the SGA helping with the activity showcase we have at the beginning of every year and BNC wanted to film InfoFlow with the Blazer. They were just looking for someone to wear the suit and they asked," Baharani says.

Unlike Baharani, Freeman, who filled the mascot costume numerous times in the span of a few years, was chosen because of his playful reputation. "The spirit lady asked me to be the Blazer, feeling that the silliness that some people think I possess would serve me well," Freeman says.

Although Freeman and Baharani served as the Blazer more than five years apart, their experiences were somewhat similar, as both were uncomfortable in the suit. "I was in the suit for like 15 minutes and when I took it off, I had red fuzz all over my body, my hair and everything and it was a pretty bad experience," Baharani recalls.

For Freeman, the suit and the required dancing were the most unpleasant aspect of being the Blazer. "The worst part was number one, how hot it was inside the Blazer and frankly, sometimes how you're expected to dance around and dancing is not playing to my strengths," Freeman says.

Even though Baharani and Freeman disliked the suit, they both enjoyed other aspects of being the Blazer, particularly the anonymity that comes with the job. Madden promises all potential mascots that she will not release their names, allowing the mascot complete freedom to 'bust a move' in the suit. "The most fun I had as the Blazer was when I would be walking through the hallways, encountering individual students and they'd be talking to me, not knowing who I was," Freeman says.

Overall, Freeman is happy with his experience many years ago as the Blazer. "The chance to be the Blazer, it's a fun thing… sometimes you don't want to do it again, but you do look back on it fondly," Freeman says.