As playoffs near, the 2011 Major League Baseball (MLB) season is wrapping up and once again neither the Nationals nor the Orioles will be playing October baseball. This time, however, there is hope for the future on at least one side of the beltway.

The Washington Nationals are 78-80 right now, with three games to play. That's a nine game improvement over last year and the team is likely to finish third in the National League (NL) East for the first time in franchise history.

What is even more impressive about the Nationals' record is whom they have done it with. Not only do they have the ninth youngest team in the majors, but their current starting lineup only features one player above the age of 30, a sign of the improvement that has yet to come. 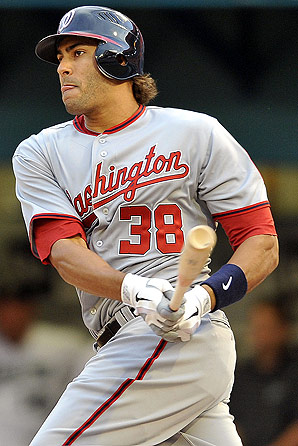 Photo: Michael Morse has surged into the spotlight while leading the team in home runs, batting average and slugging percentage

Photo: Michael Morse has surged into the spotlight while leading the team in home runs, batting average and slugging percentage

This season, the Nats saw the breakout of first baseman Michael Morse, who has a .304 batting average with 29 home runs and also saw the return of Stephen Strasburg, who has a 2.00 earned run average (ERA), along with the emergence of one of the strongest bullpens in the MLB, with Drew Storen and Tyler Clippard closing out games. The Nationals' drastic improvement this year shows potential for the team to make a real run for the playoffs in the near future.

However, on the other side of the beltway, the Orioles have not shown any signs of progress in the last few years. They are in dead last in the American League (AL) East (again) and only three other teams in the MLB have fewer than their 67 wins.

For every step forward the Nats have taken, the Orioles have taken one backwards. While Morse has had a breakout season, Orioles' right fielder Nick Markakis has seen a significant drop in his batting average, on-base percentage and slugging percentage. While the Nats now have a dominant ace pitcher, the Orioles' best starting pitcher has a 4.28 ERA. While the Nats have established a shutdown bullpen, the Orioles' closer has blown 25 percent of his save opportunities. The O's have made it clear that they are not strong enough of a team to compete against those in their division, including the Red Sox and Yankees, two of the most well-known teams in the MLB.

The Nationals will only get better given the depth of their farm system - which includes the nation's top prospect, Bryce Harper, and a plethora of young starting pitchers to choose from over the next few years. Meanwhile, the Orioles only have one true prospect in the minors right now, shortstop Manny Machado. Machado is the fourteenth rated prospect in the minor leagues, but besides him, Baltimore's future does not look very bright.

There will have to be some serious changes made in the Orioles' organization, if they will compete in the deadly AL East anytime soon. Although October baseball is not far away for the skilled and youthful Nationals organization, Baltimore still has a while to wait.