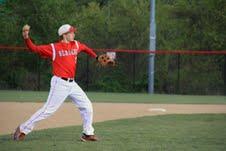 Already reeling from a two-game losing streak, the boys' varsity baseball team (2-4) added another loss to their record after falling 8-1 to the Blake Bengals (3-2). Blair lost control of the game in the second inning when the Bengals scored four runs off senior co-captain Richard Griner.

It appeared that the Bengals thoroughly dominated the Blazers throughout the whole game, but the teams had six hits apiece. The difference in the game was pitching. Blair gave up seven walks to the Bengals and had multiple wild pitches that aided Blake in building its big lead.

Griner pitched a solid first inning — only allowing one baserunner — but couldn't hold it together in the second. The four runs in the second demoralized Blair and limited the team's opportunity to win. Griner simply couldn't keep control of his pitches, according to head coach Eric Zolkiewicz. "Richard just lost his composure and his strike zone completely,” Zolkiewicz said. 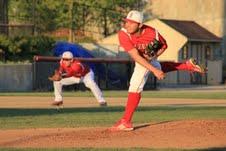 Zolkiewicz pulled Griner after 1.2 innings and inserted sophomore co-captain Neil Gahart into the lineup, who pitched the rest of the game. Gahart accounted for Blair's only offense when he stole home in the fourth inning.

The Blazers simply couldn't get into any rhythm offensively. Gahart said the team needs to stop leaving baserunners stranded. "We have to hit when we have runners in scoring position. We can't leave guys on second and third all the time,” Gahart said. Blair left multiple runners on third yet failed to drive them in throughout the game. A prime example of this occurrence came in the final inning, when Blake made the final out with the bases loaded for Blair.

After registering its third loss in a row, Blair must attempt to right the ship midseason. Coach Zolkiewicz is optimistic. "We're a young team, so we're growing and it's an adjustment. The ball just isn't breaking our way. It seemed like everywhere we hit it today they had a guy standing there,” Zolkiewicz said.

Gahart believes the team needs to work on its fundamentals. "We need to stop walking people and giving other teams free bases. We're not good enough to just come, play badly and win,” Gahart said.

The varsity baseball team will play its next home game on Monday, Apr. 16 at 7:00 against the Sherwood Warriors.