The hype surrounding the varsity football team's opening home game came to a crashing halt, as the Blazers fell to the Blake Bengals, 21-12, once again starting the season off with a losing record.

Starting quarterback sophomore Alex Egber didn't have to wait for a snap to touch the ball, returning the opening kick-off. A magnificent run to the opponent's one-yard line raised the packed home crowd to its feet, but the drive ended in a fumble that Blake recovered in the end zone for a touchback.

The Bengals then promptly marched down field and scored on a short touchdown run before the first minute of the first quarter had elapsed, taking an early 7-0 lead. But the Blazers were undeterred. 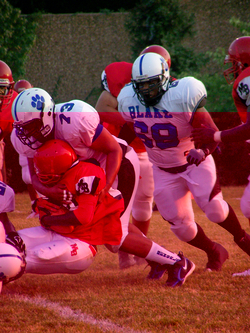 Photo: A Blazer is tackled by a Bengal in the first quarter. Blair lost 21-12.

Photo: A Blazer is tackled by a Bengal in the first quarter. Blair lost 21-12.

The Blair offense was hesitant to throw the ball, instead focusing on the ground game by letting junior running-back Keith Ayensu move the chains. On three carries, Ayensu ran 61 yards to Blake's 19-yard line before converting a fourth down deep in the red zone. Egber then chose to throw to the end-zone, but a Blake defender intercepted the pass at the one-yard line, resulting in Blair's second red zone turnover.

The Blazer defense was able to muster a stop, forcing a Blake punt to end the first quarter. The ball stayed on the ground, as the Blair offense marched downfield, capped off by a touchdown run by junior running back Jonathan Haughton. A failed two-point conversion left Blair down 7-6 with 9:56 left in the half.

The Bengals passing game was fairly quiet as well on their next drive, preferring to run the ball up the middle. Blake crawled up the field, eating more than six minutes off the clock. A lob to the left corner of the end-zone near the end of the half found the outstretched hands of a Bengal receiver, increasing Blake's lead to 14-6 after the extra point.

With slightly more than three minutes before the half, Blair aimed to get even. Senior Enuma Nzesi returned the ensuing kick off to the 35, but Egber and his receivers struggled to connect. A failed fourth down conversion returned the ball to Blake on the Blair 38-yard line with 48 seconds remaining in the half. The Bengals proceeded to execute an eight-play drive that ended with a short touchdown run, putting the halftime score at 21-6.

In the third quarter, Blake went to the air, launching 40-yard attempts downfield. The Blair secondary was able to easily defend against the long ball though, and soon returned the ball to the offense. But the Blazers stalled and were forced to punt on their next two possessions. Finally, a Bengal fumble late in the quarter was recovered by Blair, sparking a long drive. Haughton exploded on a short pass, crossing to the right side of the field and entering inside the Blake 10-yard line before being tackled.

The defense went back to work, stumping Blake again and giving the offense another chance at catching up. With 6:13 left in the game, Egber tossed a beautiful 40-yard bomb to Haben Ghebrenescei. Nzesi then scored on the ground to cut the deficit to 21-12. Blair elected to go for the two-point conversion again, but was once again unsuccessful. 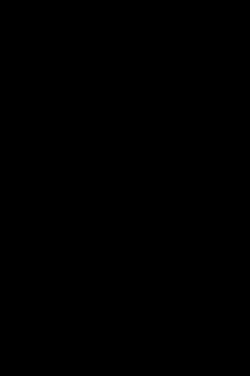 Photo: Cheerleaders perform stunts on the sidelines to pump up Blazer spirit.

Photo: Cheerleaders perform stunts on the sidelines to pump up Blazer spirit.

Though they gave up no points in the second half, the Blair defense was unable to prevent Blake from burning precious minutes off the clock. A late fumble by the Blake quarterback caused the Blair faithful to hold their collective breath, but the offense was able to recover, eliminating any hope for a miracle. The final score stood 21-12 in favor of Blake, starting the 2007 Blair season on a down note.

Despite the loss, head coach Jeffrey Seals remained optimistic about the team's improvement and performance. "We are a lot better than last year," Seals said. "Little mistakes hurt us, but they're correctable in practice."

Although the defeat was categorically exhausting and discouraging, players were able to note their mistakes and remain hopeful. "We had a lot of good drives," said Egber. "We've got all the pieces," added senior center Alex Wang. "We just need to piece them together."

Seals told his team afterwards that he was not disappointed about the result. "We had a lot of good moments," he said. "We drove it down the field, but made mistakes when it came to finishing the drives. More consistency will give us those points and the win." Seals then made sure the focus was where it was supposed to be. "Now it's time to gear for next week at Northwood," he concluded.

Blair's next game is at Northwood on Sept. 14.