The varsity girls' basketball team that took the floor on Friday night against the Blake Bengals bore little resemblance to the team from previous games. While the Blazers played a controlled offense, they struggled to complete their passes and were plagued with turnovers, a problem that the team hasn't had in previous games. The Bengals pounced on the Blazers' new vice, using a fast paced transition game to secure their 72-28 victory. 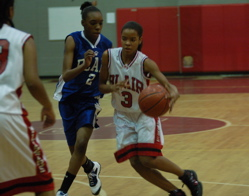 Photo: Junior Kalisha Holmes drives down the court to the basket. Photo by Andrea Lynn

Photo: Junior Kalisha Holmes drives down the court to the basket. Photo by Andrea Lynn

Junior Kalisha Holmes was blunt about one of the team's biggest problems. "We are such an inconsistent team," Holmes said. "We'll fix one problem but then something new will start acting up. This game the problem was turnovers, and that allowed them to score."

With eight turnovers in the first quarter, the Blazers found themselves in a 22 point hole after the first eight minutes of play. The Bengals opened with three layups, heaving long passes down the court to capitalize on their defensive steals. After Blair head coach James Mogge called a time out, the Bengals returned to the floor with an aggressive full court press. The Blazers struggled to break the press as the Bengals continued to pick off Blair's sloppy passes and extend their lead to 18-0.

Sophomore Jenny Williams added Blair's first points of the game as she drove through the press and pulled up for a jumper from the corner of the lane. The Bengals tacked on six more points before the buzzer, finishing the quarter ahead 24-2.

Mogge attributed Blake's early lead to the Bengals' size and speed, which allowed them to shut down the Blazers' offense. "Our style is to take it easy, run the offense, get the ball inside to the post and then kick it back out if we don't score," Mogge said. But because of the Bengals' big and fast players, the Blazers were unable to penetrate their defense and work the ball inside. According to Mogge, the team panicked and resorted to bad passes that the Bengals turned into easy points.

In the second quarter, the Blazers settled down and limited their turnovers to outscore the Bengals 9-5 in the first half of the period. Williams recovered a rebound and knocked down a three pointer before adding two more points a few plays later. Junior Molly Martinez powered up a layup from the block and brought the score to 28-9. The teams continued to trade baskets until the Bengals extended their lead to 29-11.

At the end of the quarter, the momentum shifted back to the Bengals as they knocked down jumpers from the wing and behind the arc on two consecutive plays. The Bengals finished their six unanswered points with a swish from the foul line and headed into halftime ahead 35-11. 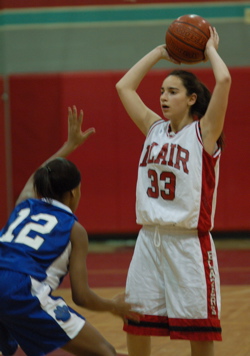 Photo: Sophomore Jenny Williams calls out a play to set up the Blazers' offense. Photo by Andrea Lynn

Photo: Sophomore Jenny Williams calls out a play to set up the Blazers' offense. Photo by Andrea Lynn

Blake continued to dominate in the third quarter, outscoring the Blazers 24-13. On defense, the Bengals double teamed the ball and came up big, scoring seven points off steals in the first three plays of the quarter. The Blazers responded with five quick points to bring the score to 42-16. Junior Meghan Cadigan worked the ball in to junior Regat Buluze in the post, who spun her defender for two points. On the next play, Martinez snagged a defensive steal and slung the ball ahead to Williams, who drove downcourt before pulling up for a jump shot.

But for every two points the Blazers scored, the Bengals responded with four. Blake continued to cycle their starting lineup onto the floor, a practice that most schools avoid to show good sportsmanship to their opponents. "Blake has terrible sportsmanship," Holmes said. "Usually if a team bursts out to an early lead or is so far ahead, they put in their bench players."

Holmes added four points and Cadigan and Williams each added two points to finish out the quarter down 59-24.

In the final quarter, the Bengals shut down Blair's offense until the very last minutes of play. Blake went on a 7-0 run before the Blazers were able to put points on the board. Holmes grabbed a defensive steal and drove down the court, connecting with Williams as she streaked down the other side of the floor for a layup. The Bengals notched two more baskets to bring the score to 26-70. In the final twenty seconds of play, junior Christina Mullen stole the ball on defense and passed it to Williams, who worked the ball up to Holmes for a jump shot. But with less than ten seconds left, the Bengals still had the last word as they tore through Blair's defense for an open layup, bringing the final score to 72-28.

Williams led both teams with 15 points on the night. Holmes added six points and Martinez added three while Cadigan and Buluze chipped in a basket each. On the Bengals' side, junior guard Danielle Luckett led the team with 14 points and sophomore guard Danielle Douglas finished close behind with 12. Of the 14 players on Blake's roster, 12 players contributed points to Friday night's game.

Mogge was disappointed with the Blazers' performance and with the progression of the season as a whole. "I thought we started out the season inexperienced and that by now we'd at least be making progress. But we're not making any progress, and it's getting frustrating," Mogge said. Mogge echoed Holmes' feelings and cited the team's inconsistency as a major obstacle that is stopping them from improving and winning games.

With only one win on the season against Cesar Chavez High School, a school from outside of Montgomery County, the Blazers are caught in a rut. "We need to try to overcome some of the obstacles in terms of our talent and figure out a way to win games," Mogge said.

The varsity girls' basketball team plays its next home game on Feb. 5 against Magruder at 5:15 p.m.