It took a little bit of time for things in Janet Berry's life to fall into place. She describes her hometown, South Bend, Indiana, as a place where "many people are from but not many stay." Early in her life, Berry saw art as her ticket out. But despite being the "artist in the class," she was hampered by a high school that offered only one art class.

Undeterred, Berry landed herself at St. Mary's College, the all-female sister school to Notre Dame. Majoring in art, she traveled to Chicago and realized another thing she liked to do – teach. In Chicago, Berry taught art at a high school before traveling to Wisconsin to teach in elementary school. Not all her time in the classroom was spent as a teacher, though. Berry continued to attend college classes to earn a Masters degree in Fine Arts at the Art Institute of Chicago and the University of Wisconsin. 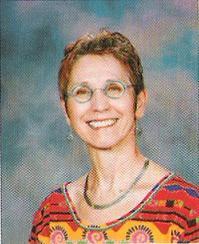 But Berry soon had to learn the art of multi-tasking as she tried to balance her school life with her new family. In 1980, Berry moved to Silver Spring with her husband and 11-year-old son. During the years her son attended high school at Blair, Berry switched between working at an art studio and teaching her passion in Prince George's County. After her son graduated as co-valedictorian in 1987, Berry decided to teach for good in order to support her son's enrollment at Princeton.

In 2000, Berry landed a teaching job as a long-term substitute at her son's old high school, Blair. With no job opening at the end of the year, Berry headed to Walter Johnson High School. But in 2004 she found herself back at the school she had once frequented as a parent. "Blair was always my first choice," Berry remembers. She's been at Blair ever since.

Even as a teacher, Berry excels in her role as an artist. When asked if she's received any rewards for her artwork, Berry replies in nonchalant manner. "Yes, a few at art shows. But everyone gets them eventually." The key to her modest attitude can be found in what really matters to Berry - art. It's not about the prizes or being recognized, but about expression, she explains. And what better way to epitomize that than being an art teacher? "In my experience, you know someone really loves art if they are willing to teach it," Berry says.

For now, Berry is satisfied. Her son, the Princeton graduate, is a doctor. She's passing on what she loves best and summer is just around the bend. But there's something inspiring about the look in her in eyes and the determination in her voice when she talks about the future. "One day, without a doubt, I will return to the studio," Berry declares.