Varsity football wins second in a row; gives fans "a game worth watching"

After squandering a 13-point lead last year against Northwood in what would be their closest loss of a winless season, Blair's varsity football team played with that lesson in mind as they routed their geographic rival Friday night, 41-12. 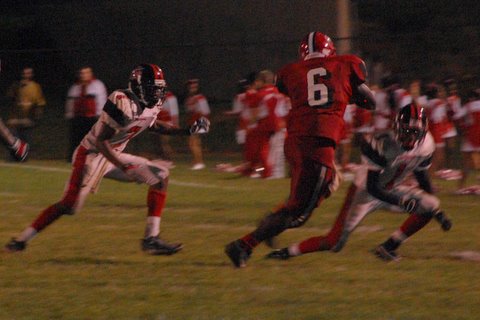 Photo: Senior running back Dayne Bolt rushed for 171 yards and two touchdowns in the Blazers' 41-12 blowout of Northwood.

Photo: Senior running back Dayne Bolt rushed for 171 yards and two touchdowns in the Blazers' 41-12 blowout of Northwood.

The Blazers ended a slow start plagued with penalties by opening the game up with four touchdowns in the first half, taking a 28-0 lead into halftime. The red-and-white were dominant on both offense and defense, racking up 428 total yards and knocking Northwood off their passing game.

Blair head coach Jeffery Seals was pleasantly satisfied with his team's victory. "I didn't know it was going to turn out that way after we had so many mistakes early on," Seals said after the game. "But they turned it around and focused, and if that's something we can do all year, then we have something special."

The Blazers (2-0) have already amassed 88 points through two games this year – 27 more points than last season's grand total of 61. However, the touchdowns are not the result of long, time-consuming possessions. Instead the Blazers highlighted their athletic superiority in big plays, scoring five of their six touchdowns against the Gladiators in plays of 41 yards or longer.

The longest touchdown came from senior running back and linebacker Dayne Bolt in a 51-yard dash up the right sideline. Bolt, coming off a four-touchdown performance at Blake a week earlier, rushed for 171 yards and two touchdowns in just nine carries.

Senior quarterback Victor Wang threw for 86 yards, showing the Blazers could travel through the air as well. "Our line played great, allowing us to make those big plays on the ground and in the air," Wang explained.

One bittersweet note to the otherwise triumphant night for Blair was the ejection of senior co-captain and defensive lineman Leo Kengni. The incident, which Kengni insists was a misunderstanding, also suspends him from play for Blair's next game at Gaithersburg.

While Seals admitted the absence of Kengni will be felt, he's confident the team will be deep enough to compensate. "We'll miss Leo, but it's a team game," Seals said. "All it means is that the next person has to step up."

In the first quarter, Blair wasted no time in establishing dominance in another area of play: defense. It took the Blazers less than a minute to force Northwood to punt. In addition, Blair limited the Gladiators to just two completions in the first half – both for short gains – with intense pressure on the quarterback and swarming coverage of receivers. This severely affected Northwood, whose offensive strategy relied heavily upon throwing the ball.

Senior running back and lineman Jonathan "Jamrock" Haughton put Blair on the board with just over five minutes remaining in the first quarter. After taking a handoff to the left, Haughton was able to break through a pack of Gladiators and quickly distance himself for a 42-yard touchdown run. Junior kicker, running back and cornerback Andrew Gondor added the extra point, a event noteworthy because of Blair's inability to kick extra points a year ago. Gondor was a perfect five for five in extra points against Blake. 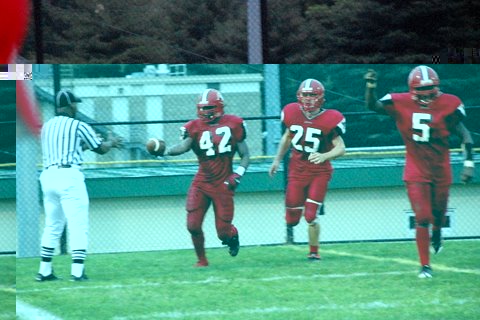 Blair's defense continued to frazzle Northwood, highlighted in a forced fumble just two minutes later which Kenghi returned a short distance for the touchdown and a 14-0 first quarter advantage. Bolt and Gondor led the defense with five tackles each.

Wang made his presence known in the second quarter, hitting Gondor on a left-wing route for a 45-yard touchdown within the first minute. Down 20-0, the Gladiators threatened for the first time, entering Blair's red zone on a mix of short throws and runs. However, Haughton and senior lineman David Burrnette sacked the Northwood quarterback on third down, and junior cornerback Paris Essouma tipped away a pass in the end-zone to avert the danger and cause the turnover. Northwood came close again a few minutes later, but fumbled the ball into the back of the end-zone to return possession to the Blazers.

With two minutes left before halftime, Bolt got his first two carries of the game. On the second one, he liberated himself from the Northwood defense near half-field, then outran the pursuing Gladiators for a spectacular touchdown. Junior captain and quarterback Alex Egber hit Gondor on a slant run for a successful two-point conversion and a 28-0 halftime advantage.

Blair continued the spectacular offensive display in the second half, adding to the scoreboard on a 41-yard pass from Wang to Haughton and a 51-yard run by Bolt. Northwood ended Blazers' hopes of a shutout on a short run in the third quarter, then scored a second time as time expired in the game for a final 41-12 score.

Playing against a legacy in their bad reputation and a rival in Northwood, the win in the "Battle of the Boulevard" was well received by the Blazers. "It's so great to finally give the fans a game worth watching," Wang said.

Bolt added to the sentiment. "This team this year is special. Everyone can feel it – on the field or in the stands." Bolt quickly placed the win in context, however. "We're only two games in," he said. "That means eight more games, then hopefully the playoffs. We're not even close to done."

Blair faces their first big test against Gaithersburg – who is also 2-0 – next Friday, Sept. 20. "Tomorrow, we start preparing for next week," Seals said. "One step at a time."